A couple weeks ago, I got a call because there was a gopher outside staggering around, obviously disoriented, even falling over onto its side. When I found it, it was lethargic and easy to approach and I picked it up and carried it inside without any struggle or fight. It was loaded with fleas. The folks that called suggested that it may have been poisoned. Since catching this one, friends and colleagues have mentioned seeing other sick or dead gophers around this part of Golden Gate Park, suggesting that this may not be an isolated case.  A couple people even suggested that the city may be putting out poison baits to reduce the huge numbers of gophers in the park.

So we did a little asking around to find out whether anyone is using poison in Golden Gate Park, and the answer appears to be an emphatic, “no.” No one in the Academy is using poisons, not even around our precious collections spaces. In fact, the entire park is off limits to toxic herbicides, fungicides, and rodenticides. So we

spoke with our veterinary doctor in the Steinhart Aquarium, Freeland Dunker.

Freeland is very knowledgeable about animal diseases of all sorts, and almost immediately suspected raccoon roundworm, or Baylisascaris procyonis. This is a common roundworm found in a large percentage of raccoons (between 70-100% of west coast urban raccoons are infected with these worms!), and is very likely endemic to the huge population of raccoons in Golden Gate Park and nearby Sunset and Richmond neighborhoods. The worms normally live in raccoon intestinal tracts, and raccoons can shed thousands of eggs in their feces. The eggs are robust in the environment, and can live for a long time in the soil or in a raccoon latrine.

When other species ingest the eggs, the eggs hatch in their intestines and try to find a good place to settle. But since the larvae are not in a raccoon, they don’t find an acceptable place to settle, and they burrow through the intestinal walls and wander around inside the body looking for a place to settle. These wandering larvae cause a disease called larval migrans, or literally, migrating larvae. As these worms burrow through the body of the host, they leave a trail of destruction. Worms often migrate to the eye, brain, and meninges, causing encephalitis, neuroretinitis, central nervous system damage, and death. Our recent sick gopher was likely an advanced case, and probably had the worms in its brain and spinal column. 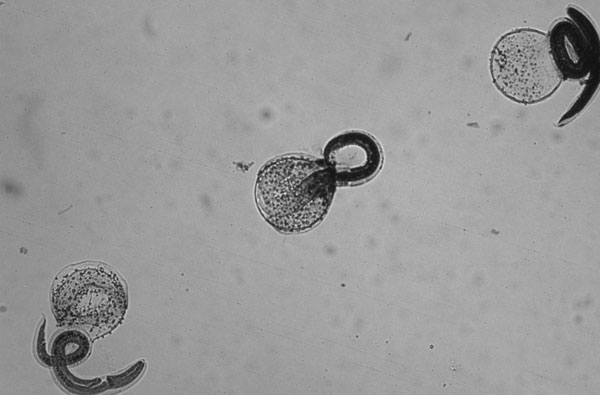 Baylisascaris larvae, which move through the body of its host leaving a trail of destruction and causing the disease condition known as "larval migrans."

Although it is extremely rare, cases of Baylisascaris are known in humans. The CDC has a website that discusses Baylisascaris as a potential emerging human disease. Note that 4 of 11 known human cases were from California. All of the human cases were severe or fatal, and often most aggressive in young children. The damage done by migrating worms can be permanent, and neurological damage to the brain and eyes is usually the first sign of infection, and by then, it is usually too late to do anything but prevent additional damage.

Next time we find one of these gophers, we will try to confirm the diagnosis, and report back. Unless you're a gopher, there’s really not much to worry about.  You can’t catch this directly from gophers, as they are not typical hosts and probably do not shed eggs (but you could catch it from eating gophers…) But it is worthwhile to keep an eye on your small kids and definitely don’t let them play near raccoon feces.