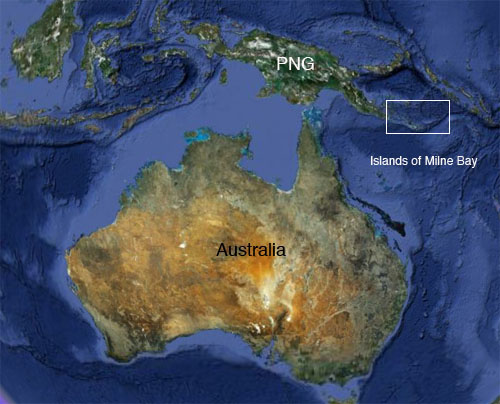 EVER SINCE I was an student working in PNG, I've dreamed of surveying and studying birds in the outer most remote islands of Papua New Guinea and the western Pacific. These places seem elusive - they are difficult to get to, poorly known, and only a few of the largest and most significant islands have been visited. Even those that have been studied were visited mostly long ago, by Albert Meek in the late 1800s and early 1900s, by the Whitney South Seas Expedition in the 1920's and 1930's, and by a few others, including Jared Diamond more recently. But there is much work yet to do, and much to be learned by working in these pristine places. 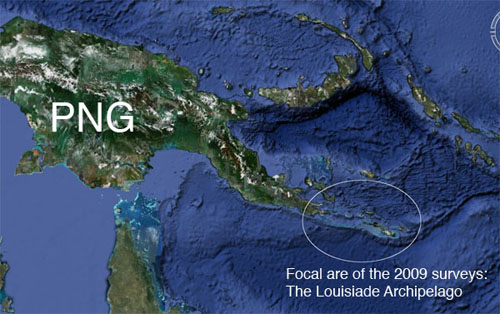 This fall, we are sailing with Bruno and Carmen Montel, on their beautiful yacht, Dalai, to begin working in the islands of Milne Bay Province, Papua New Guinea. We are surveying bird populations on a few islands in the major groups of the Louisiade Archipelago, and we are experimenting with traveling by sailboat. Sailing is a "green" way to get around - we are mostly powered by wind, using solar to recharge batteries, and using the boat as a "base camp" so that we have less impact on the islands we visit. It is also very practical, as fuel is expensive or impossible to get in these remote areas, and the boat provides a comfortable and safe base. By reducing our need for fossil fuels, we make it possible to be out in the remote areas for longer periods of time. One must remember that especially the low islands are threatened by global warming and sea level rise. Thus it is important to sample these islands while they are still here, but not to do so in a way that only hastens their demise. 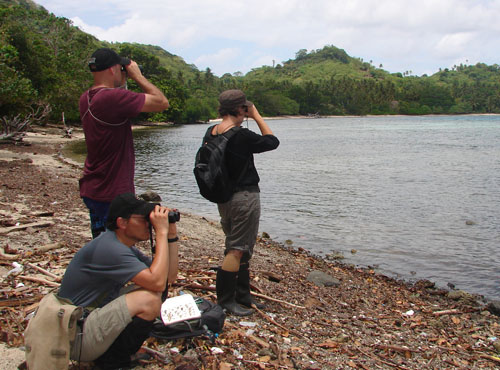 Three of us from the California Academy of Sciences (Jack Dumbacher, Tiffany Bozic, and Peter Gibert), left for New Guinea in late September. We met with Bulisa Iova, Chief Technical Officer at the Papua New Guinea National Museum in Port Moresby in early October. We quickly obtained our research permits from the good folks at the Department of Environment and Conservation and at the National Research Institute in Port Moresby, and we were on our way to Alotau, the capital of Milne Bay Province. Once in Alotau, we provisioned, and we met with Bruno and Carmen and had our first tour of their ship, Dalai. It is a beautiful 54' sailing boat that Bruno and Carmen built themselves by hand (and you can learn more about it here). Dalai is a luxury cruising sailboat, and they have been sailing it around the world for the last few years. 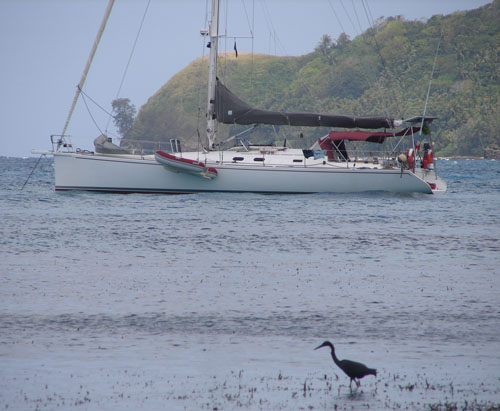 We boarded Dalai on 5 October, and sailed the next afternoon after we obtained the necessary permits from the provincial officials, and after we received excellent advice from Gretta at Napatana Lodge and David Mitchell from the local Conservation International office in Alotau.

We sailed first to WagaWaga, where we anchored for the night. We were up
the next morning early and under way for the Engineer Group, just east of
Basilaki Island. Our first port of call was the island of TubeTube
(pronounced Too-bay-too-bay), also known as Slade Island on the nautical charts. 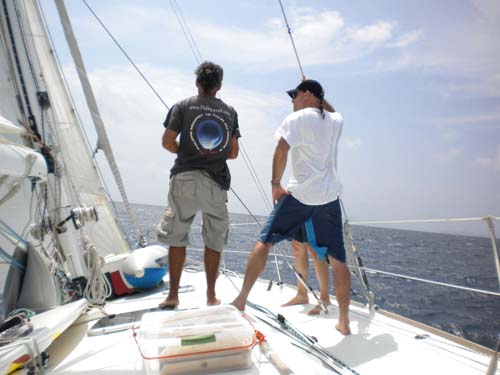 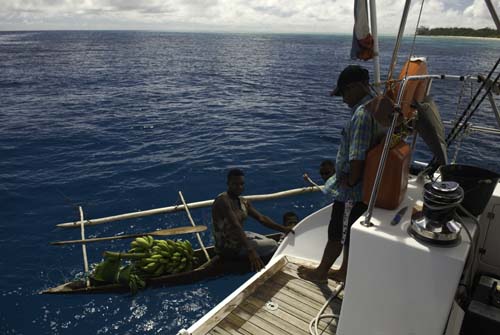 When we first arrive at a new island, we are often greeted by locals who
help us find the best anchorage, and who offer fresh produce and other goods
for trade. Here is Bulisa talking with two guys in a local canoe who are
offering bananas and fresh greens. We rarely pass up the opportunity to get
fresh produce. 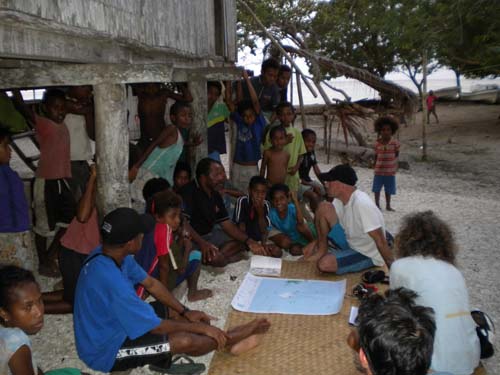 Next, we speak with the local officials - usually the councilmen or
landowners - to get permission to do our work on the islands. In many
places, including TubeTube Island, the whole village turned up for the
discussion, and everyone weighed in, asked questions, and taught us the
local names for the birds. This was really helpful and fun, and we made
lots of friends who not only helped with the survey work, but who traded
other items or services. 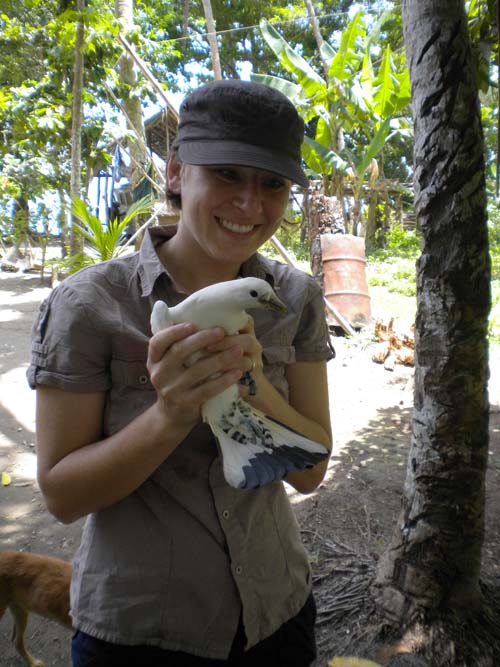 Many of the islanders kept caged birds like the Eastern Black-capped Lory and Pied Imperial Pigeon, and they encouraged us to sample DNA and RNA from their local captive birds as well. 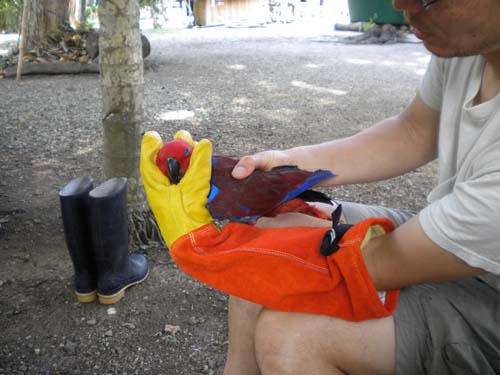 Even after only a couple weeks, we are starting to see some interesting
patterns. Many bird species are rare or missing from the islands with
people, but are common on islands without people. These include the Varied
Honeyeater, Rufous Fantail, the Mangrove Golden Whistler, and the Louisiade
White-eye. Conversely, there are many bird species that are common on
islands without people, and are less common or missing on islands without
people these include the Metallic Starling and Singing Starling. There
are many potential reasons for these differences, including that humans and
our livestock may be spreading introduced pests, including introduced
diseases. This is why we are sampling RNA and DNA: to look for viruses and
other diseases that may correlate with bird abundance and distribution. 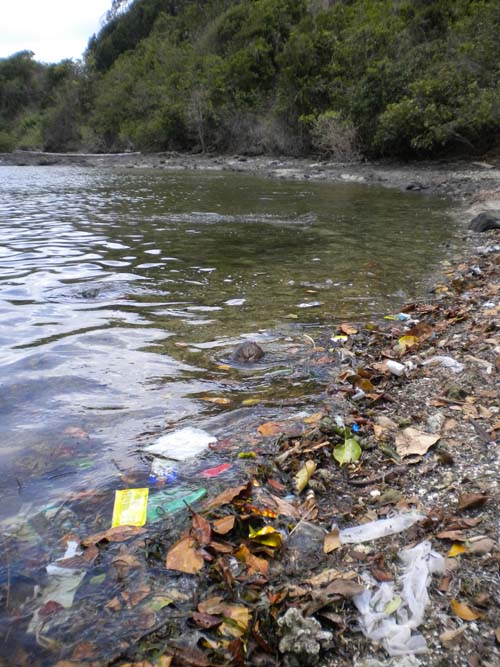 There is another human impact that we see ubiquitously on all of the
islands. This is plastic waste. It is amazing how many shoe soles, plastic
bags, discarded lighters and other trash accumulate on even these remote
islands. Even if we spent a day gathering up and burning all of this waste
(and there would be A LOT!) within a couple days, the beach would be full
again. Nearly every village we visit has hammocks made of washed up fishing
nets, tokens made of large floating GPS locators for nets, even one had a
huge aluminum pontoon buoy. It is good that these are removed from the sea,
as they do untold damage to fish and marine mammal populations, and the
larger items could damage or sink a boat like ours if we rammed it while
underway. 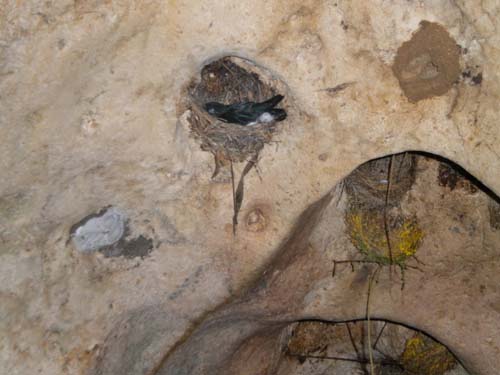 We've also seen some really special things on some of these islands. These
include a cave with nesting Glossy Swiftlets, with the adults flying all
around us. 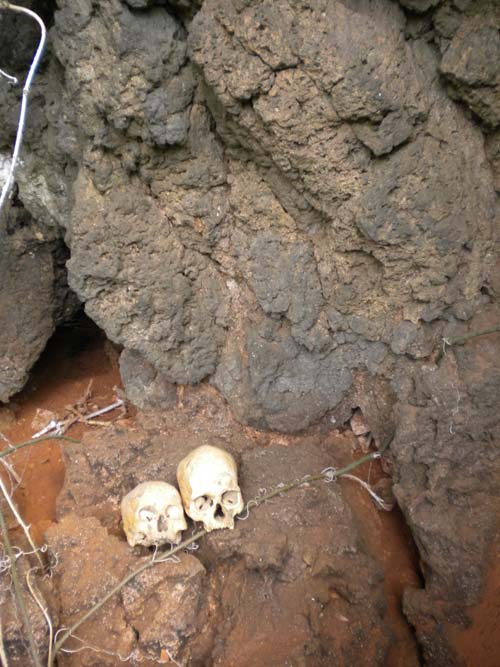 One of these caves also had some human bones and skulls in it. We felt a
little uncomfortable going to these caves, but the local people said that
this was not their burial place or the burial place of their ancestors, but
that these people were from "before" they lived there. Still, we only shot
a couple photos and left the place undisturbed. 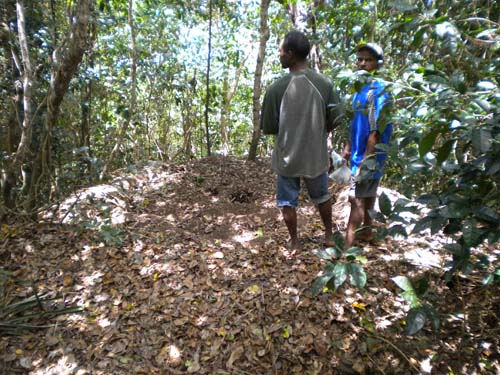 Probably the largest bird nests in the world occur in PNG these are the
nests of the megapodes. In this region, we find the Orange-footed Scrubfowl (Megapodius reinwardt), which is actually one of the smaller megapode species, but it still has a very large nest. Rather than incubate the eggs themselves, the males scrape up large masses of vegetation. As the vegetation rots, it heats up and
provides the necessary moisture and warmth for the incubating eggs. One nest can hold many eggs at any given time. Here is a photo of a scrubfowl nest from Skelton Island, with two men standing on top of the mound. 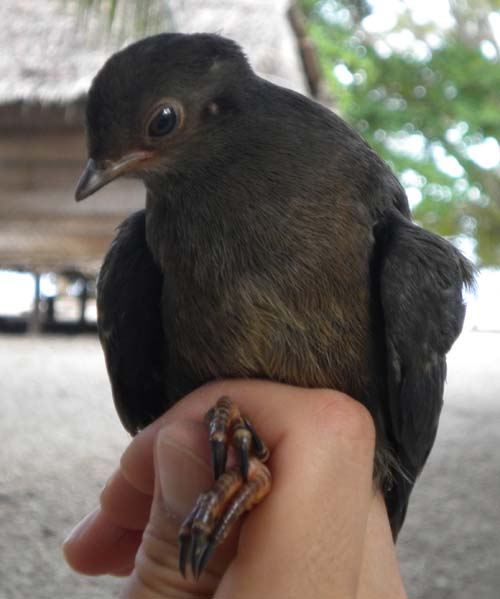 Here is a photo of a young scrubfowl that emerged from the nest
within the week. Check out those giant feet - when that bird is an adult,
they will be used for building these giant nests. 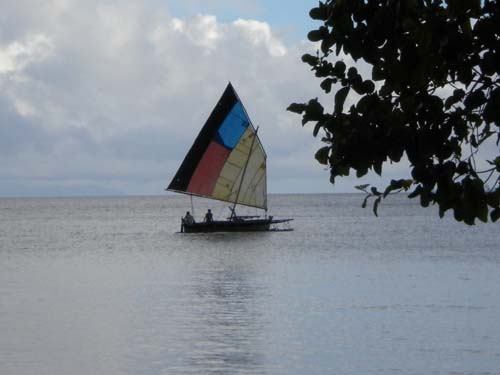 The local people in these islands still sail the traditional sailing canoes.
Young boys have small ones, and like bicycles in USA, the boys use them to
zoom around the vicinity of their island. The men have large ones that can
carry 20 or more people and their cargo, and they go very long distances.
We see them commonly, and as we travel west to east and further and further
from towns, the sailing canoes are more and more common. Here are a couple
beautiful sailing canoes that we passed while sailing from Watts Island to
Hammock Island. 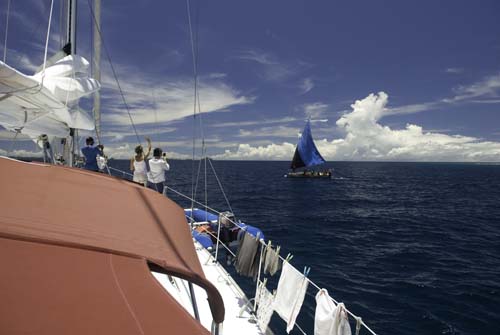 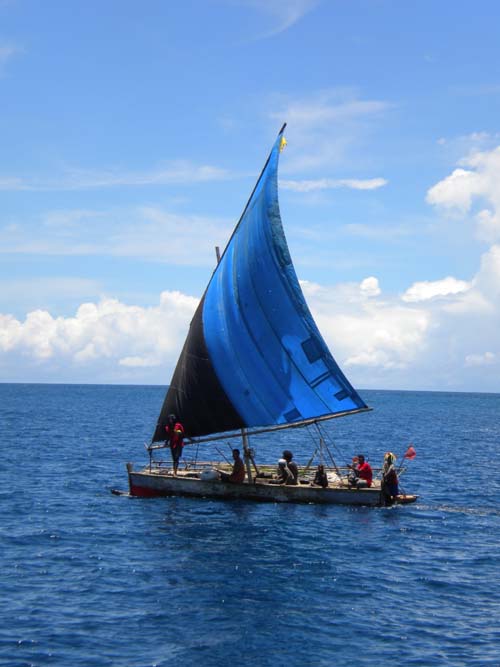 We hope to see more of these, and we will be visiting Panapompom Island in the Deboyne Island Group, where the craft of making sailing canoes is very well developed and refined. The Deboyne Group produces many of the traditional sailing canoes for the region. 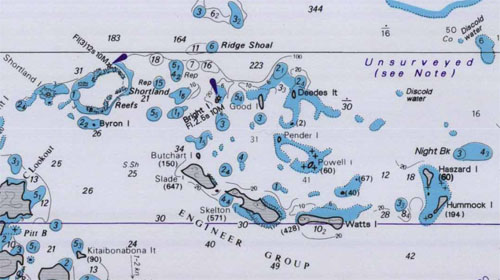 Sailing between islands can be challenging. Although we have some charts
for navigation, we cannot rely on them. There are some hazards that are not
clearly charted, and there is always potential that even those that are
shown are not accurately placed on the map. 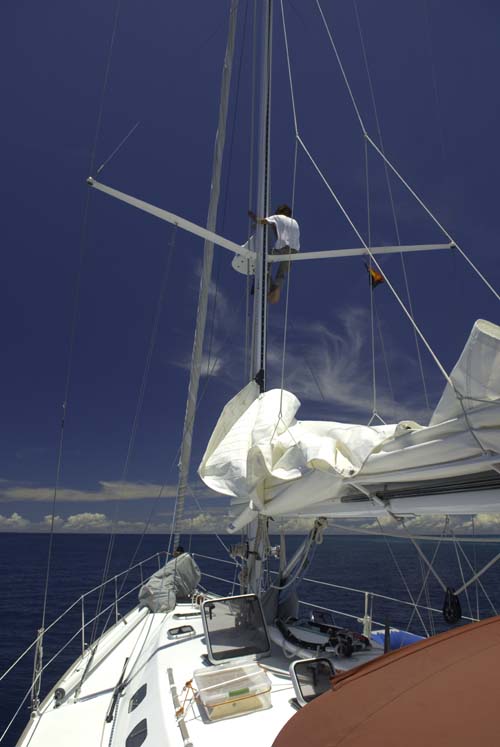 So far, we have found the maps to be fairly reliable, but we use backups and are always on the lookout. In this photo, Aladin is sitting atop the spreaders looking for submerged reefs or other hazards. 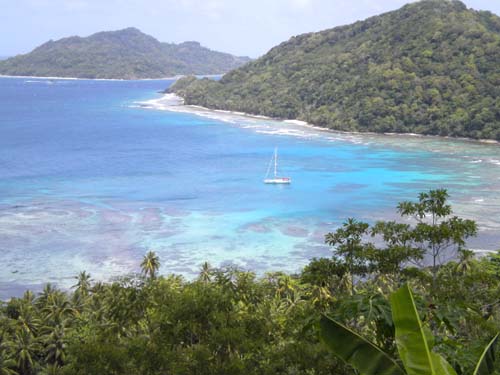 Finding good anchorages is also tricky. With steady winds (usually between
15-30 knots out of the SE, we typically have to find good sheltered
anchorages to the NW in the lee of each island. Bruno and Carmen are expert
at getting us in and out of tricky anchorages, and they work seamlessly
together as a team. 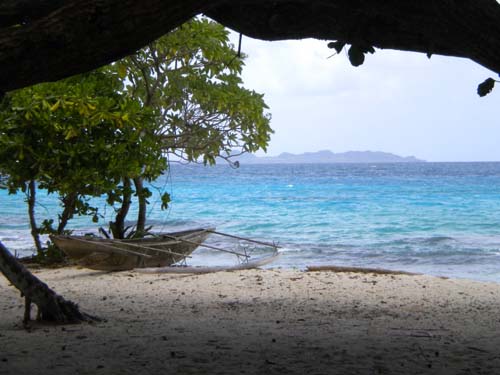 In the end, the sailing is half the fun, and we see lots of wildlife along
the way, including seabirds and dolphins. 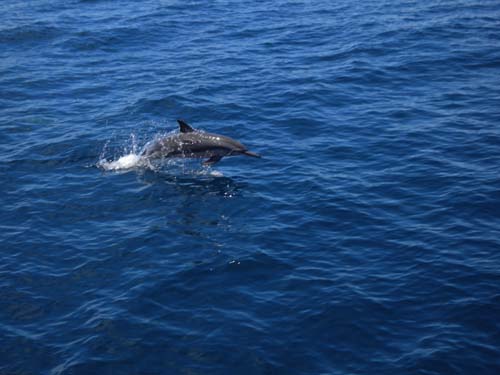 Today, 20 October 2009, we are back in Alotau, resupplying. We will also be picking up David Mindell, the last member of our team, who arrives in PNG later today and flies to Alotau tomorrow. We are hoping that he makes it safely and is not too jetlagged, as we have a long sail to do as soon as we pick him up, to head to Hammock and Hazard Island to continue our survey work. 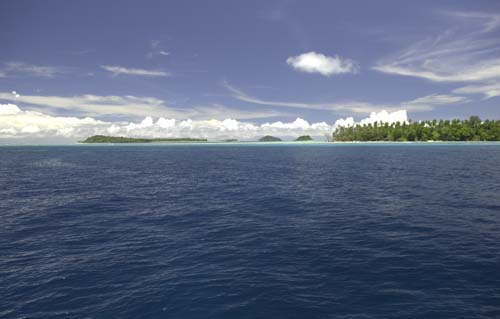