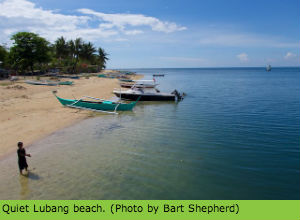 Well, we've just returned from Lubang Island, and I’ve never been to a more remote, more rustic place in the world.

The boat ride we were told would take three hours ended up taking five, but the sea was calm and we had a beautiful ride out. We saw dolphins, jellies, and tons of flying fish. When we first pulled up at the port, there were probably 50 people who came out to look at us. I have no doubt we were the first Americans many of them had seen—kids were yelling, “Power boat! Look, a power boat!” and running over to check out our relatively modest, 15-foot whaler-type boat. 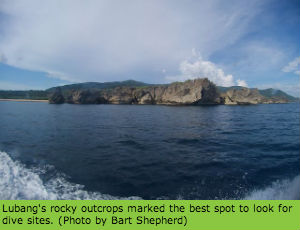 As soon as we arrived, four of us took off in the power boat to scout for the dive locations for the next two days. We looked for rocky outcrops on the end of the island facing the drop-off into the South China Sea, and we used side-scan sonar to find rocky areas in the 200- to 350-foot-deep range. After a few stops, we found a spot to dive, so Elliott and I suited up and dropped into a dive site we named “The End of the World.” We did a (relatively) quick pass on the site—buzzing down to 300 feet on scooters and then taking our time coming back up—the total length of dive was 71 minutes, which is about as quick as you can do a dive like that. 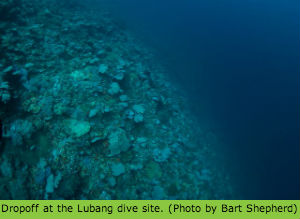 We saw all kinds of interesting fish and invertebrates even in that short time, so we knew this was the spot we'd be diving over the next two days. What’s really amazing is that I have no doubt Elliott and I were the first people ever to see this reef. It's mind-boggling to realize that more people have been in space than have been to this spot on the Earth!

We spent the next two days revisiting the site and collecting animals (both live and preserved) to bring back with us. It was a series of really long days, as it took close to three hours to motor from our hotel at the port to this site on the other end of the island. We’d do a dive, then try to motor back in time to beat the sunset so that we could actually see the channel back to the port! We did two big dives there, including my own longest (290 minutes) and deepest (354 feet) dive to date. The surface water was 90 degrees, but the deep reef was 73 degrees, so we really felt that temperature drop on the way down. Brrrrr! 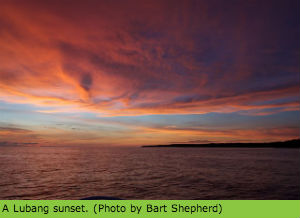 We collected an undescribed species of damselfish—a cute little orange-and-white fish—to bring back to the aquarium as well as a bunch of other rare fish. The two guys we're diving with from Hawaii are really good at catching fish underwater—they got ten fish for every one that I could catch!

This morning, we packed up the ferry and came back to Mabini. (We've got the fish we collected swimming in two kiddie pools here at the resort where we're staying—pretty cool that we can build a temporary, portable aquarium wherever we go!) The sea was fairly rough, so we had a pretty bumpy ride for the six hours it took us to get “home." I’m feeling the rocking right now, and will definitely be rocked to sleep soon!

All in all it was an amazing adventure. I was really shocked by the isolation and simplicity of the lives that the people there are living, and the reefs were very healthy, with loads of fish—including some really big and rare species. A few folks on our team saw a manta ray, and we saw several napoleon wrasses, which have been really fished out in most areas.