Greetings from the Philippines! 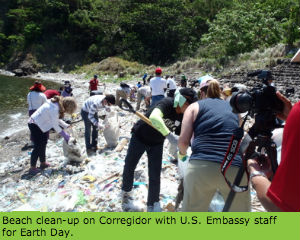 Reach down I stepped off the open-air bus wearing the pair of old Sambas I'd brought solely for this day, and looked down at a small stretch of beach on the island of Corregidor. It was early still, but the sun beat down a hard 95 degrees as we clambered down wearing our work gloves and long pants, trash bags in hand.

My first day as part of the Philippine Biodiversity/Verde Island Passage expedition involved joining Meg Burke (the Academy's Director of Teacher and Youth Education) and Katie Levedahl (Assistant Director) in the U.S. Embassy’s annual Earth Day beach clean-up. I gripped my large, black plastic bag and surveyed the area. Littered across the beach were hundreds of shoes, mostly flip-flops, some Crocs, a few sneakers, and the occasional dress heel. The vast majority of these shoes looked brand new; the time that had passed between their purchase and their arrival upon this shore was relatively short. Also worthy of mention is that these shoes were scattered atop a thick blanket of plastics.

Even after 125 full bags of trash had been packed up, the sandy bottom of the beach was still far from visible. I wanted to get some sort of idea of the scale we were dealing with; reaching down, I began filling my first bag with only flip-flops, which I was able to do while moving just a few feet away from my starting position. Within minutes, I was topping the bag off with the one-hundredth flip-flop. I looked up again. Where was this all going to end up? There is no recycling infrastructure. With sweat dripping from under my Giant’s cap, I looked around at the rest of the beach. People were picking up straws, plastic bags, wrappers, toys, and I thought about San Francisco’s new plastic-water-bottle ban. That wouldn’t even be helpful here, in a place were access to potable water itself is a challenge. 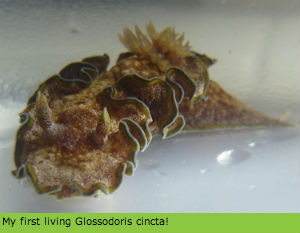 Reach forward The morning of my first research scuba dive, I asked the Academy’s Senior Curator of Invertebrate Zoology, Terry Gosliner, for advice on collecting nudibranchs. He responded, “Look really closely.” Turns out, he’s right. My first dive, I brought back big, colorful slugs; they were about as rare as pointing out poppies and eucalyptus in a biodiversity survey of Golden Gate Park. Within my small collection of large, common slugs, two tiny, mostly white slugs passed the test and were deemed interesting enough to bring back to the Academy.

I was elated. I quickly switched my strategy to finding the smallest slugs, which meant moving slowly, recognizing where to look, and developing my nudibranch eye. I spent hours the first few days collecting, sketching, and releasing all the common nudibranchs I could find to develop my identification skills, and learned quickly what we were looking for.

Reaching into the deep to discover new species was exhilarating. Sarah was the first to find a slug in the genus I study. Having only worked with museum specimens these past two years, this was the first time I was able to see a Glossodoris alive. Incredible doesn’t even describe it. After more dives with greater success in finding less common slugs, I finally heard the words I’d been waiting for: “This is new.” Remaining calm, I replied, “awesome,” while inside I felt like I'd hit the biodiversity jackpot. 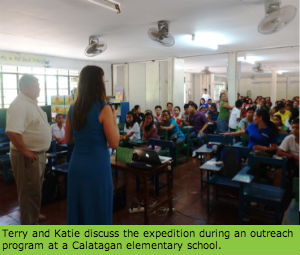 Reach out A week into our stay at Lago de Oro, I hopped into an "aircon" van with Terry, Meg, Katie, and Meg D. and drove out of the resort for the first time since arriving. We passed roadside shops with hand-painted signs advertising what was sold inside and the name of the owner. One of the things I love about the Philippines is how colorful everything is, and the local elementary school was no exception.

We walked across a sandy lot landscaped with low-hanging trees and into a room full of excited students and teachers. The classroom had been expanded to three times its normal size by pushing back dividers, like in the ballrooms of hotel conference centers.

The chair desks had been painted aqua green years ago, and the small stage featured a mural of a yellow-pink sunset with small frames containing their own maritime pictures painted on as if they were hanging on the wall themselves. As soon as we arrived, everyone rose for the national anthem, amplified by a microphone held up to a tiny recorder. It was beautiful. The energy inside the walls of this classroom with students from all over the county was nothing short of alive. After Meg and Terry’s outreach talks, the students lined up in one of the most organized, attentive, non-pushy lines I’ve ever seen. And slowly, with the littlest kids first, they came to see the creatures we'd brought from the reef in their own backyard. What never gets old? Watching kids light up when they see their first nudibranch. 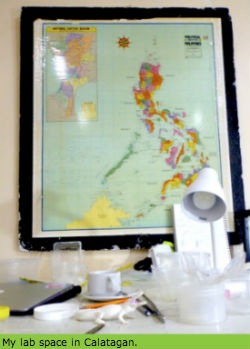 Reach up It was late into our last night in Calatagan after an exhausting day of packing the lab and cataloging all of our specimens. One by one, we all ended up in the pool under a cloudy night sky.

It was hard to tell whether the water or the air was warmer, and lightning lit up in the distance across the passage. Our group had shrunk considerably in the previous two weeks. Talk of logistics for tomorrow’s move to Lubang and reflections on this leg of the trip were interrupted by loud booms of thunder moving closer.

Amanda told us about an article she'd read stating that reaching your arms up above your head triggered a hormone release that raised confidence. So there we were, on our last night in Calatagan—standing in the swimming pool, hands raised over our heads, laughing as the rain poured down. 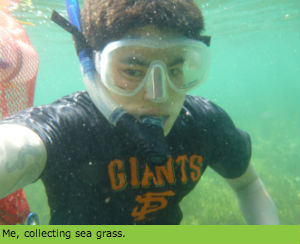 Reach in As the team loaded up the van to head to Lubang, I was preparing to embark on my own adventure. I handed off the expedition baton to my lab-mate, who'd flown in that morning to join in the last leg of the trip, and headed off to the beach to relax and reflect (this is in fact where I’m writing from now).

I learned a lot these past two weeks. Besides increasing my nudibranch vocabulary ten-fold, I figured out what I want to include in my field tool-kit on my next expedition, from the obvious—field microscope—to the less obvious, like spoons and droppers. I was also exposed to a lot of the ins-and-outs of the planning that goes into a trip of this caliber. Perhaps the best part was seeing the curators happier than I’ve ever seen them before—yup, this was the right career choice.

On a more personal note, I experienced (and made it through) what it was like to be on an expedition not only as a graduate student, but also as a man. The day of my departure for the expedition, I celebrated four months on testosterone. My department at the Academy has been on board with my transition from female to male, but I'd been incredibly nervous about the new scientists I would be working with—how I would be read, and how gender would play out in general in the Philippines. I can’t say it was a walk in the park, but I can say I had a lot of unexpected and wonderful conversations (along with a few hiccups), and that overall things continue to get easier. I feel incredibly lucky and privileged to be navigating these waters.