Not All Interesting Dives are Deep 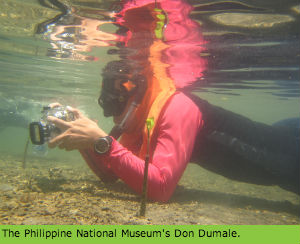 After making a couple of general collections on shallow reefs—and doing some targeted collecting of particular species for population level studies in Calatagan—the "Fish Team" spent two hours snorkeling in shallow water (1 to 3 feet deep), checking out seagrass beds and mangrove areas for potential collecting sites. Cameras are usually left behind on the collecting trips themselves, so an outing like this provides a perfect opportunity for taking photos—just as Don Dumale (Ichthyologist at the Philippine National Museum) is shown doing here.

In sandy patches there were an abundance of gobies (Cryptocentrus sp., see photo below) sharing burrows with Alpheid shrimp; the goby stands watch while the shrimp excavates and maintains the burrow. Banded sea snakes were also with us; these cobra relatives are quite venomous and curious, but thankfully, not aggressive. 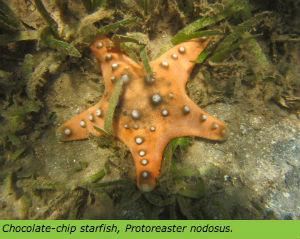 The very distinctive chocolate-chip starfish (Protoreaster nodosus) was present in the seagrass beds. There were also clusters of Diadema urchins with long needle-like spines that can easily pierce glove or wetsuit. Seeking refuge among the spines, much like an anemonefish does with its host’s tentacles, small scribbled rabbitfish (Siganus spinus) stayed safely out of reach.

Not all of the fishes and invertebrates are as easily seen. The bristle-tailed filefish (Acreichthys tomentosus) blends in beautifully with the seagrass; on sand in the photo below, you can see it more easily. The mangroves were shallower still—less than a foot deep in some places (and we weren’t even close to low tide). These areas in particular presented an unusual underwater landscape. To navigate the forest of vertical shoots, I used the well-worn foot trails that are exposed at low tide. 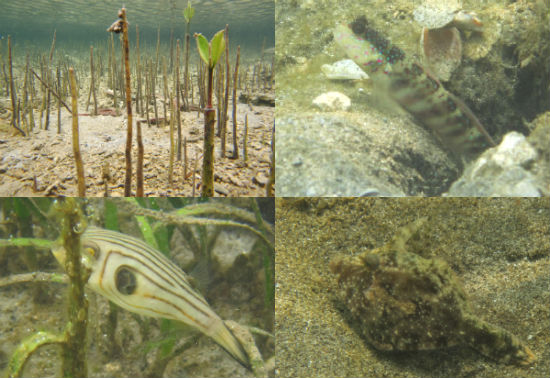 Clockwise from top left: A mangroves-eye view; a goby in its burrow; a bristle-tailed filefish; a striped puffer (Arothron manilensis).