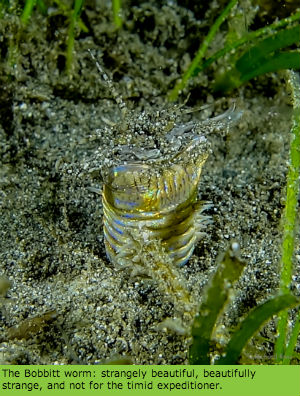 There are two Academy groups currently in the Philippines for the 2014 Biodiversity Expedition: one from Research, and the other from the Aquarium. Though we're staying at different locations, we collaborate when we can, like tonight.

It all started with a 90-minute night dive at Anilao Pier to try to collect a Bobbitt worm—a creature that lives in the sand, has jaws like a bear trap, and might be several meters long. It shoots up with lightning speed to catch fish and other animals, yanking them down into the muck like something out of a nightmare. In the 1990s, Academy Senior Curator Terry Gosliner named the Bobbitt worm after Lorena Bobbitt (and her legendary attack on her husband), and Academy crews have been trying to collect this animal both for display and for our preserved collection ever since. One look at the photo shows you why catching this animal isn’t easy, but take a look at this video for an even better demonstration.

Tonight's effort was unsuccessful, though I did get my hand on one of the worms—yes, my hand. My wife is less than thrilled about these attempts, but she understands that we have to do what we have to do for science. More efforts are planned, and hopefully there will be success. Hopefully. 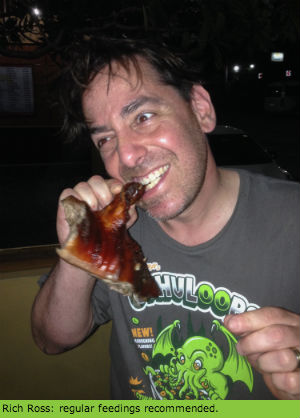 After the worm hunt, there was a party—a party that started without us. Apparently it began with a whole roast pig (enjoyed by both Research and Aquarium Staff), but by the time the worm hunters arrived, things had changed drastically. Let's just say that while there was still much fun to be had, there wasn't much pig.

Expeditions like this are an amazing amount of work, similar to running a triathlon. Instead of the events being swimming, running, and biking, the events are collection, processing, and animal care. The endurance needed to put out so much energy every single day is huge, but it's also incredibly fulfilling when everything's going well. Tonight's party was a short break from the draining but rewarding work of the expedition ... and the only picture I can find of the event is this one of me gnawing on a pig's head.