A Return to Devil's Point Pinnacle 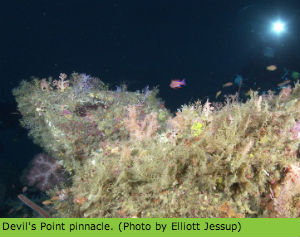 Yesterday we returned to the deep pinnacle off of Devil’s Point, with the intent of collecting live fish for the aquarium. I had my eye on a particularly colorful species from one of my favorite families of fish, the anthias.

Pseudanthias fasciatus, the one-stripe (or red-stripe) anthia, is found on deep reefs in harems of several dominant males and larger groups of females. The males are a gorgeous orange with pink and yellow highlights, and they have a thick, red stripe running down the length of their body. 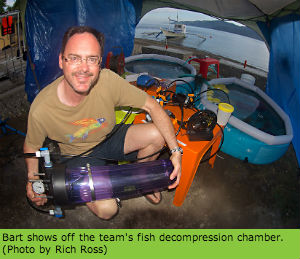 In order to get fish like this to the surface safely, Steinhart Aquarium biologists Matt Wandell and Richard Ross constructed a fish decompression chamber. The fish are sealed in the hard, plastic container, which prevents a rapid decrease in pressure as they're brought to the surface. Once on land, they're slowly "brought up" to surface pressure by decreasing the water pressure on the pump loop. 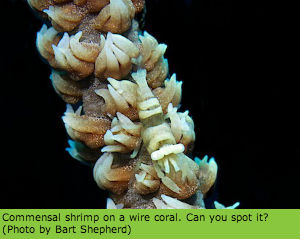 In a similar manner, in order to get the mesophotic divers to the surface safely, we must spend one to several hours making a long sequence of progressively shallower decompression stops. These stops, which can last from one minute to more than an hour, are a great opportunity to pause, get out the camera, and spend some time snapping photos of the amazing creatures that live in the center of marine biodiversity—like this one I took of a commensal shrimp living on a Stichopathes wire coral.