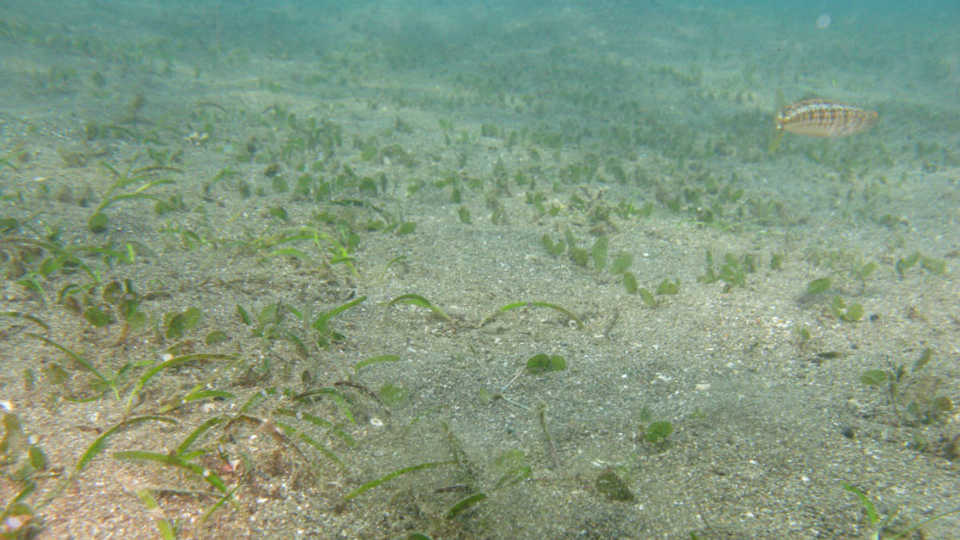 Most of the critters I’m working with during this expedition are so tiny that you need a microscope to examine them…sometimes even just to locate them!   There are lots of exceptions, however, and one of them involves a very cool critter called a chaetopterid worm that I encountered the other day. Since it was fairly big and impressive (colleagues actually stopped by to gawk at it in awe) and because these are such creepy-cool worms, I thought I’d share. 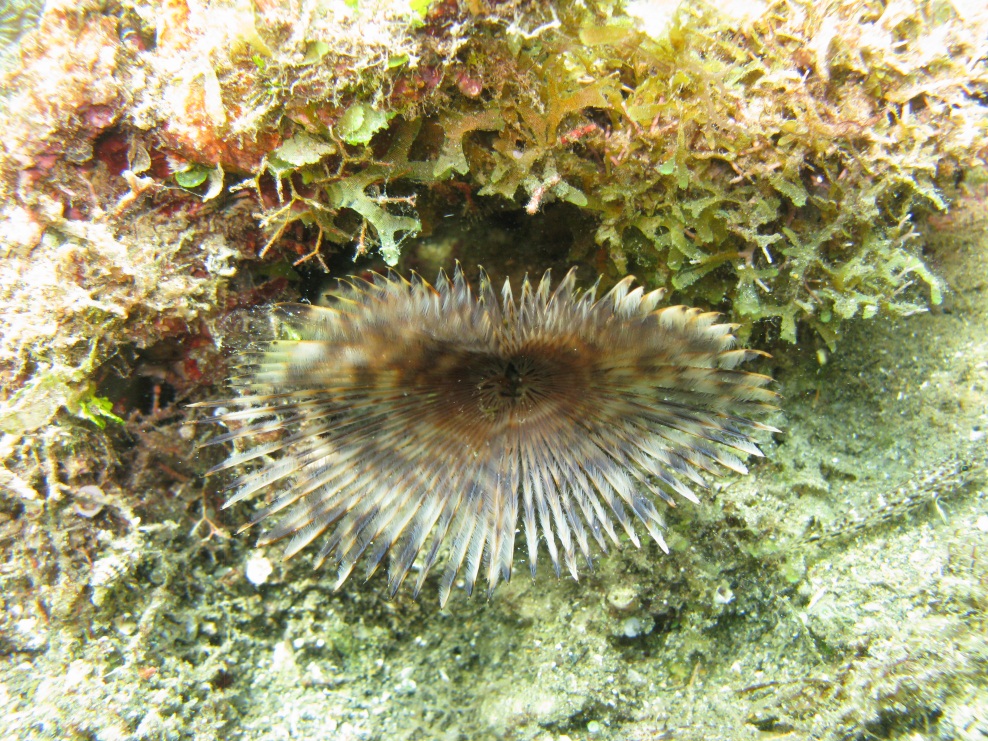 While working in a sandy seagrass area the other day, I dug up a large parchment (which is sand stuck together with mucus) tube about an inch in diameter that was sticking up out of the sandy sea bottom. Typically this type of tube houses a fanworm (a sabellid) with delicate fan-shaped radioles stretched into a sort of funnel-shaped plume.

In sabellid fanworms each radiole has tiny hair-like structures called cirri used to filter small particles of food from the water to be carried to the mouth. So considering the tube’s appearance, I was expecting a nice fat fanworm to emerge as I eagerly cut into my tube back at the lab, kind of like I was unwrapping some sort of creepy worm shaped gift.  This tube, however, was shaped more like a “U” buried under the sand and so I suspected that it might house something a bit different. And it did…a very large chaetopterid worm! 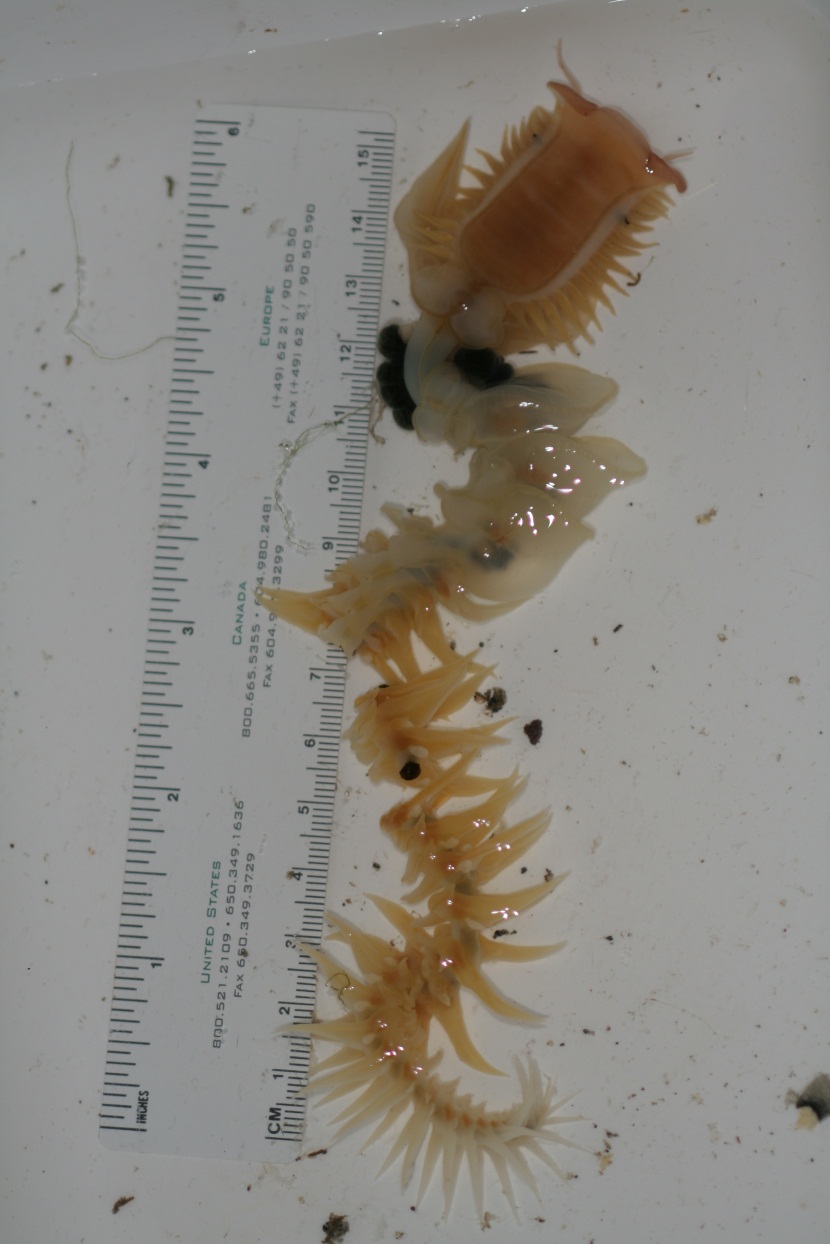 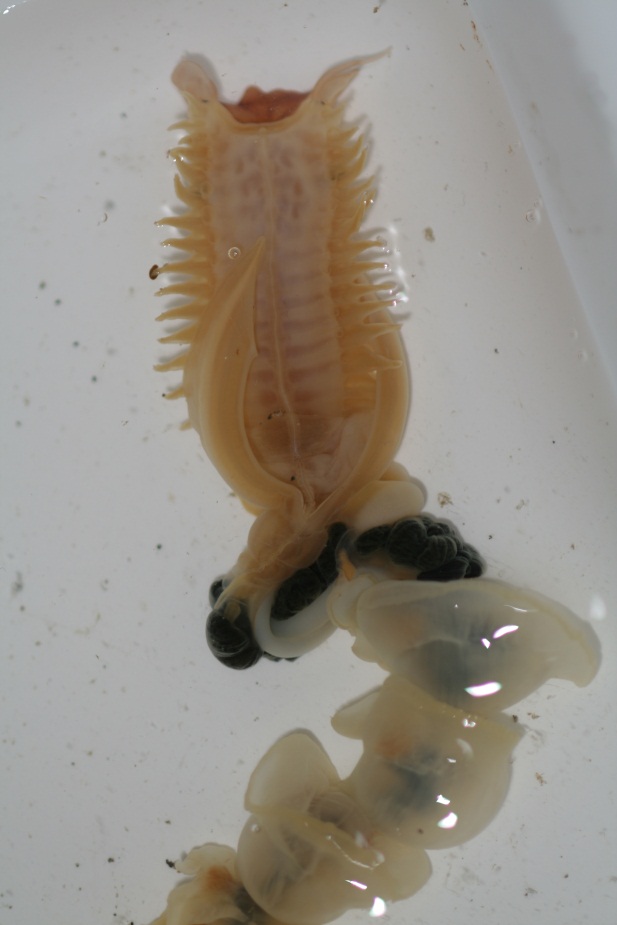 Chaetopterids are very specialized polychaetes (marine bristleworms) that live their lives confined in tubes. These worms have 3 distinct body regions: the head/anterior region is large and equipped with bristles and a set of palps used for sensory. The middle of the body is made up of the darkened gut and highly modified lobes that pump back and forth like big flaps to provide a steady water current used in feeding. The tail/posterior region is more “normal-worm-looking”, meaning long with foot appendages called parapodia carrying bristles on either side of the body. These worms feed using mucus nets which they string across the inside of their tubes to trap food particles by pumping water through their tubes to filter food onto the net. Once it’s full of food they eat the whole deal and then proceed to make a new net. Other critters, such as smaller worms and crabs, often live alongside chaetopterids in their tubes as commensal animals which score free food scraps and shelter while living there.

Another cool thing about these worms is that even though they live rather clandestine lives hidden in tubes, they produce bioluminescence (they emit light!). What in the world they are doing with this light-producing capability?  Well, we don’t know for certain.  Studies have shown that when a chaetopterid is disturbed, it shoots a wave of glowing particles from its tube.  One idea is that this light surge alerts prospective predators that “I don’t taste particularly good”, or maybe the light bursts are used to freak out and evict some of the free-loading critters out their tubes if it starts getting too crowded in there. Many polychaetes and other invertebrates emit light when disturbed, either for warning/predator avoidance or for communication with potential mates.   The yellow bands shown here on a nereid “pileworm” may be bioluminescent areas of the body used for signaling. 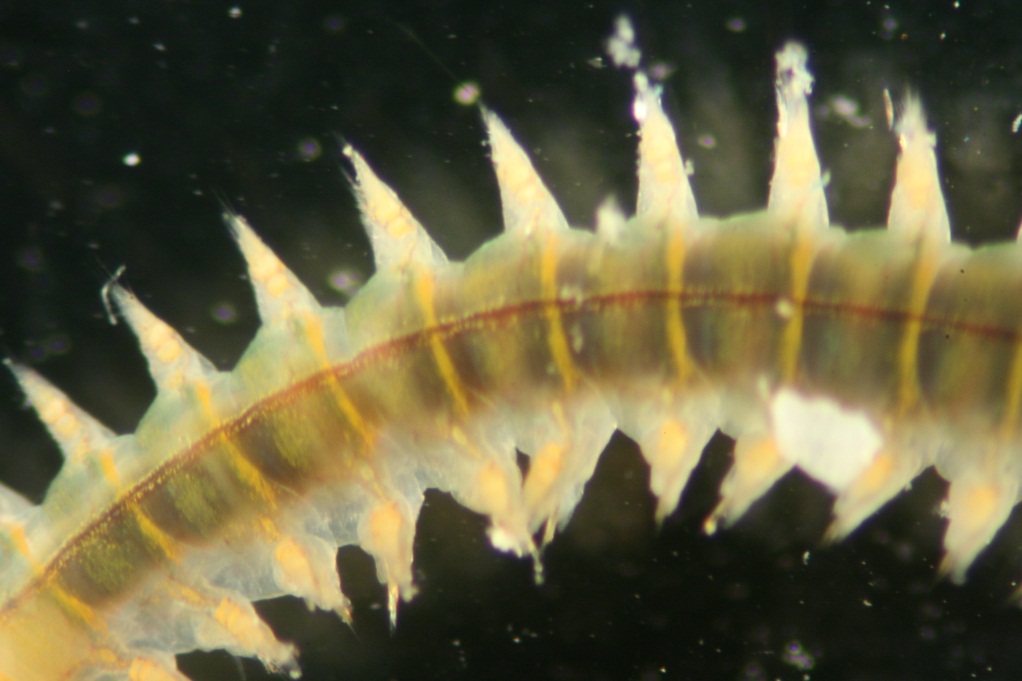 Polychaete worm behavior and physiology is as extremely diverse as their morphology. For such “sleeper” creatures that are unfamiliar to most regular folks, polychaete worms actually have a lot going on!