“All clear?” “All clear. Diver in!” Mati, our Filipino dive guide"confirms and I roll off the narrow V of the canoe hull of the wooden trimaran called Pangkas. Barely missing the bamboo outrigger I’m handed my video camera and dip down to avoid the biologists who follow. As the bubbles clear the scene beneath the boat opens, exposing one of the great wonders of the world, a coral reef so diverse in shape, and texture and color it is like staring at a canvas by Gauguin.  It is hard to determine which part to process and appreciate first, the colors or the brush strokes, the shadows or the subtleties. The bright tropical light paints shimmering stripes across the reef crest bringing into highlight the barrel sponges and large porites coral heads that project like sentinel towers.  Parrotfish, wrasses and damselfish provide a dynamic pulse against the backdrop.  It is breathtaking. The California Academy of Sciences Research team settles down and each expert scours the bottom for new nudibranchs, barnacles, octocorals and fish to study and describe.

Face down, each scientist enters their own world, processing and excluding all of the distractions and narrowing their focus down to their organisms of expertise.  Bob Van Syoc aka Barnacle Bob points at a tiny pock mark on the lace fan of a seafan.  An underwater thumbs up and a new species is trimmed away from the host.

So small they look like flaws in the garment of the lace, this barnacle may live only with this species of sea fan.  Dr. Terry Gossliner, our expedition leader has found nine new species of nudibranchs, a brightly colored marine snail.  Some of these shell-less marine snails are so small they are almost impossible to see among the soft corals and coral rubble. These people see things we don’t.

My job is the big picture. Through the viewfinder I try to convey the fragile and irreplaceable beauty of the ocean, and the threats that face it.  The angle is wide, the corals and fish and worms are all there, but so are the plastic and people and the human impacts on the reef.  Tim Horn and I have been working hard to shoot the wildlife and expedition for the Big Bang Gala video to be premiered at the California Academy of Sciences May 5.  Now we are onto shooting full dome vistas of this intriguing country of islands. Expeditions like this one are strenuous and incredibly fatiguing.  The planning alone is exhausting, encompassing an entire team who do not get to venture into the wild. We owe it to them and our Philippine colleagues to work every minute we are here. The shallow water team whom Im diving with is hitting the water 3-4 times per day, and spending the wee hours cataloging, describing and preserving the specimens. Well past midnight Tim and I are downloading images, performing a quick render and edit and staying up watching the high definition video crawl through the wire at a nudibranch’s pace back to the Academy for the final edit. For the Gala, our work is nearly complete and I'm excited to see the final cut of the video, and learn the audience’s response when they see it for the first time Thursday night. Until then, its back in the water. 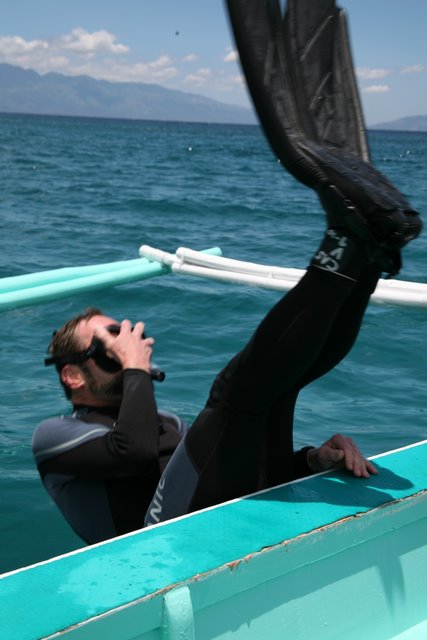