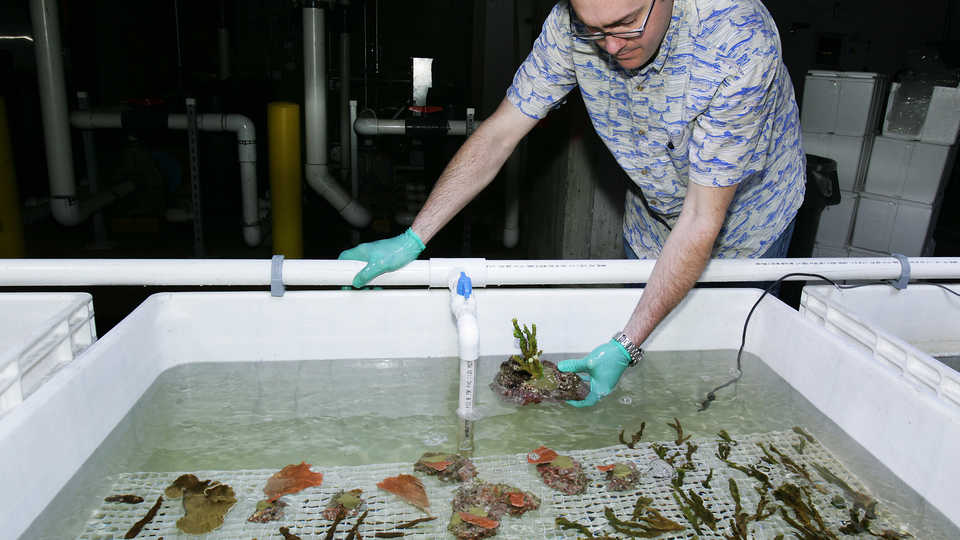 SAN FRANCISCO ( August 28, 2008 ) — A 212,000-gallon aquarium tank is ready for its debut in San Francisco's Golden Gate Park. The tank, which stands 25 feet tall in the middle of the new California Academy of Sciences, holds the world's deepest living coral reef display. When the Academy opens on September 27, 2008, visitors will be able to view the reef and its inhabitants from the surface as well as from five different underwater windows.

Often called rainforests of the sea, coral reefs are the most diverse aquatic ecosystems on the planet. They are also among the most endangered—up to 70% of the world's tropical coral reefs may disappear within the next 15 years due to the impacts of global warming and other environmental stresses. Worldwide, over 25% have already been destroyed or badly damaged. These ecosystems are important to save, not only because of the biodiversity they contain, but because they provide protection for coastal communities against tropical storms, hurricanes, and typhoons. Additionally, hundreds of millions of people depend on coral reefs for their livelihood or for food. Despite their global importance, most people on the planet have never seen a living reef. When the new California Academy of Sciences opens, over a million visitors a year will be able to experience the splendor of a living Philippine coral reef and learn what they can do to help save coral reefs around the world.

The Academy chose to feature a Philippine coral reef because the reef systems in the Philippines are among the most diverse in the world. The new tank will hold a variety of delicate soft and hard corals as well as sharks, rays, and more than 2,000 colorful reef fishes. All of the animals will be captive bred, or will come from sustainable wild sources, highlighting the importance of in-country research and conservation programs.

In preparation for the opening of the new exhibit, the Academy grew corals in its temporary facility at 875 Howard Street. In one tank, which measured 18 feet deep, Academy biologists grew corals on adjustable racks to determine which species grew best at different depths. This 20,000-gallon experimental tank held about 200 square feet of living corals, as well as several hundred reef fish. Additionally, the Academy installed 46 smaller tanks at Howard Street that were dedicated to the coral rearing program. These tanks, called "coral rearing pods," were actually agricultural bins that had been fitted out with life support systems. Each pod could hold 16 square feet of living corals.

Although they look like underwater plants, corals are actually animals that are related to anemones and jellyfish. Because these animals are able to reproduce asexually, biologists can grow new corals by breaking off pieces of an existing coral colony and affixing them to new pieces of rock. Academy biologists use a variety of creative tools to encourage corals to attach themselves to new substrates, including superglue, rubber bands, toothpicks, epoxy putty, and fishing line. The coral rearing pods at Howard Street were "planted" with small pieces of coral that had been broken off from larger colonies.

It is a challenge to grow corals at depths greater than six feet, since it is difficult to replicate the energy from a tropical sun. In the new Academy, the ceiling above the new Philippine coral reef tank is studded with skylights, to allow the maximum amount of daylight to reach the reef below. To supplement that natural light, the Academy installed 120 metal halide lamps, which simulate the intensity and spectrum of natural sunlight. These powerful lights were originally designed to flood football stadiums with light. The new tank also employs powerful filtration systems to accommodate the high level of biomass it contains. All 212,000 gallons of water in the tank are filtered once every 45 minutes. Additionally, a water jet system simulates wave action and stimulates the corals.

When the spectacular new exhibit opens, it will incorporate interactive displays and regular in-tank diver presentations. To support its dive programs, the new Academy is recruiting over 100 volunteer divers to help maintain the large exhibits, feed the animals, and interact with the public. Academy scientists will also use the tank as a resource for their scientific studies.

About the New California Academy of Sciences

Designed by Pritzker prize-winning architect Renzo Piano with local partner Stantec Architecture (formerly Chong Partners Architecture), the new California Academy of Sciences will combine inspiring architecture with inventive exhibits to provide eye-opening interactions with the natural world for its visitors. Topped with a living planted roof, the new building will also integrate the Academy more sensitively into its natural environment in Golden Gate Park. The new facility will employ energy-efficient, environmentally-sensitive building strategies to help set a standard for sustainable architecture in civic buildings. In 2005, it received the silver Holcim Award for sustainable construction in North America. The estimated total cost of the project is $488 million, including building, exhibition, relocation and interim operation costs.