A series of four scientific papers shows evidence of an expanding variety of plant foods, written into the enamel of fossil teeth 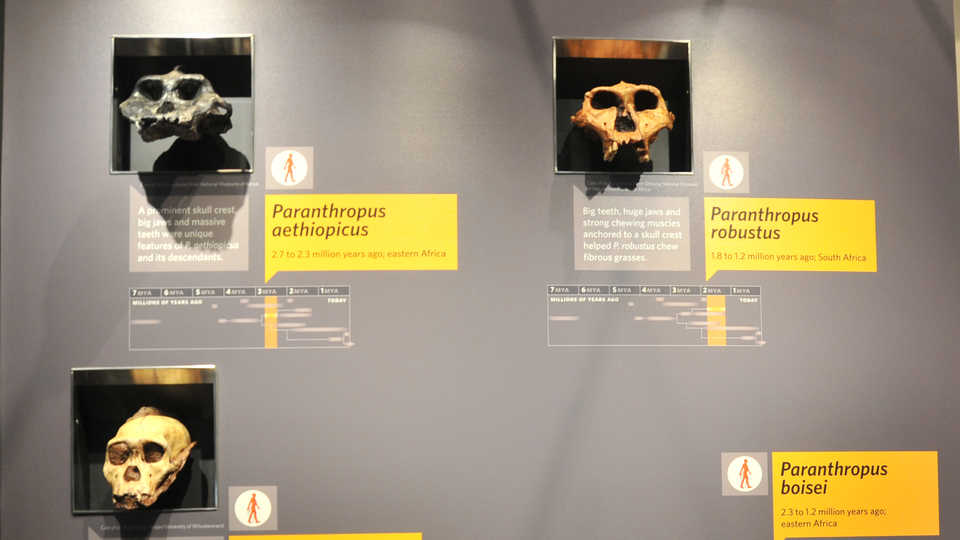 SAN FRANCISCO (June 3, 2013) — The old saying "You are what you eat" takes on new significance in the most comprehensive analysis to date of early human teeth from Africa. Prior to about 3.5 million years ago, early humans dined almost exclusively on leaves and fruits from trees, shrubs, and herbs—similar to modern-day gorillas and chimpanzees. However, about 3.5 million years ago, early human species like Australopithecus afarensis and Kenyanthropus platyops began to also nosh on grasses, sedges, and succulents—or on animals that ate those plants. Evidence of this significant dietary expansion is written in the chemical make-up of our ancestors' teeth. These findings are reported in a series of four papers published this week in the Proceedings of the National Academy of Sciences, by an international group of scientists spread over three continents.

"These papers present the most exhaustive isotope-based studies on early human diets to date," said Dr. Zeresenay Alemseged, Senior Curator and Chair of Anthropology at the California Academy of Sciences, and co-author on two of the papers. "Because feeding is the most important factor determining an organism's physiology, behavior, and its interaction with the environment, these finds will give us new insight into the evolutionary mechanisms that shaped our evolution."

Plants can be divided into three categories based on their method of photosynthesis: C3, C4, and CAM. C3 plants (trees, shrubs, and herbs) can be chemically distinguished from C4/CAM plants (grasses, sedges, and succulents) because the latter incorporate higher amounts of the heavier isotope carbon-13 into their tissues. When the plants are consumed, the isotopes become incorporated into the animal's own tissues—including the enamel of developing teeth. Even after millions of years, scientists can measure the relative amounts of carbon-13 in teeth enamel and infer the amount of C3 vs. C4/CAM plants in an animal's diet.

"What we have is chemical information on what our ancestors ate, which in simpler terms is like a piece of food item stuck between their teeth and preserved for millions of years," said Alemseged.

These papers represent the first time that scientists have analyzed carbon isotope data from all early human species for which significant samples exist: 175 specimens representing 11 species, ranging from 4.4 to 1.3 million years in age. The results show that prior to 3.5 million years ago, early humans ate almost exclusively C3 plants. But starting about 3.5 million years ago, early humans acquired the taste for C4/CAM plants as well, even though their environments seemed to be broadly similar to their ancestors'. The later genus Homo, including modern-day Homo sapiens, continues the trend of eating a mixture of C3 and C4/CAM plants—in fact, people who enjoy mashed potatoes with corn are practicing a 3.5 million-year-old habit.

What the studies cannot reveal is the exact identity of the food, and whether it also included animals that ate C4/CAM plants (an equally valid way to acquire carbon-13). Possible C4/CAM-derived meals include grass seeds and roots, sedge underground stems, termites, succulents, or even small game and scavenged carcasses. In 2010, Alemseged and his research team published the earliest evidence for meat consumption using tools, dating back to 3.4 million years ago—an additional line of evidence showing a dietary shift in human evolution.

"The change in isotopic signal documented by the new studies, coupled with the evidence for meat-eating in Australopithecus afarensis from Dikika around 3.5 million years ago, suggests an expansion in the dietary adaptation of the species," said Alemseged.

The authors of this week's papers also sampled fossils of giraffes, horses, and monkeys from the same environments and saw no significant change in their carbon isotope values over time—suggesting that the unique dietary transformation of early humans did not apply to other mammals on the African savanna. The question of what drove the transformation, however, remains unresolved.

The Institute for Biodiversity Science and Sustainability at the California Academy of Sciences is at the forefront of efforts to understand two of the most important topics of our time: the nature and future of life on Earth. Based in San Francisco, the institute is home to more than 60 research scientists and aquarium biologists, as well as more than 28 million scientific specimens from around the world—nearly 40,000 of which are alive and on display in the Academy's Steinhart Aquarium. The institute also leverages the expertise and efforts of more than 100 international Research and Field Associates and 300 distinguished Fellows. Through expeditions around the globe, captive breeding programs, and investigations in the lab, the institute's scientists strive to understand the evolution and interconnectedness of life. Through these same efforts, as well as through partnerships, community outreach, and public engagement initiatives, the institute aims to guide critical conservation decisions and address the challenge of sustainability.