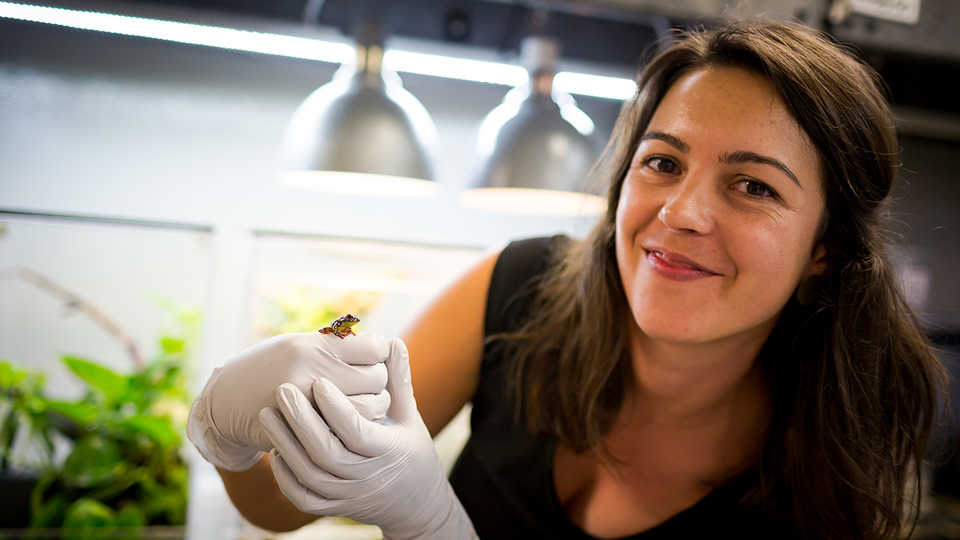 SAN FRANCISCO (January 27, 2020) — The California Academy of Sciences is pleased to announce the appointment of Rayna Bell, PhD, as its newest Patterson Scholar and assistant curator of herpetology. In her new role, Bell continues her research about the evolution, ecology, and mysterious visual systems of tropical frogs. In addition to her research, Bell is continuing her work in public engagement and science education by leading multidisciplinary trips to the Gulf of Guinea islands off the western coast of Africa, and establishing a new long-term amphibian and reptile monitoring site in California. By empowering students and community scientists—both at home in California and abroad—Bell hopes to share the inherent wonder in the scientific process of research and discovery. The public can hear more about her work in a fascinating, free talk on Wednesday, February 26, 2020.

“We’re thrilled to welcome Rayna to the Academy as our new herpetology leader,” says Shannon Bennett, PhD and Academy Chief of Science. “Her work has deep Academy roots—Rayna has been visiting and advancing our world-leading museum collections in herpetology for years. Her research on frogs is bold and innovative, addressing important questions in their biology and conservation.”

Bennett, a longtime microbiologist with a passion for public outreach, calls Bell, “a wonderful spokesperson for amphibians and their charm for people of all walks of life. We are so excited to welcome a scientist of her caliber who is committed to our core values of conducting original research while also advancing a healthier planet through conservation and inspiration.”

Early inspiration at the Academy
Growing up on the edge of Mt. Tam in Marin County, Bell cherished her annual school field trips to the Academy, letting her imagination run wild in African Hall among the dioramas of impalas, cheetahs, and zebras. While studying Integrative Biology at UC Berkeley, she took a student research position at its Museum of Vertebrate Zoology and was introduced to Emeritus Academy Curator of Herpetology, Bob Drewes.

“Within 10 minutes, he invited me on expedition to São Tomé!” recalls Bell. While she had to decline that initial invitation, she did incorporate the Academy’s extensive São Tomé collections into her research while pursuing her doctorate in Ecology and Evolutionary Biology at Cornell University, and has since visited the islands several times with Drewes and other interdisciplinary colleagues. In her new Academy role, Bell plans to helm future expeditions focused on local collaboration and exploration.

The highlights of low light
“Most frog biologists do everything in the dark,” says Bell. This is more of a necessity than a preference, thanks to the nocturnal dispositions of the amphibians she studies. Whether she’s plunging into a rainforest in West-Central Africa guided by headlamp or examining frog retinas in the darkness of her lab, Bell is undeterred by lack of light—which can lead to some illuminating observations.

“It changes the way you look at things when you're walking through the dense rainforest and can only see a meter or two in front of you; you notice tiny creatures and cool-looking plants and fungi you might miss during the day,” Bell says. “I’ve seen bioluminescent fungi ‘by accident’ because I had to turn my light off and wait for a frog to start calling again—and in the darkness I saw the forest floor was glowing. It was pretty magical.”

Chasing answers and fighting frog extinction
Nine graduate research trips to West-Central Africa moved the needle on Bell’s career-making search into the evolutionary mysteries of frogs. When it comes to this group of amphibians, there are far more questions than answers—a gap in knowledge Bell views as a worthy challenge.

“What’s really exciting for me is how much we don’t know about amphibians, from courtship behavior, parental care, and reproductive strategies, to understanding how they see color,” says Bell. While chytridiomycota, the deadly fungi commonly known as chytrid, wipes out global frog populations and dominates amphibian headlines, Bell champions a broad perspective on what it takes to impact survival.

“I really believe,” says Bell, “that continuing basic research into frog biology, evolution, and distributions—not to mention discovering new species—should also be central to the global fight against amphibian extinction.”

Ground zero for Bell’s research is an ancient archipelago off Central Africa’s Atlantic coast. The Gulf of Guinea islands, consisting of the nation of São Tomé and Príncipe and Equatorial Guinea’s Bioko and Annobón Islands, are living laboratories of species diversity and endemism (species unique to a specific region or habitat and found nowhere else on Earth), and are the perfect ecosystems in which to find answers to fundamental frog evolution and conservation questions.

Research globally, sequence locally
While the scope of her research spans continents, Bell is thrilled with her Bay Area homebase. “The Academy is so unique because it blends field and specimen-based research with the latest genomic and imaging techniques. It’s also exciting to be at a place where our data is easily accessible to the larger research community and where researchers can share their latest results with museum visitors.”

Bell’s spirit of inclusion extends to the field as well: She often invites local residents living near her research sites to join her as research assistants, and is honored to help cultivate the next generation of amphibian ambassadors. Bob Drewes, her mentor who didn’t hesitate to invite her on an expedition 10 minutes after their first meeting, certainly approves.

What species would you love to see on exhibit?
Bell: “The African hairy frog. The males have this bizarre fringe made of skin that looks kind of like hair, and its function is still a mystery. They also have retractable claws that are so sharp that once a large adult male tore through a bag I had placed him in!”

What’s your favorite frog call?
Bell: “The desert rain frog makes the cutest squeaking noise, but it’s worth mentioning that frogs aren’t the only amphibian to vocalize: The Pacific giant salamander barks.”

Any words of advice for future scientists?
Bell: “‘Remember: This is supposed to be fun!’ That’s what my undergraduate advisor Craig Moritz told me one time when I was having a rough day in the lab. Whenever I feel like those words don't ring true, I try to take a step back and identify what is bumming me out so I can figure out what I need to do differently so I can enjoy what I’m doing.”