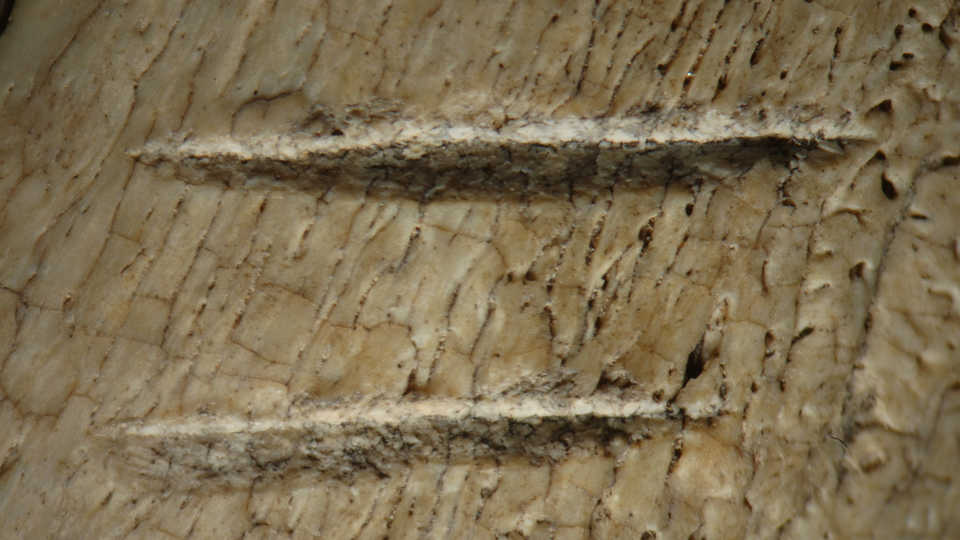 ADDIS ABABA (August 11, 2010) — The evolutionary stories of the Swiss Army Knife and the Big Mac just got a lot longer. An international team of scientists led by Dr. Zeresenay Alemseged from the California Academy of Sciences has discovered evidence that human ancestors were using stone tools and consuming meat from large mammals nearly a million years earlier than previously documented. While working in the Afar Region of Ethiopia, Alemseged’s “Dikika Research Project” team found fossilized bones bearing unambiguous evidence of stone tool use—cut marks inflicted while carving meat off the bone and percussion marks created while breaking the bones open to extract marrow. The bones date to roughly 3.4 million years ago and provide the first evidence that Lucy’s species, Australopithecus afarensis, used stone tools and consumed meat. The research is reported in the August 12 issue of the journal Nature.

“This discovery dramatically shifts the known timeframe of a game-changing behavior for our ancestors,” says Alemseged, Curator of Anthropology at the California Academy of Sciences. “Tool use fundamentally altered the way our early ancestors interacted with nature, allowing them to eat new types of food and exploit new territories. It also led to tool making—a critical step in our evolutionary path that eventually enabled such advanced technologies as airplanes, MRI machines, and iPhones.”

Although the butchered bones may not look like particularly noteworthy fossils to the lay person, Alemseged can hardly contain his excitement when he describes them. “This find will definitely force us to revise our text books on human evolution, since it pushes the evidence for tool use and meat eating in our family back by nearly a million years,” he explains. “These developments had a huge impact on the story of humanity.”

Until now, the oldest known evidence of butchering with stone tools came from Bouri, Ethiopia, where several cut-marked bones were dated to about 2.5 million years ago. The oldest known stone tools, dated to around the same time, were found at nearby Gona, Ethiopia. Although no hominin fossils were found in direct association with the Gona tools or the Bouri bones, an upper jaw from an early Homo species dated to about 2.4 million years ago was found at nearby Hadar, and most paleoanthropologists believe the tools were made and used only by members of the genus Homo.

The new stone-tool-marked fossil animal bones from Dikika have been dated to approximately 3.4 million years ago and were found just 200 meters away from the site where Alemseged’s team discovered “Selam” in 2000. Dubbed “Lucy’s Daughter” by the international press, Selam was a young Australopithecus afarensis girl who lived about 3.3 million years ago and represents the most complete skeleton of a human ancestor discovered to date. "

After a decade of studying Selam’s remains and searching for additional clues about her life, we can now add a significant new detail to her story,” Alemseged notes. “In light of these new finds, it is very likely that Selam carried stone flakes and helped members of her family as they butchered animal remains.”

The location and age of the butchered bones from Dikika clearly indicate that a member of the A. afarensis species inflicted the cut marks, since no other hominin lived in this part of Africa at this time. These fossils provide the first direct evidence that this species, which includes such famous individuals as Lucy and Selam, used stone tools.

“Now, when we imagine Lucy walking around the east African landscape looking for food, we can for the first time imagine her with a stone tool in hand and looking for meat,” says Dr. Shannon McPherron, archeologist with the Dikika Research Project and research scientist at the Max Planck Institute for Evolutionary Anthropology in Leipzig. “With stone tools in hand to quickly pull off flesh and break open bones, animal carcasses would have become a more attractive source of food. This type of behavior sent us down a path that later would lead to two of the defining features of our species—carnivory and tool manufacture and use.”

To determine the age of the butchered bones, project geologist Dr. Jonathan Wynn relied on a very well documented and dated set of volcanic deposits in the Dikika area. These same deposits were previously used to determine Selam’s age, and they are well known from nearby Hadar, where Lucy was found. The cut-marked bones at Dikika were sandwiched between volcanic deposits that have been securely dated to 3. 24 and 3.42 million years ago, and they were located much closer to the older sediment. “We can very securely say that the bones were marked by stone tools between 3.42 and 3.24 million years ago, and that within this range, the date is most likely 3.4 million years ago,” says Wynn, a geologist at the University of South Florida.

Both of the cut-marked bones discovered at Dikika came from mammals—one is a rib fragment from a cow-sized mammal, and the other is a femur shaft fragment from a goat-sized mammal. Both bones are marred by cut, scrape, and percussion marks. Microscope and elemental analysis using secondary electron imaging and energy dispersive x-ray spectrometry demonstrated that these marks were created before the bones fossilized, meaning that recent damage can be eliminated as the cause of the marks. Additionally, the marks were consistent with the morphology of stone-inflicted cuts rather than tooth-inflicted marks. Dr. Hamdallah Bearat from the Ira A. Fulton Schools of Engineering at Arizona State University determined that one cut-mark even contained a tiny, embedded piece of rock that was likely left behind during the butchering process.

“Most of the marks have features that indicate without doubt that they were inflicted by stone tools,” explains Dr. Curtis Marean from the Institute of Human Origins at Arizona State University, who helped with the mark identifications. “The range of actions that created the marks includes cutting and scraping for the removal of flesh, and percussion on the femur for breaking it to access marrow.”

While it is clear that the Australopithecines at Dikika were using sharp-edged stones to carve meat from bones, it is impossible to tell from the marks alone whether they were making their tools or simply finding and using naturally sharp rocks. So far, the research team has not found any flaked stone tools at Dikika from this early time period. This could indicate that the Dikika residents were simply opportunistic about finding and using sharp-edged stones. However, the sedimentary environment at the site suggests another potential explanation.

“For the most part, the only stones we see coming from these ancient sediments at Dikika are pebbles too small for making tools,” says McPherron. “The hominins at this site probably carried their stone tools with them from better raw material sources elsewhere. One of our goals is to go back and see if we can find these locations, and look for evidence that at this early date they were actually making, not just using, stone tools.”

Regardless of whether or not Selam and her relatives were making their own tools, the fact that they were using them to access nutritious meat and marrow from large mammals would have had wide-ranging implications for A. afarensis both physically and behaviorally.

“We now have a greater understanding of the selective forces that were responsible for shaping the early phases of human history,” says Alemseged. “Once our ancestors started using stone tools to help them scavenge from large carcasses, they opened themselves up to risky competition with other carnivores, which would likely have required them to engage in an unprecedented level of teamwork.”

While many questions remain about the history of tool use, tool making, and related dietary changes among human ancestors, this discovery adds a rich new chapter to the story—a story that is deeply relevant to what makes us unique as a species.

This research was conducted under the auspices of the Ethiopian Authority for Research and Conservation of Cultural Heritage / Ministry of Culture and Tourism. Financial support for the 2009 field and laboratory work was provided by the California Academy of Sciences. Travel expenses for D.G., S.P.M., D.N.R. and J.G.W. were covered by their respective institutions.

About the Dikika Research Project

The Dikika Research Project was founded in 1999 by Ethiopian paleoanthropologist Zeresenay Alemseged, chair of the Anthropology Department at the California Academy of Sciences. Over the past 12 years, Alemseged has conducted annual field seasons at Dikika with an international team of researchers specializing in paleoanthropology, paleontology, geology, and archaeology. This group of researchers is endeavoring to unravel critical questions in human evolution pertaining to hominin biological and behavioral transformation across time and space, as well as the paleoenvironmental and paleoecological dynamics responsible for shaping the trajectory of our species. In 2006, the team published an article in Nature about the oldest and most complete juvenile skeleton of A. afarensis, known as “Selam.”

The Institute for Biodiversity Science and Sustainability at the California Academy of Sciences is at the forefront of efforts to understand two of the most important topics of our time: the nature and future of life on Earth. Based in San Francisco, the institute is home to more than 60 research scientists and aquarium biologists, as well as 45.6 million scientific specimens from around the world—nearly 40,000 of which are alive and on display in the Academy’s Steinhart Aquarium. The institute also leverages the expertise and efforts of more than 100 international Research and Field Associates and 300 distinguished Fellows. Through expeditions around the globe, captive breeding programs, and investigations in the lab, the institute’s scientists strive to understand the evolution and interconnectedness of life. Through these same efforts, as well as through partnerships, community outreach, and public engagement initiatives, the institute aims to guide critical conservation decisions and address the challenge of sustainability.