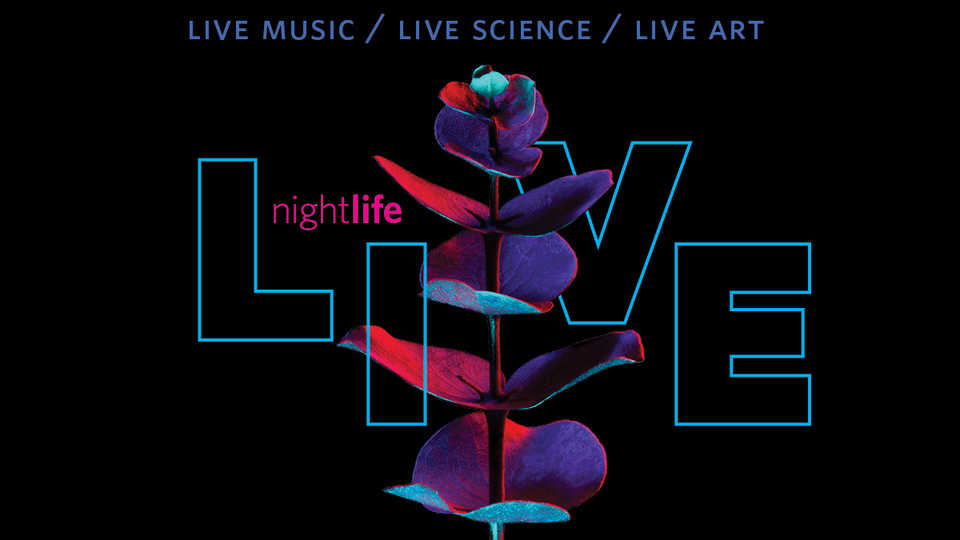 SAN FRANCISCO (June 3, 2019)–NightLife at the California Academy of Sciences, the museum’s weekly Thursday night party for science-curious adults 21+, has just announced the lineup for its sixth annual NightLife LIVE summer concert series starting this July. NightLife LIVE pairs emerging bands and musicians with cutting-edge visual artists in an immersive intersection of music, art, and science. This summer’s headliners include Men I Trust with mk.gee (July 11), The Marías with Amo Amo (August 8), Duckwrth with G.L.A.M (September 12), and Nick Hakim with Kadhja Bonet (October 10.) NightLife LIVE is co-presented by Noise Pop and in partnership with Outside Lands Music Festival, DoTheBay, and Deep Eddy Vodka.

This year, NightLife LIVE is excited to announce its first artist-in-residency featuring Los Angeles-based artist Maggie West. West, whose work has been featured in publications including Paper, iD, Dazed and Confused, Playboy, Artnet, Newsweek, Forbes, Complex, and Out, specializes in surreal, colorful photography and installations. A curated selection of West’s eye-catching images, many featuring specimens from the Academy’s scientific collections, will be displayed within a 7’x11’ wide geodesic dome installation, illuminated from within, casting a vibrant, colorful glow across the museum’s West Garden. The installation will debut at the Academy’s July 11 NightLife LIVE event.

With immersive exhibits that transport NightLife partygoers to the depths of a Philippine coral reef and the canopy of a lush, four-story rainforest, visitors can stimulate all of their senses as the museum stays open after dark to transform into one of San Francisco’s most unique music venues in the heart of Golden Gate Park. Partnering with some of the Bay Area’s most buzzworthy art collectives and studios, NightLife LIVE will feature immersive light shows and mind-bending projections by ALL OF IT NOW, VR experiences by Vision Quest, and more. Each NightLife LIVE event will also feature hands-on, science-inspired crafts and creativity workshops with Paint Pens Collective, rotating pop-up shops from local vendors like Amoeba Records, and special “one-night-only” custom designs with screen printing by San Franpsycho.

Want to hear all NightLife LIVE featured artists in one place? Check out the all-new series playlist and get show-ready! See below for the full 2019 NightLife LIVE line up, additional DJ details to be announced soon.

July 11 MEN I TRUST with mk.gee

NightLife LIVE, our summer music series, kicks off on the Academy’s outdoor stage with a night of laid-back groovy indie pop. Fresh off their Coachella debut, Montreal trio Men I Trust headlines, featuring dream-pop perfect vocals by Emma Proulx and a funky and “insatiable groove” (Ones to Watch). Multi-instrumentalist, singer-songwriter, and California transplant mk.gee (pronounced McGee) opens, bringing his standout funk-inspired indie rock. He also carries a stamp of approval by Frank Ocean, who featured a mk.gee track on his blonded RADIO show last December.

THE MARÍAS with Amo Amo

In partnership with Outside Lands Music Festival

NightLife LIVE rolls on with a night of psychedelic groove from Los Angeles bands The Marías and Amo Amo. Headliners The Marías are the “psychedelic-soul lovechild” of LA native Josh Conway and Puerto Rican-bred, Atlanta-raised María, a smooth fusion of jazz percussion, hypnotic guitar riffs, and smoky vocals. Amo Amo glides into the Academy on a chill sonic wave of soulful jams and ‘70s-inspired soft-rock tunes, having recently released their self-titled debut album, produced by My Morning Jacket’s Jim James.

The series continues with an energetic set by buzzy South Central LA rapper Duckwrth, coming off the release of his new EP, Falling Man, and a track on the Spider-Man: Into the Spider-Verse soundtrack. As “LA’s newest, and arguably soon to be best export” (Paper Mag), the rapper mixes hip hop, funk, and rock for an exciting, unique sound. Oakland-born MC/producer G.L.A.M (“Good Lyrics and Music”) opens with fiery lyrics and her take on ‘90s-influencer hip hop.

NightLife LIVE closes out the San Francisco summer with a headlining set by Brooklyn musician Nick Hakim, whose experimental soul music has the sonic luster to transport you to another world. His 2017 debut album, Green Twins, features soaring, rich arrangements inspired by classic soul albums, but spun into something modern with tings of psychedelia. Opening the night, the “inventive, inspiringly devious” (NPR) Kadhja Bonet infuses her experimental and idiosyncratic mix of soul, jazz, and folk with a rich, ethereal soprano.