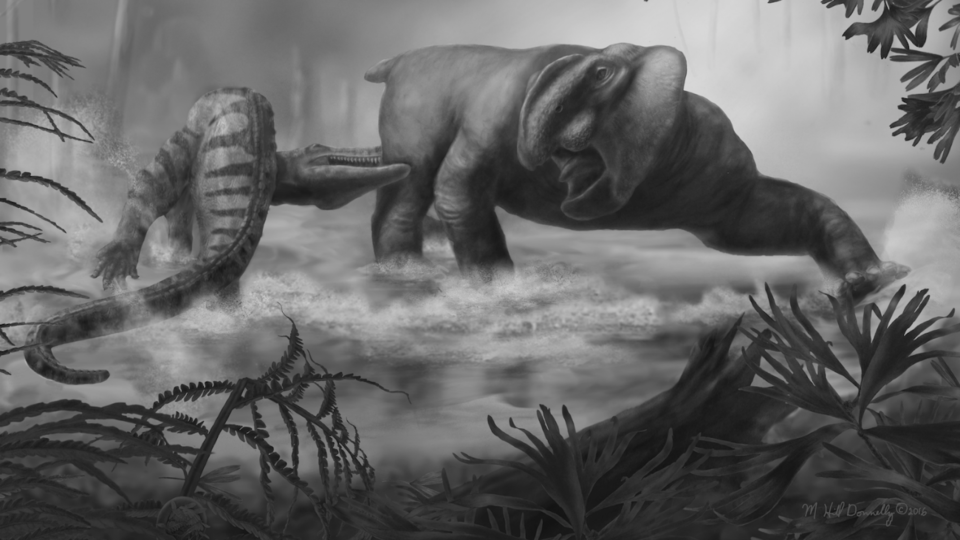 SAN FRANCISCO (November 28, 2018) – In an era of rapid ecological change, scientists are turning to historical periods of persistence to better understand what drives stability. A team from the California Academy of Sciences and the Field Museum of Natural History has examined the structural complexity of ancient ecosystems by looking at the number of species and how they’re organized by function, such as top predators or decomposers. All stable ecosystems have species grouped by function, and the study found that these functional groupings are more important to an ecosystem’s stability than the sheer number of species present. Surprisingly, the study also found that among simulated systems of equal but different complexity, those representing actual ancient ecosystems tended to be more stable. The team is now investigating why certain functional compositions are better than others and how those structures arise over time. Understanding the organization of stable ecosystems of the past allows scientists to better predict whether modern human impacts have pushed our current planetary system past a point of recovering to its original state.

To run their analysis, the team studied a large mass extinction event that took place 252 million years ago and its impacts on ancient South African ecosystems. Their findings, published this week in the journal Earth-Science Reviews, present one of the strongest arguments to date for saving systems of species rather than individuals in the modern day.

“In examining the communities before and after this mass extinction event, we found that the longest-lasting systems were not distinguished by any obvious features, except for having longer evolutionary histories,” says Dr. Peter Roopnarine, lead author and Academy Curator of Geology. “The functional structures that arose over time in those systems allowed species to have lower probabilities of extinction, and to coexist more stably, under varying ecological conditions. The opposite was true of several communities that arose quickly after the mass extinction, although those communities were also rich in species.”

The team then modeled millions of alternate structures in search of other ways an ecosystem could support strong species coexistence, but very few structures proved superior to the stable systems they’d identified in the fossil record. The team’s alternate functional arrangements all varied; some organized the species into different functions, others changed the way those species interacted, and some even altered the flow of energy between species.

“It’s unlikely these successes arose purely by chance,” says Roopnarine. “This tells us there’s a strong imprint on history—a clear repetition—of how ecosystems are built over geological and evolutionary time. We don’t know why the stable communities pre-extinction and post-recovery were so much better than our modeled alternatives, but evolution clearly favored them and their functional organization. Figuring out why stable communities emerge over time is one of the next big questions.”

Step into the Karoo

The team chose the Karoo Basin in South Africa for the study due to the region’s unparalleled fossil record. The study analysis begins about 254 million years ago, when Africa, Antarctica, and South America surrounded the Karoo in the supercontinent known as Gondwana. Ancient relatives of mammals dominated the then-forested landscape.The Karoo had reached its highest level of species diversity when climate change hit.

“Around 252 million years ago, huge volcanic eruptions occurred in what is now Siberia,” says Dr. Kenneth Angielczyk, Associate Curator of Paleomammalogy at the Field Museum of Natural History. “In the process of these eruptions, magma burned through coal deposits in the surrounding rocks, releasing greenhouse gasses like carbon dioxide. Additional greenhouse gasses were released by the erupting lava, and together these processes began to alter global climate. It was essentially a massive burning of fossil fuels, with parallels to what we’re seeing today, but over tens of millennia.”

Several waves of extinction followed, reducing the Karoo ecosystem to a fraction of what it was. Eventually, a rebound in diversity formed a new ecosystem that included survivors of the extinction plus species that had migrated in from surrounding areas. Despite the uptick in species numbers, the system was geologically short-lived. As the recovery proceeded over the next several million years, a system emerged that had a familiar feature: a functional organization that supported above-average stability of species coexistence.

“When you have species on the move because of environmental upheaval, or you force species together into communities in which they did not co-evolve, those systems are almost invariably less successful than systems where species have shared histories,” says Roopnarine. “Today, we can’t tinker with ecosystems, have them fall apart functionally, and expect life to carry on and recover in a way that normally takes tens of thousands of years to happen. The fossil record shows this approach isn’t sustainable.”

The team modeled millions of alternate histories to better understand the Karoo’s collapse and recovery. They based their models on direct and indirect evidence of interactions from the fossil record: Fossilized stomach contents and skeletal damage indicate signs of predation, while body size, skull size, and habitat indicate potential species interactions. The team also drew analogies to modern animals that are ecologically similar or closely related on the evolutionary tree. Using computerized mathematical models, they then conducted millions of “thought experiments” on each community to test the effect of changing a community’s functional organization on its extinction rate.

One alternate structure the team modeled eliminates all functional organization, so that species are free to interact without any established hierarchy of who eats whom. Another alternative preserves the original number of functional groupings and the number of species, but changes the interactions among them so that energy flows differently between species. A third alternative changes the number of species in each functional group altogether—such as the ratio of predators to prey—but this made a negligible difference in the community’s stability.

“We found that any kind of species organization is better than no organization, but some patterns are definitely superior to others,” says Angielczyk. “Exactly how species evolution leads to the assembly of stable communities from the wide range of possible alternatives, and the mathematical reasons for why those alternatives differ in stability, are some of our next big questions.”

The team hopes that better understanding periods of persistence will inform how far along modern society is in disassembling current planetary systems. “The points of departure for species and ecological communities aren’t necessarily the same,” says Roopnarine. “The question is whether our entire planet has already turned down a new ecological and evolutionary pathway entirely or if we’re still operating in the capacity of our current system.”

The study findings highlight the importance of the fossil record in helping to forecast the future.

“The ecological systems we have today are documented products of geological and evolutionary history—they’re not easily made nor easily recovered,” says Roopnarine. “We have a choice in alternate histories here, and my hope is that we choose to take care of the planetary system that has supported life as we know it for millennia.”

About the Field Museum of Natural History

Now in its 125th year, the Field Museum is a forward-thinking scientific leader on a mission to explore, protect, and celebrate nature and culture. The Field takes part in groundbreaking research all over the world while maintaining one of the world’s largest collections of artifacts and specimens, used to inspire discovery, spark public engagement with science, and uncover solutions for a better world.

Without coral reefs, we’d be high and dry. Celebrate World Reef Day by supporting Academy programs that protect ecosystems and connect people with our blue planet.