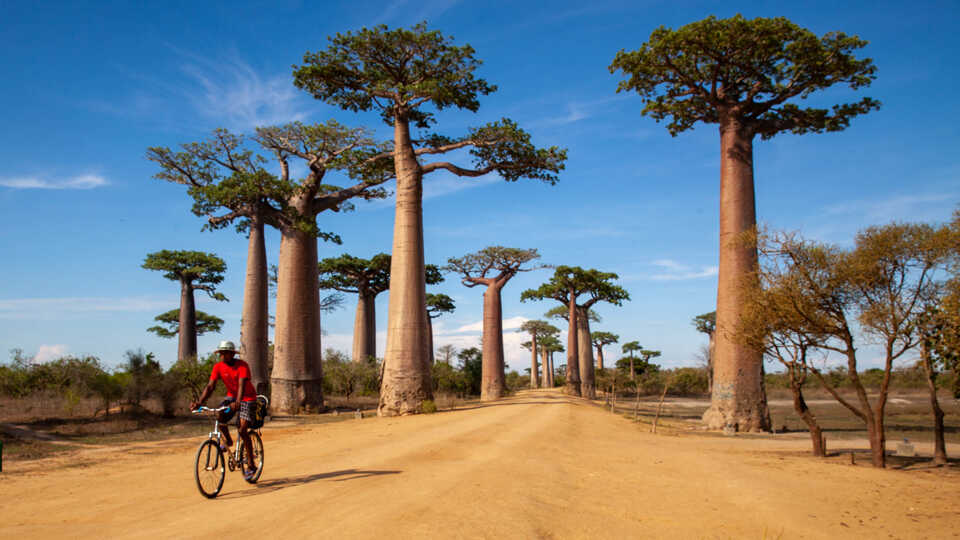 A man rides his bike through an iconic baobab forest in Madagascar. (Brian Fisher © California Academy of Sciences)

December 2, 2022 (SAN FRANCISCO, CA) — In two new papers published yesterday in Science, California Academy of Sciences Curator Brian Fisher, PhD, and collaborators from more than 50 global organizations have undertaken a major review of Madagascar’s extraordinary biodiversity. Bringing together the most up-to-date resources and using cutting-edge techniques to predict conservation status, the team evaluated the threats facing terrestrial and freshwater biodiversity and looked at future opportunities for conservation and regeneration.

Madagascar—one of five focal archipelagos for the Academy’s Islands 2030 initiative—is one of the world’s foremost biodiversity hotspots, with a unique assemblage of plants, animals, and fungi, the majority of which evolved on the island and occur nowhere else. And yet these papers highlight that there is still much to learn, particularly for groups such as fungi and invertebrates, where current scientific species descriptions represent a small fraction of the full diversity present. Despite species descriptions accelerating in recent years, there is much to do to scientifically describe the full range of Malagasy species and to understand their past, present, and future.

“On the one hand, these reviews highlight the incredible efforts of many local and international scientists to document the diversity of Madagascar and how these results can address biodiversity loss,” says Fisher, who is an expert on Malagasy ant biodiversity. “But the study also calls out how little we know about some groups like arthropods. Arthropods are the glue that holds the forest together, but we still need to learn how many species exist in Madagascar and how many might have already gone extinct.”

Understanding the origins, evolution, current distribution, and uses of Madagascar’s extraordinary biodiversity is crucial to highlighting its global importance and guiding urgent conservation efforts. Among the 1,314 species of native terrestrial and freshwater vertebrates found in Madagascar, around 90% are endemic, meaning they are found nowhere else on Earth.

This unique diversity is in grave danger. The research team compiled available IUCN assessment data on plants and vertebrates, and used machine learning to predict the extinction risks for many species. Their analyses showed that overexploitation (the direct hunting and harvesting of species) and unsustainable agricultural practices affect 62.1% and 56.8% of vertebrate species, respectively, and each affects nearly 90% of all plant species. They conclude the current knowledge of Madagascar’s biodiversity and its decline indicates an urgent need for action.

Currently, protected areas cover 10.4% of Madagascar and are relatively well-placed to capture the island nation’s biodiversity. The team found that the network provides good coverage of the major habitats, particularly mangroves, spiny forests, humid forests, and tapia forests, but that subhumid forests and grassland-woodland mosaics have very low areas under protection (5.7% and 1.8% respectively). Nevertheless, 79.6% of threatened plants and 97.7% of threatened vertebrates occur within at least one protected area. Complementary to this, ex-situ collections hold 18% of vertebrate species and 23% of plant species. Maintaining and improving the quality of protection in these areas—along with effective ex-situ conservation, such as seed banks and breeding and reintroduction programs, and integrated community programs—will be the key to success.

Madagascar’s rich biodiversity has provided many opportunities for human utilization and there are many more useful properties waiting to be explored. The challenge is to find a balance between use of biodiversity and conserving the integrity of protected areas. The majority of Madagascar’s over 28 million inhabitants live outside of, but often very close to, protected areas. These communities face challenges connected to widespread poverty, which itself is related to the degradation of natural capital in the landscape, limited access to formal education, health care, and regulatory issues including land tenure.

Madagascar has made important progress toward achieving international climate, biodiversity, and sustainable development goals; providing a foundation on which to build in the coming decades. The researchers frame biodiversity as the greatest opportunity and most valuable asset for Madagascar’s future development—a key resource for a regenerative future and the well-being of its citizens.

They propose five opportunities for action to further conservation in a just and equitable way:

Fisher adds that what is crucial to achieving all of these goals is thoughtful, long-term partnerships with local communities. “For over 20 years, the Academy has been working alongside Malagasy researchers, resulting in the co-development of the Madagascar Biodiversity Center. It is only through this kind of deep, anti-colonial collaboration with local scientists, conservationists, and communities that a regenerative future can be ensured for Madagascar’s unique biodiversity."

The California Academy of Sciences is a renowned scientific and educational institution with a mission to regenerate the natural world through science, learning, and collaboration. Based in San Francisco’s Golden Gate Park, it is home to a world-class aquarium, planetarium, and natural history museum, as well as innovative programs in scientific research and environmental education—all under one living roof. Museum hours are 9:30 am – 5:00 pm Monday – Saturday, and 11:00 am – 5:00 pm on Sunday. Admission includes all exhibits, programs, and shows. For daily ticket prices, please visit www.calacademy.org or call (415) 379-8000 for more information.

The Institute for Biodiversity Science and Sustainability at the California Academy of Sciences is at the forefront of efforts to regenerate the natural world through science, learning, and collaboration. Based in San Francisco, the Institute is home to more than 100 world-class scientists, state-of-the-art facilities, and nearly 46 million scientific specimens from around the world. The Institute also leverages the expertise and efforts of more than 100 international Associates and 450 distinguished Fellows. Through expeditions around the globe, investigations in the lab, and analysis of vast biological datasets, the Institute’s scientists work to understand the evolution and interconnectedness of organisms and ecosystems, the threats they face around the world, and the most effective strategies for ensuring they thrive into the future. Through deeply collaborative partnerships and innovative public engagement initiatives, they also guide critical conservation decisions worldwide, inspire and mentor the next generation of scientists, and foster responsible stewardship of our planet.