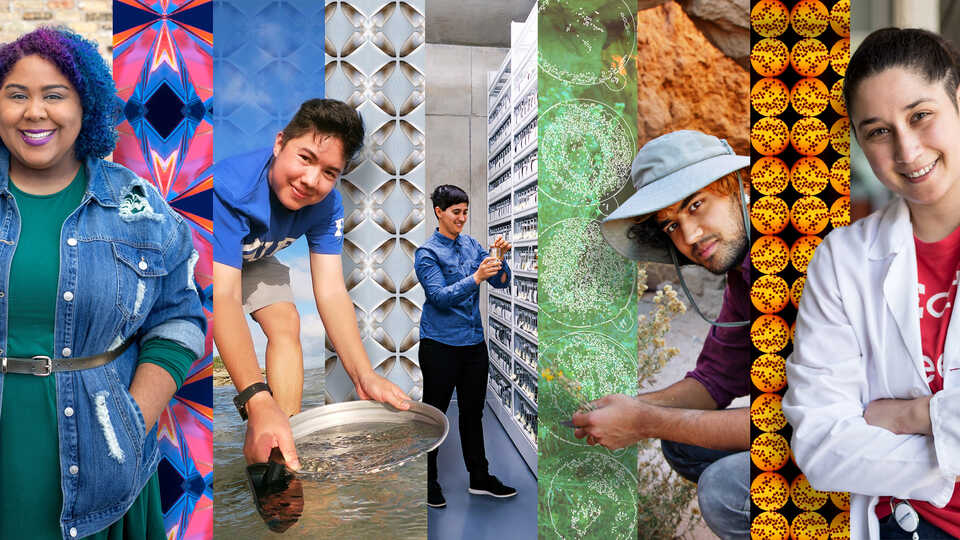 SAN FRANCISCO, CA (June 22, 2021) — This week, the California Academy of Sciences in San Francisco will debut New Science, a new exhibit that tells first-person stories of LGBTQ+ women and gender minorities of color working in STEMM (science, technology, engineering, math, and medicine) professions. The exhibit, which features nearly a dozen profiles of individuals who reflect a vital sea change in queer representation in STEMM, aims to recognize and amplify the significant contributions of groups historically underrepresented in the sciences, and in the process, diversify the faces and lived experiences of modern science.

The exhibit will officially debut at the Academy’s sold out Pride NightLife event on Thursday, June 24, an annual event for adults 21+ that celebrates Pride Month with after hours access to museum exhibits, music, and more. Online, that same night, viewers can tune into NightSchool: Queering Science, a virtual event featuring scientists whose queer perspectives and identities help drive new insights, discoveries, and previously unasked questions in their respective fields. The free, livestreamed event will feature several of the scientists profiled in the New Science exhibit, created in partnership with 500 Queer Scientists and with funding from an IF/THEN® Gender Equity Grant.

“New Science is all about showing the world that queer and intersectional identities are changing who does science and how science gets done,” says Dr. Lauren Esposito, the Academy’s Curator of Arachnology and Founder of 500 Queer Scientists, a powerful visibility campaign for LGBTQ+ professionals working in science, science education, and science advocacy. “I am in awe of the incredible people featured in the exhibit and their unique stories and pathways to careers in science, and I hope everyone who visits the exhibit either in person or online feels inspired as well.”

The New Science exhibit was made possible through an IF/THEN® Gender Equity Grant, awarded to the Academy in February by the Association of Science and Technology Centers (ASTC) with a goal to increase the visual representation of women and gender minorities in STEM across museum content. The Academy joins 27 other recipients around the U.S. working to showcase greater gender diversity in exhibits, displays, and materials as part of their broader efforts to advance diversity, accessibility, inclusion, and equity. The Academy also received one of four prestigious Moonshot Awards given to support extraordinary efforts that can be easily replicated or shared with other science centers and museums.

Beyond the Academy’s doors, this customizable exhibit will be made available for other institutions to easily and inexpensively recreate and display, allowing them to showcase the stories that resonate most with their audiences. Starting in mid-August, New Science will be available in a project library hosted by ASTC, where institutions can view and request downloadable assets to replicate in their own spaces. In addition, the Academy will host an immersive and interactive virtual version of the New Science exhibit on Google Arts & Culture’s new Pride content hub, featuring 19 first-person profiles plus additional content, helping to ensure these powerful stories extend beyond museum walls. In addition, all 23 profiles created as part of this exhibit will be featured on the Academy’s website.

Through the New Science exhibit, the Academy seeks to create space for the LGBTQ+ community to see themselves in STEMM, and to help all audiences better recognize the true diversity of STEMM practitioners in their communities.

IF/THEN® is part of Lyda Hill Philanthropies®’ commitment to fund game-changing advancements in science and nature. IF/THEN® seeks to further advance women in STEM by empowering current innovators and inspiring the next generation of pioneers. Rooted in a firm belief that there is no better time to highlight positive and successful female professional role models, IF/THEN® is designed to activate a culture shift among young girls to open their eyes to STEM careers by: (1) funding and elevating women in STEM as role models, (2) convening cross-sector partners in entertainment, fashion, sports, business and academia to illuminate the importance of STEM everywhere, and (3) inspiring girls with better portrayals of women in STEM through media and learning experiences to pique their interest in STEM careers. To learn more, visit www.ifthenshecan.org or follow IF/THEN® on Facebook, Twitter, Instagram and LinkedIn.

About the Association of Science and Technology Centers

Founded in 1973, ASTC is a network of nearly 700 science and technology centers and museums, and allied organizations, engaging more than 110 million people annually across North America and in almost 50 countries. With its members and partners, ASTC works towards a vision of increased understanding of—and engagement with—science and technology among all people. Visit www.astc.org or follow ASTC on Facebook, Twitter, and Instagram @ScienceCenters.

Google Arts & Culture puts the treasures, stories and knowledge of over 2,000 cultural institutions from 80 countries at your fingertips. If Google’s mission is to make the world’s information more accessible, then Arts & Culture’s mission is to make the world’s culture accessible to anyone, anywhere. It’s your doorway to explore art, history, and wonders of the world. Discover stories about cultural heritage ranging from Van Gogh’s bedroom paintings, Puerto Rico’s heritage, Sports in Australia or the women’s right movement to ancient Maya temples, Japanese Food and Indian Railways.

The California Academy of Sciences is a renowned scientific and educational institution with a mission to regenerate the natural world through science, learning, and collaboration. Based in San Francisco’s Golden Gate Park, it is home to a world-class aquarium, planetarium, and natural history museum, as well as innovative programs in scientific research and environmental education—all under one living roof. Museum hours are 9:30 am – 5:00 pm Monday – Saturday, and 11:00 am – 5:00 pm on Sunday. Admission includes all exhibits, programs, and shows. For daily ticket prices, please visit www.calacademy.org or call (415) 379-8000 for more information.