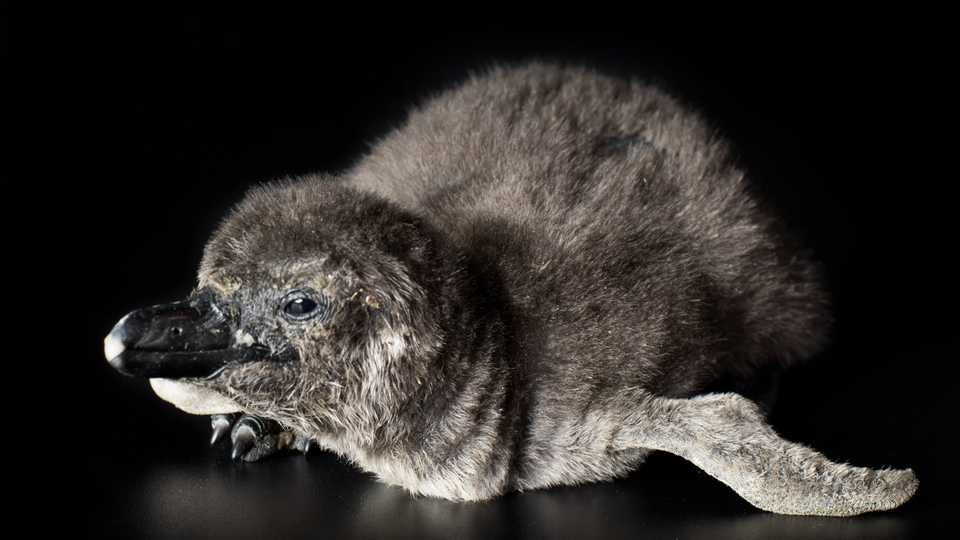 SAN FRANCISCO (April 10, 2013) — Today, biologists introduced a male penguin chick to the African penguin exhibit at the California Academy of Sciences in Golden Gate Park. Hatched on January 28, 2013, the chick is just over two months old and, until today, has been living with his parents in a private nest off of public view to give the family a chance to bond.

African penguins were classified as an endangered species in 2010 and are at very high risk of extinction in the wild. The Academy's African penguins are part of the Association of Zoos and Aquariums' Species Survival Plan (SSP), aimed at maintaining genetic diversity of captive populations through controlled breeding and collaborative exchange of offspring among partner zoos and aquariums. The Academy has a long and successful history of breeding African penguins as part of the SSP for this species, but this chick marks the first hatched at the new Academy building, which opened in late 2008. With the addition of its newest member, the colony is now at 16 happy, healthy birds.

The chick's parents, Robben (father) and Ty (mother), are a recommended breeding pair due to their genetically valuable gene pools. Like all new parents, the pair have kept close watch over their new arrival, taking turns caring for the bird. On average, it takes one year for African penguins to lose their juvenile plumage and develop their tuxedo-like appearance.

The public can enter the Academy's Name the Penguin Chick Contest, which runs through April 30. Academy staff will select the top three names based on originality and connection to the Academy's mission to explore, explain, and sustain life, including the African penguin SSP program. The final three names will be put out to public vote, and the winning name will be announced during a naming ceremony in May.

Visitors outside of the San Francisco Bay Area can view the new chick via the Academy's online Penguin Cam or by downloading the Pocket Penguins mobile app, where live feedings are broadcast daily at 10:30 am and 3 pm (PST).

The California Academy of Sciences is home to an aquarium, planetarium, natural history museum, and research and education programs, which engage people of all ages and backgrounds on two of the most important topics of our time: life and its sustainability. Admission to the Academy is: $29.95 for adults; $24.95 for youth ages 12 to 17, Seniors ages 65+, and students with valid ID; $19.95 for children ages 4 to 11; and free for children ages 3 and younger. Admission fees include all exhibits and shows. Hours are 9:30 am - 5 pm Monday - Saturday, and 11 am - 5 pm on Sunday. During peak periods, including some holiday weekends, an admission surcharge and extended hours may apply. Visit www.calacademy.org or call (415) 379-8000 for more.