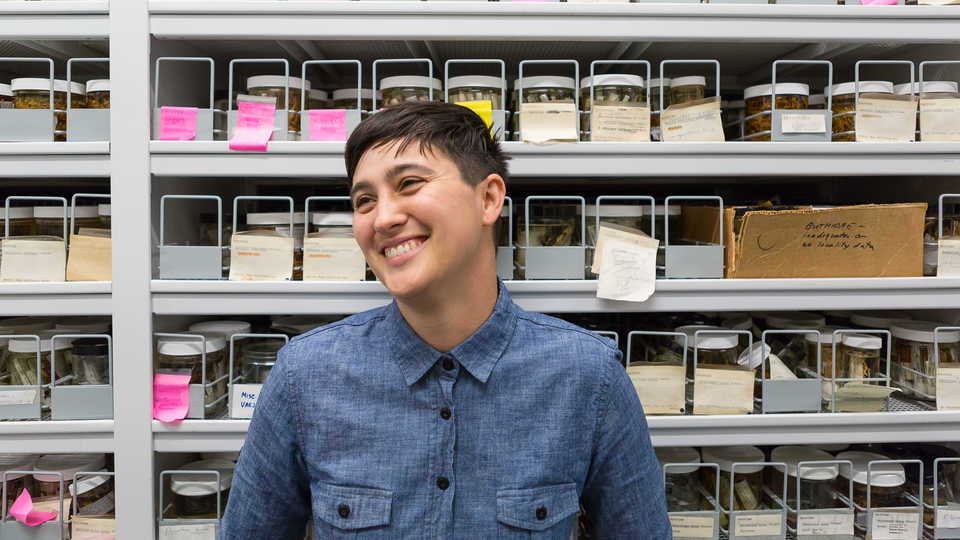 San Francisco (March 14, 2019)—The National Organization of Gay and Lesbian Scientists and Technical Professionals (NOGLSTP) has awarded Dr. Lauren Esposito, Schlinger Chair of Arachnology at the California Academy of Sciences in San Francisco, the organization’s 2019 Walt Westman Award for her work to create and launch the 500 Queer Scientists visibility campaign. This award is the highest national honor given to a NOGLSTP member who has shown dedication and commitment to the advancement of NOGLSTP’s mission. This prestigious award recognizes the unselfish and outstanding contributions of the honoree, whose activities—carried on continuously over a period of years—have brought honor and esteem to the organization by their very character.

As one of the world’s leading experts on scorpions, Esposito studies the patterns and processes of evolution in spiders, scorpions, and their venoms. In addition to her research, Esposito is passionate about public engagement and science education, empowering students and citizen scientists—both at home in the U.S. and abroad. In 2018, she co-founded 500 Queer Scientists, a powerful visibility campaign for LGBTQ+ professionals and their allies working in science, science education, and science advocacy that promotes diversity and inclusion in STEM. The goals of the campaign are to ensure the next STEM generation has LGBTQ+ role models, to help the current generation recognize they’re not alone, and to create opportunities for community connections and greater visibility within STEM. Since its launch, the campaign has received more than 850 self-submitted profiles and is still regularly receiving new contributions, shining a light on individuals working in STEM and STEM-supporting jobs and fostering professional connections within the LGBTQ+ community.

“When I first began this experiment of bringing the LGBTQ+ STEM community together by sharing our stories, I wasn’t sure what the response would be. Over the past eight months I have cried, laughed, and been incredibly humbled, but most of all I have felt overjoyed at our collective accomplishments and spirit,” says Esposito. “I’m excited for the next chapter of community building with 500 Queer Scientists by partnering with organizations, like NOGLSTP, who are working to advance the visibility of LGBTQ+ individuals in STEM so that we can demonstrate our collective strength and find support as students, professionals, and role models for the next generation. We are not alone!”

NOGLSTP is awarding Esposito the 2019 Walt Westman Award in recognition of the outstanding success of 500 Queer Scientists, the support it provides LGBTQ+ people in STEM, and her initiative and work to create it. An awards ceremony will be held as part of Out to Innovate 2019, a two-day career summit for LGBTQ+ students, faculty, and professionals in STEM held March 16-17, 2019 in Los Angeles.

Support the Academy for Giving Tuesday

Help California thrive!
Your gift will help fight climate change and biodiversity loss in the Golden State, inspire millions of visitors, and safeguard our 40,000 animals.