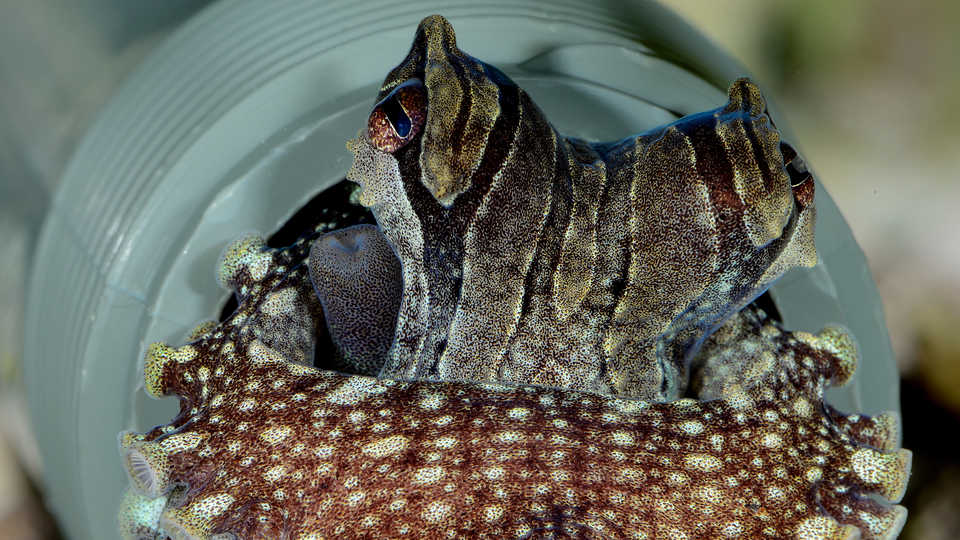 SAN FRANCISCO (March 5, 2013) — One of the world's most beautiful—and little-known—species of octopus will go on public display for the first time tomorrow. Initially discovered in 1991 but largely forgotten until now, the Larger Pacific Striped Octopus is about to crawl into the spotlight in a new display at the California Academy of Sciences. Academy biologist Richard Ross, who studies octopuses and their relatives, has spent the last 13 months raising and studying the behavior of this recently rediscovered species, along with Dr. Roy Caldwell of the University of California, Berkeley. While they are still working on a formal description of the species, which doesn't yet have a scientific name, they didn't want to wait any longer to share this spectacular animal with the public.

"I'm thrilled that Academy visitors will have the opportunity to view this fascinating animal up close in the aquarium, where they'll see just why its beauty, unique mating technique and social habits are intriguing the cephalopod community," says Ross.

When it comes to mating and reproduction, the Larger Pacific Striped Octopus defies conventional octopus behavior in several surprising ways. Because female octopuses have a tendency to eat their mates, the animals usually live solitary lives—and when they do come together to mate, they typically try to stay as far away as possible from their mate's mouth. However, pairs of Larger Pacific Striped Octopuses can live peacefully together in an aquarium, at times sharing a den, and they mate in an intimate beak-to-beak, or sucker-to-sucker, position. Additionally, unlike other octopus species in which the females tend to die after laying a clutch of eggs, these females can lay many clutches of eggs over the course of their lives.

This behavior has earned the animals a spot in the Academy's Animal Attraction aquarium gallery, which highlights the remarkable and sometimes surprising techniques animals have developed for producing offspring and attracting mates. The Academy will initially display one female in the gallery, adding a male soon after. The display is accompanied by an iPad exhibit label featuring video footage of their mating behavior. Based on his observations to date, Ross expects that the male and female will live together without undue aggression, mating often. He plans to raise and study the paralarvae they produce to learn more about the animal's life cycle and develop captive breeding protocols for the species, which is currently known from only a few locations off the coast of Nicaragua.

In addition to its surprising mating tactics, the Larger Pacific Striped Octopus is also remarkable for its dramatic coloration, which can switch from a dark reddish hue to black with white stripes and spots in fluid waves. The octopus can also assume different shapes, both flat and expanded.

In the wild, the Larger Pacific Striped Octopus is thought to live in groups of up to 40 or more individuals. To monitor the behavior and development of the octopuses in captivity, Ross will first display one male and one female, then introduce other octopuses of varying sex to the tank to observe group dynamics, reproductive patterns and territorial behaviors. He will conduct regular work sessions to study their eating patterns, ability to understand enrichment activities, nesting habits and color patterns in relation to social interaction.

The California Academy of Sciences is home to an aquarium, planetarium, natural history museum, and research and education programs, which engage people of all ages and backgrounds on two of the most important topics of our time: life and its sustainability. Admission to the Academy is: $29.95 for adults; $24.95 for youth ages 12 to 17, Seniors ages 65+, and students with valid ID; $19.95 for children ages 4 to 11; and free for children ages 3 and younger. Admission fees include all exhibits and shows. Hours are 9:30 am - 5 pm Monday - Saturday, and 11 am - 5 pm on Sunday. During peak periods, including some holiday weekends, an admission surcharge and extended hours may apply. Visit www.calacademy.org or call (415) 379-8000 for more information.