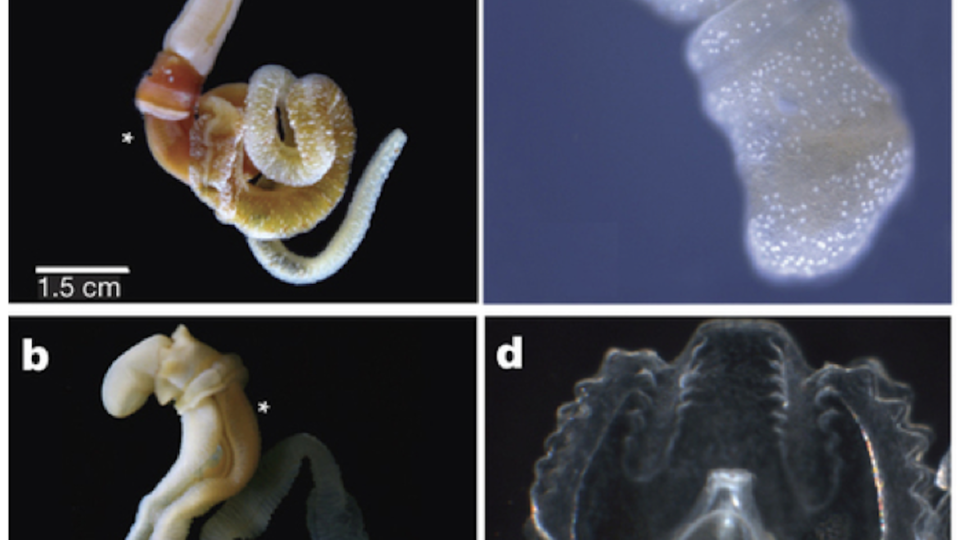 Since time immemorial, humans have classified the multitudes of plants and animals everywhere we’ve lived, worked, and explored. In the early 18th century, Carl Linnaeus laid the foundations of “binomial nomenclature,” a system of naming and grouping that scientists still use to organize our understanding of the living world.

But the “tree of life” set down over the last three centuries gets redrawn as today’s scientific tools reveal new information. Instead of relying on visual clues—both of these animals have wings, they must be related—modern scientists refine our understanding with genetic analysis, tweaking and reconstructing the evolutionary history that’s reflected in the relationships of Earth’s diverse species.

So when Oleg Simakov of the Okinawa Institute of Science and Technology and his co-authors of a recent paper in Nature decided to investigate the genetic similarities of two species of acorn worms (loosely related to sea stars, cucumbers, and urchins), it wasn’t to indulge in esoteric science. It was to help redefine our understanding of the interconnectedness of all species using modern genetic analysis, an ongoing project with contributions from scientists worldwide.

Oleg and his team sequenced all 19,000 of the genes in Saccoglossus kowalevskii and Ptychodera flava (there’s the binomial nomenclature courtesy of Linnaeus) using methods only recently cheap and fast enough to be widely applied. Their work confirmed some relationships “inferred from developmental and morphological characters,” or more simply, guessed by looking, as scientists did before DNA sequencing. The team pegged the evolutionary divergence of the two species at 370 million years ago based on a constant rate of change in their DNA, known as a molecular clock. Which places their most recent common ancestor, and the split in their branch of the tree of life, in the Devonian period.

The genetic sequences from S. kowaleskii and P. flava give us more than just their inter-relationship: Oleg tried to solve a long-standing mystery of the similar-looking Xenoturbella worm, a creature that defies classification. In the superphylum Deutoerstomia, a taxonomic group including chordates (including vertebrates, echinoderms (sea stars), and hemichordata (acorn worms), there are two species of worm that don’t fit in anywhere. Currently placed in their own phylum, their ancestry frustrates biologists looking for their relatives. Oleg compared the DNA of acorn worms with Xenoturbella, and while he “cannot rule out a deuterostome placement,” he suggests that the genes he sampled “generally do not support” putting the taxonomic misfit in the same category as acorn worms.

With over eight million animal species on Earth, determining every inter-relationship of every living thing may be the largest jigsaw puzzle ever attempted. Luckily, Oleg and his 59 co-authors aren’t alone. Scientists all over the world, including at the Academy, are reaffirming old and redrawing new relationships every single day. And thanks to the power of the internet, all of these changes are documented on a beautiful and informative website called, appropriately, the Tree of Life Project. Check it out online, and come by the Academy to see some of these relationships visualized in our many exhibits on evolution.

(Not all life is beautiful, but if you want to check out videos of these unattractive, detritus-eating marine worms, click here or here.)