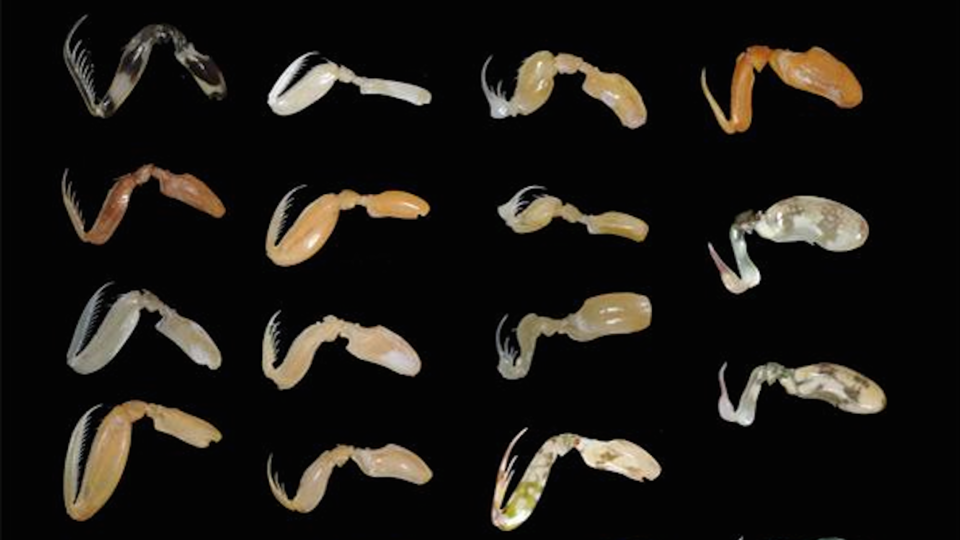 Mantis shrimp are awesome! It’s not their bright colors, diversity (there are over 400 species!), or interesting vision that draw us to the stomatopods, but rather the strength and speed of their spring-like claws to smash or stab their prey that makes them a favorite here at Science Today.

These cigar-sized crustaceans’ front claws can deliver an explosive 60-mile-per-hour blow—akin to a bullet leaving the barrel of a gun—using a mechanical system. Biological springs, latches, and levers power those fast movements, enabling mantis shrimp to strike much more swiftly than would be possible with muscle power alone. And each species packs their characteristic punches quite differently, with a variety of “tools,” from spiny and barbed spears to hatchets and hammers.

Scientists at Duke University were curious about the evolution and diversity of these tools, and launched “a more rigorous exploration of how mechanical properties influence evolutionary patterns and processes,” according to their recent paper in the Proceedings of the Royal Society B. An age-old question in evolution is how form and function (in the mantis shrimp’s case, the mechanical system plus the need to capture prey) limit or promote diversity in species, and the team felt these claws would be a perfect way to test this question.

Duke researchers Philip Anderson and Sheila Patek took careful measurements of nearly 200 mantis shrimp specimens representing three dozen species, calculating each specimen’s ability to transmit muscular force and motion to the part of the claw that swings out to smash or spear their prey—a mechanical property known as kinematic transmission.

When the researchers mapped their measurements onto the mantis shrimp family tree, they discovered that certain parts of the claw were more strongly associated with changes in strike mechanics than others—enabling the other parts (the spears, hatchets, and hammers) to evolve relatively independently without compromising the mantis shrimp's award-winning wallop.

“This research sheds new light on how these amazing movements evolved,” Anderson says.

Giving us another reason to be impressed by those mantis shrimp claws! Told you they were awesome.