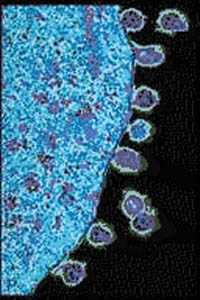 Usually we think of viruses as bad. But what if, like some superhero comic book, we could transform these bad guys to do good, and have them help society instead of harm it?

That was the subject of the first event of Brilliant!Science, a week long biosciences festival co-hosted by the Academy and the Gladstone Institutes. “Infectious Cures: Hijacking Viruses To Overcome Disease” was an “intimate conversation” with Dr. Leor Weinberger of the Gladstone Institutes held Thursday at the Commonwealth Club.

Moderated by the Academy's microbiologist, Shannon Bennett, Weinberger started the conversation by giving us the background of the bad guy virus—in this case, HIV.

First he gave us the numbers—HIV has killed 30 million people, 34 million are currently living with AIDS (the disease caused by HIV), 3.4 million of those are children and 16.6 million children have been orphaned due to the disease.

The antiviral drugs used to treat those infected with HIV are good, Weinberger stressed, but don’t reach everyone who needs them. Plus, the extreme regimen of taking the drugs makes it difficult for many who do have access. Weinberger also introduced the idea of the “superspreaders”—these are small groups of people that engage in high-risk behaviors and are more likely to transmit the virus. In the case of HIV in Africa, many of these superspreaders are sex workers and truck drivers.

After Weinberger gave us an idea of how wicked a bad guy HIV truly is, he then explained how the virus commits its crimes inside our bodies.

Weinberger, like many researchers, wants to stop HIV in its tracks. In his lab, his team is genetically engineering HIV—keeping its outer structure virtually the same. He copies the genetic material within the virus and “erases” much of the code, making a smaller version that can replicate faster. He calls this smaller version TIPS, for Therapeutic Interfering Particles.

Because TIPS is similar to HIV, it can enter the white blood cell just as easily. But since TIPS is smaller and faster it can outcompete HIV, turning that white blood cell into a TIPS-making factory instead of an evil HIV factory.

Even better, TIPS is transmitted just like HIV, meaning those evil sidekicks—the superspreaders—actually begin transmitting TIPS, instead of HIV, to the very people that need access to something that stops HIV.

Even better still, TIPS is able to evolve as HIV evolves. One challenge of viruses is that they evolve quickly, becoming resistant to vaccines (think of our yearly flu shots). But TIPS is able to keep up with HIV.

This all sounds too good to be true, right? Weinberger and team have TIPS working well in petri dishes in their lab. But as with many new solutions, it needs more testing, more funding. From bench to market is at least five years in any situation, Weinberger said. So keep your fingers-crossed.

And if it works on bad guys like HIV, why not other viruses? Stay-tuned.