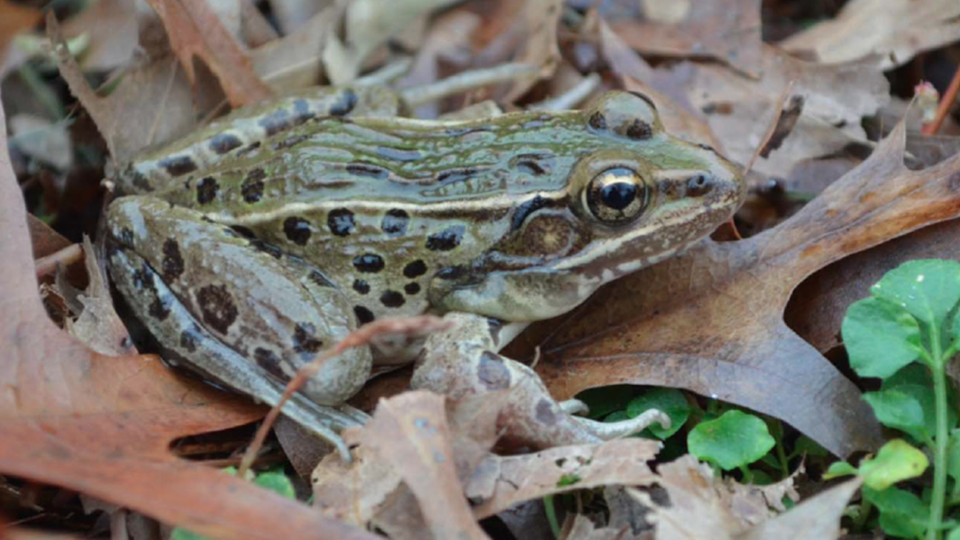 A melange of surprising animal stories…

How do you find a new species in a large urban area? You listen. That’s how scientists discovered a new species of leopard frog, named Rana kauffeldi, in New York City, of all places. Among other information, scientists analyzed acoustic and genetic data to characterize the new species and distinguish it from neighboring frogs. (You can look and listen here.)

Publishing in PLoS ONE this week, the researchers note that this city frog’s range also extends to the north and south, following a largely coastal lowland distribution from central Connecticut to northeastern North Carolina, making it a suburban frog, too. The team also suggests that due to the frog’s location preferences, centuries of habitat loss may threaten the species.

Speaking of good listeners, Maculinea butterflies are so good at listening to Myrmica ants that the butterflies are able to mimic the sounds produced by the ants. Why would they do such a thing? Ant colonies are nice places to live—well-protected, environmentally-stable, and resource-rich spaces—as long as you fit in with the ants.

The University of Turin’s Francesa Barbero and her colleagues have been listening in on ants and their Lepidopteran invaders for many years. The team has found that butterfly larvae fool the ants into thinking they are ant larvae. But one thing that puzzled the team was how these butterflies are given the royal treatment in the ants’ nest—fed first and fed most, even in times of scarcity when real ant larvae might starve. This type of privilege is normally reserved for the queens of the nest—do the butterflies actually mimic the queens, not just the worker ants?

By comparing the acoustic signals and analyzing the responses of the ants, the scientists found that the caterpillars indeed mimic the sound of their host queen ants and trick the worker ants into cleaning and feeding them in preference to their own offspring. (ScienceShot has the eerie sounds made by the ants and butterflies.)

In 1960, there were only 15 Galapagos tortoises left on the island of Española in the Galapagos. Habitat destruction, mostly due to feral goats, was a leading cause, but in the past 50 years, researchers have been working diligently to restore that tortoise population—eradicating the goats, restoring the habitat, and using captive breeding programs to increase the population.

And the efforts seem to be a success, according to a new study in PLoS ONE. “Now there are some 1,000 tortoises breeding on their own. The population is secure. It’s a rare example of how biologists and managers can collaborate to recover a species from the brink of extinction,” says lead author James P. Gibbs, of SUNY College of Environmental Science and Forestry.

But there’s still more work to do in ecological restoration of the island, Gibbs says. “This is a miraculous conservation success accomplished by the Galapagos National Park Service, but there is yet more work to fully recover the ecosystem upon which the tortoises and other rare species depend.”