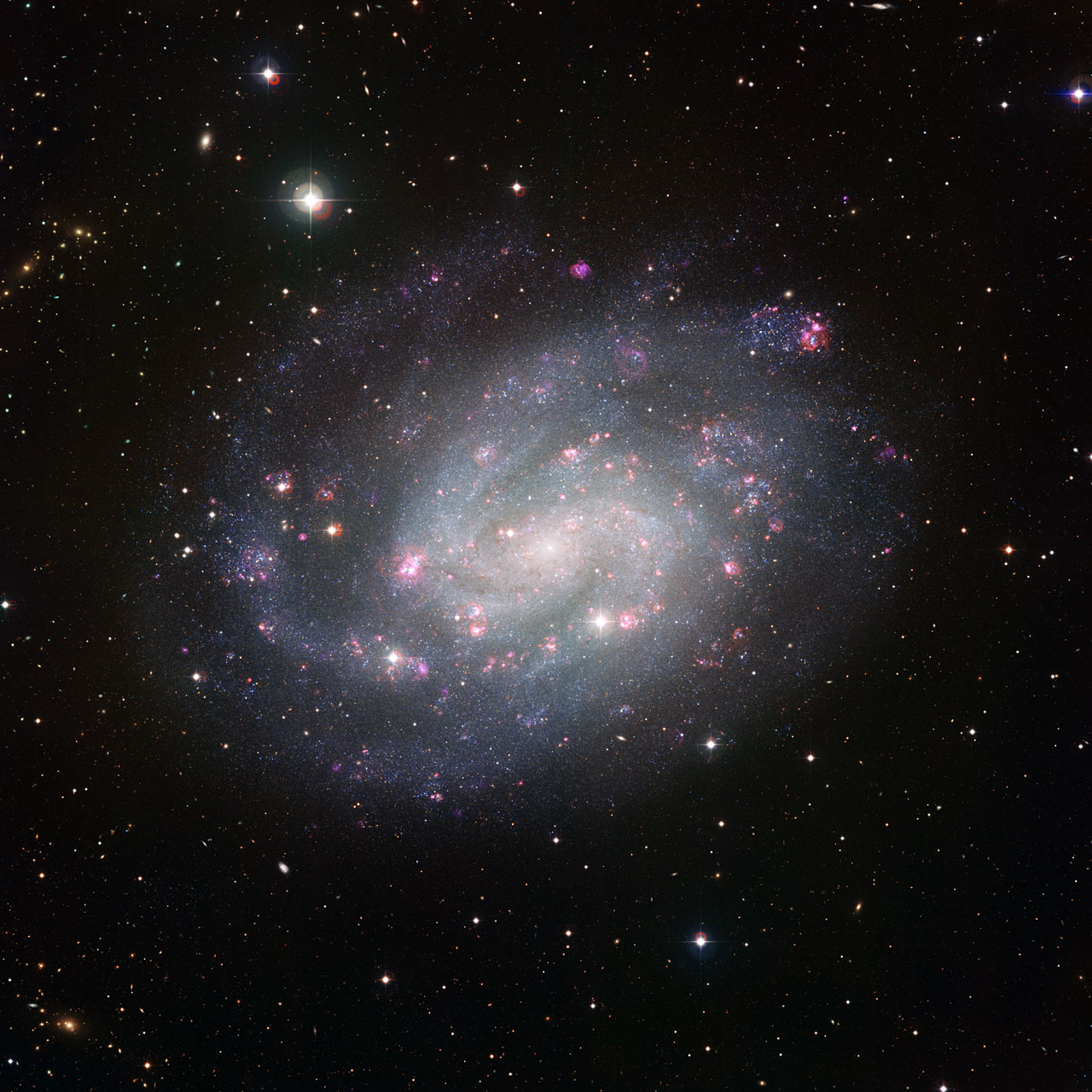 Coming at you from the desk of the Director of the Morrison Planetarium…  (A day late because I screwed up posting yesterday.)

The third Thursday of every month, the Morrison Planetarium hosts “Universe Update” at the 7:30 and 8:30 planetarium shows during NightLife. I select my favorite astronomy stories from the past month, and I give a brief run-down of current discoveries while taking audiences on a guided tour of the Universe. Y’see, the planetarium sports a tricked-out three-dimensional atlas of the Universe, so I can take you places virtually while talking about the latest astronomy news.

I always start at Earth and work my way out to cosmological distances, so I’ll list the news stories in the same order—from closest to farthest from home.

A mere 400,000 kilometers (give or take) from Earth, NASA’s Lunar Reconnaissance Orbiter (LRO) just completed the exploration phase of its mission and will now begin its science mission: take a look at the official release for more details. But basically, this means that they’re going from a mission dedicated to find places to visit (the so-called exploration phase) to a mission dedicated to producing results of scientific interest. As part of the hand-off, a press conference highlighted some of the most exciting results from the mission’s first year.  Check out Thursday’s Science Today blog for more details.

Also in honor of Earth’s nearest celestial neighbor, you can celebrate International Observe the Moon Night this Saturday. NASA got so excited about it they actually had a press release describing the international character of the event. For those in San Francisco, you can check out the event at Land’s End hosted by the San Francisco Amateur Astronomers (a.k.a. the SFAA).

Moving on to Mars… The Phoenix lander may have ended its mission a while ago, but sifting through data sent back by the lander has revealed fascinating details about Mars’s watery past. Liquid water, it seems, remained fairly close to freezing during most martian history—no Yellowstone on the Red Planet! This could have interesting implications for the likelihood of life on Mars.

As you may recall from fifth grade, asteroids fill orbits between Mars and Jupiter. What you may not have learned is that some asteroids travel in pairs, orbiting one another like Ida and Dactyl. Astronomers have now matched theory to observation, suggesting that bigger asteroids can give birth to smaller satellites, but the smaller ones are never more than 40% the size of their parent asteroid.  Details here.

During last night’s program, I completely forgot to describe a terribly exciting result announced earlier in the month: a new way to weigh planets! Typically we determine the masses of planets by studying orbital dynamics: the motion of moons in a planetary system or the trajectories of spacecraft interacting with a planet. Turns out that works pretty well, but the new technique could provide more accurate results for some planets. Radio astronomers used variations in the observed timing of pulsars to refine estimates of the mass of planetary objects in the Solar System. If you really want to geek out, take a look at the original paper describing the results!

Mentioning Pluto in any planetarium show always elicits a reaction, so I try to bring it up whenever I can. People should really just learn to let go, ’cuz hey, Pluto’s in good company: Kuiper Belt Objects (KBOs), Trans-Neptunian Objects (TNOs), and other acronyms share its orbital space, so we don’t need to feel too sorry for the supposedly demoted planet. Not like it’s lonely out there. Germane to that point, the Hubble Space Telescope just reported the discovery of more playmates for Pluto in the form of fourteen elusive TNOs.

And just for kicks, before we head any farther from home, you might want to check out a tour of recent images from around our Solar System.

In news about stars, the CoRoT spacecraft used “stellar seismology” to detect regions of magnetic activity on a star almost 100 light years away.  According to the press release, observations suggest that the star goes through cycles much like the Sun, but much more quickly… The Sun takes eleven years to go from solar maximum to solar minimum, but the attractively-named HD49933 does the same thing in less than a year! Et si vous parlez français, vous pouvez lire le communiqué de presse.

Another orbiting observatory, the Spitzer Space Telescope, provided observations of a star with a disk of material surrounding it—a disk that could eventually form planets. And we all love planets! (At least those of us who live on them.) What astronomers found interesting was that the disk seems to contain phyllosilicates, which could provide a carrier for water that could form oceans on the surfaces of distant worlds. A long chain of reasoning (phyllosilicates in disk that could form planets that could end up with oceans filled with water packed into phyllosilicates), but tantalizing nonetheless. (Believe it or not, by the way, astronomers actually have entire conferences devoted to topics such as “The Delivery of Volatiles and Organics.” How cool is that?)

From the ground-based Keck Observatory comes a remarkable surprise: astronomers managed to take the spectrum of an extrasolar planet! Of the 490-some-odd known planets, only six have been imaged, so this is quite an achievement. Not surprisingly, the spectrum threw astronomers for a loop, revealing a planet much hotter than they expected.

A case of stellar cannibalism made the headlines like any good violent crime: you can read about the shocking events direct from the source, from the BBC, or from Wired Magazine.

Also pretty, this image of NGC 300 from the European Southern Observatory. Galaxies such as NGC 300 have “low surface brightness,” which means they look rather diffuse and faint. Astronomers exploring the faintest of the faint managed to reveal relationships between galaxies—tendrils of gas that link tiny dwarf galaxies with more massive spiral galaxies in close proximity. The conclusion? Something that astronomers have suspected for quite some time: spirals eat dwarfs. Stellar cannibals and voracious galaxies? Who knew that celestial objects exhibited such ravenous behavior?

Hungry spirals might also consider consuming these particularly appetizing-sounding neighbors: Green Pea Galaxies! Amateur scientists working with GalaxyZoo identified these oddball galaxies in 2007, and astronomers have recently announced some ideas as to the nature of these phenomena. Quite a victory for citizen scientists!

Finally, I’ll wrap up with the wildest announcement of the month, the suggestion that at least one fundamental constant might be changing over regions of space. Fundamental constants, as you might guess from the name, tend to remain pretty reliable players in equations that describe the behavior of objects in the Universe.  The particular “constant” in question, the fine-structure constant, has inspired suspicions about its constancy for a while, and astronomers are suggesting that its value billions of light years away (around the energetic cores of young galaxies known as quasars) might differ from what we measure here on Earth.

Those rate as my favorite stories for the last month.  Stay tuned for next month’s “Universe Update.”