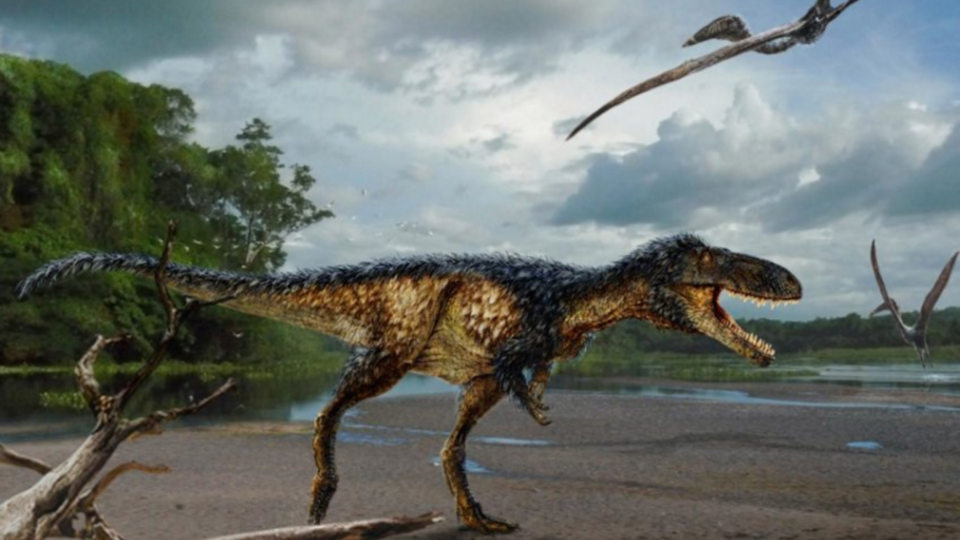 Tyrannosaurus rex was one of the biggest predators to ever roam the Earth, but its beginnings were much more humble. 170 million years ago, T. rex’s ancestors weren’t much bigger than you and me. And they didn’t have the smarts to match their eventual Cretaceous cousins 90 million years later. A dearth of fossils from about 90–100 million years ago left a 20-million-year gap in the ancestry and a mystery for modern-day paleontologists. So until this week, scientists weren’t certain how those early dinosaurs evolved into the seven-ton beast we know as T. rex.

Timurlengia euotica, described in the Proceedings of the National Academy of Sciences on Monday, may be the missing link. Discovered in the dry Kyzylkum Desert in Uzbekistan, the fossil dates back to 90 million years ago and was likely the size of a horse. While Timurlengia was still small for a tyrannosaur, studies of its head size and brain, including CT scans, demonstrate that it was on its way to being the sharp, fierce predator that T. rex became. The species’s skull was much smaller than that of T. rex, but key features reveal that its brain and senses, including keen hearing, were already highly developed. “Only after these ancestral tyrannosaurs evolved their clever brains and sharp senses did they grow into the colossal sizes of T. rex,” says study lead author Steve Brusatte of the University of Edinburgh. “Tyrannosaurs had to get smart before they got big.”

Brusatte writes about the prehistorically smart Timurlengia in Scientific American: “Little did they know that, eventually, these neurosensory features would come in handy, when the allosaurs went extinct around 80–90 million years ago and a new niche at the top of the food pyramid suddenly opened up. Their intelligence and sharp senses made tyrannosaurs perfectly equipped to swoop into the top-predator role.”

Despite its size and placement on the food chain, Timurlengia did pretty well for itself, says co-author Hans Sues, of the Smithsonian. “Timurlengia was a nimble pursuit hunter with slender, blade-like teeth suitable for slicing through meat,” he says. “It probably preyed on the various large plant-eaters, especially early duck-billed dinosaurs, which shared its world. Clues from the life of Timurlengia allow us to fill in gaps and better understand the life and evolution of other related dinosaurs, like T. rex.”

Timurlengia might have been superior to its future relative in one aspect: longer arms. Its upper limbs, slightly larger (at least proportionate to its body-size) than T. rex’s, will let this dinosaur avoid many jokes at its expense.