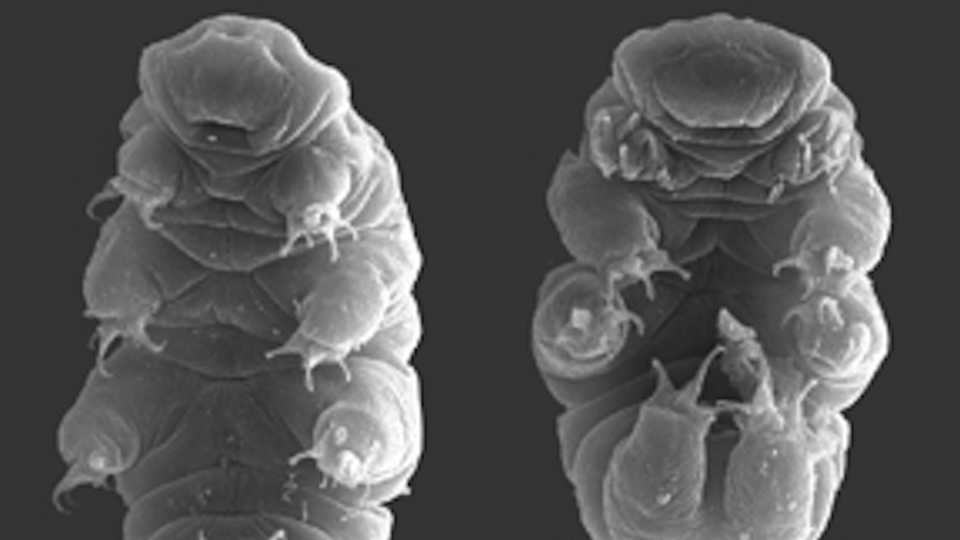 Tardigrades live in your backyard, the deep sea, the Antarctic, and everywhere in between. They have even survived the vacuum of space. And now researchers may have determined why these microscopic animals are so tough: horizontal gene transfer (HGT). Think of HGT as foreign DNA—the swapping of genetic material between separate species as opposed to inheriting DNA exclusively from mom and dad.

This isn’t uncommon, but the tardigrade genome has more of this foreign DNA than any sequenced before—a whopping 17.5 percent, or one-sixth of their genome, is foreign DNA. “We had no idea that an animal genome could be composed of so much foreign DNA,” says Bob Goldstein, of the University of North Carolina (UNC). “We knew many animals acquire foreign genes, but we had no idea that it happens to this degree.”

Goldstein and his colleagues discovered that the tardigrade species Hypsibius dujardini acquires about 6,000 foreign genes primarily from bacteria, but also from plants, fungi, and archaea. The team believes this transfer occurs when tardigrades reemerge from their “tun” state. Depending on environmental conditions, tardigrades go into a kind of hibernation, suspending their metabolism and remaining in a dehydrated state for up to ten years. During this desiccation process, the tardigrade’s DNA seems to break into tiny pieces. When the cell rehydrates, the cell’s membrane and nucleus, where the DNA resides, becomes temporarily leaky and DNA and other large molecules can pass through easily. Tardigrades can not only repair their own damaged DNA as the cell rehydrates, but they can also incorporate foreign DNA in the process, creating a mosaic of genes that come from different species.

This mosaic of genes protects tardigrades in the most extreme conditions, the team says. “Animals that can survive extreme stresses may be particularly prone to acquiring foreign genes—and bacterial genes might be better able to withstand stresses than animal ones,” says UNC’s Thomas Boothby. If bacteria can survive Earth’s most extreme environments for billions of years, their genes must be useful. Why not take a bit for yourself through HGT? “It is beginning to change the way we think about evolution and inheritance of genetic material and the stability of genomes,” Boothby continues. “So instead of thinking of the tree of life, we can think about the web of life and genetic material crossing from branch to branch. So it’s exciting. We are beginning to adjust our understanding of how evolution works.”