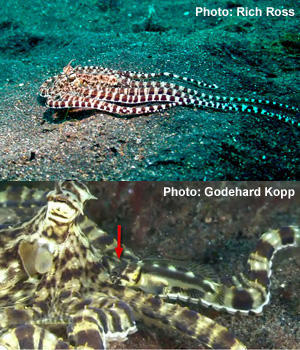 We love mimicry in nature and report on it often. But here’s something new: a mimic that mimics a mimic.

Remember this video we produced a while ago about the super cool mimic octopus? It compresses and conforms itself to look like a sea snake, flatfish, or lionfish—adjusting its look for different situations. Thanks to these brazen habits, it can swim in the open with relatively little fear of predators.

Well, it now appears the mimic octopus has a companion mimic. Last summer, Godehard Kopp of the University of Gottingen, Germany took this video while diving in Indonesia. A black-marble jawfish is seen closely following a mimic octopus as it moves across the sandy bottom. The jawfish has brown-and-white markings similar to the octopus and is difficult to spot among the many arms. The octopus, for its part, doesn’t seem to notice or care.

Kopp sent the video to Rich Ross and Luiz Rocha here at the Academy, who identified the jawfish species. Since this association had not been recorded before, they published their observations last month in the scientific journal Coral Reefs. The authors surmise that the jawfish hitches a ride with the octopus for protection, allowing it to venture away from its burrow to look for food—a case of “opportunistic mimicry.”

“This is a unique case in the reefs not only because the model for the jawfish is a mimic itself, but also because this is the first case of a jawfish involved in mimicry,” says Rocha, assistant curator of ichthyology. “Unfortunately, reefs in the Coral Triangle area of southeast Asia are rapidly declining mostly due to harmful human activities, and we may lose species involved in unique interactions like this even before we get to know them.”