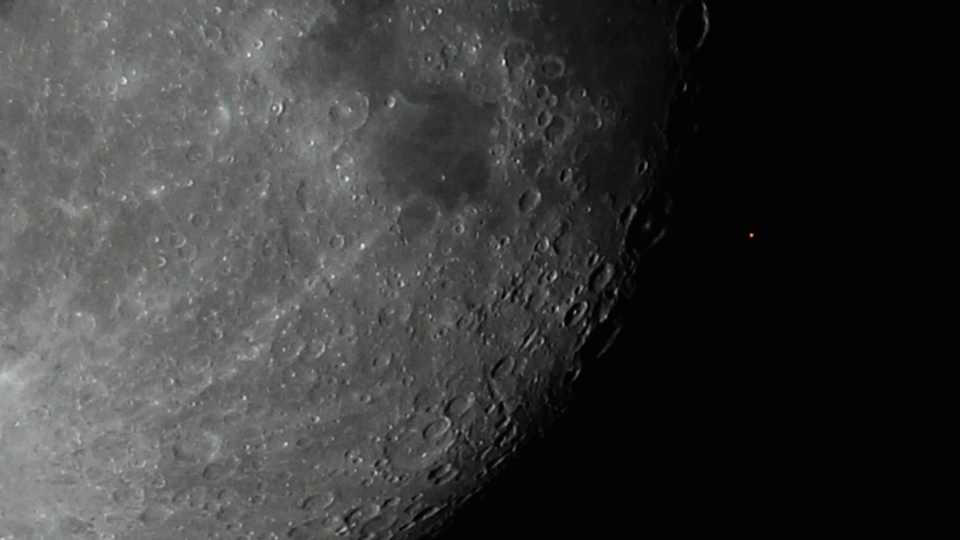 Not as spooky as it might sound, an event called an occultation will occur just after sunset on March 4. It’s something like a solar eclipse in that the Moon moves in front of a star as seen from Earth—only in this case, the star isn’t our nearby sun but the enormous orange giant star Aldebaran (the eye of Taurus the Bull). This star is 44 times the diameter of the Sun, meaning that if placed at the center of our solar system, its outer edge would reach halfway to Mercury. Yet, it’s so far away, at 630 trillion kilometers (390 trillion miles), that its light takes 65 years to reach us—a distance that astronomers refer to as 65 light years. From that immense distance, Aldebaran registers only as a tiny pinpoint of light—albeit a bright one. In fact, as the 14th brightest star in the night sky, Aldebaran is the brightest star close enough to the Moon’s path against the constellations that it can occasionally be occulted, or blocked from view, which makes this event easy to observe.

Unlike a similar event in early February, only visible in dark skies around the Mediterranean, this occultation will be seen, weather-permitting, by observers across most of the United States, but there will be no dramatic darkening of the sky, no effects on animal behavior, no fireworks, and certainly no corona as during a total solar eclipse. The star will simply wink out, like a distant streetlight being blocked from view by a passing truck.

So what’s the big deal?

More than just a game of celestial hide and seek, occultations of various types have played roles in many important astronomical discoveries. Careful observations were helpful in confirming the Moon’s diameter and lack of an atmosphere. When the planet Uranus moved in front of a distant star, the winking out of the star before and after it was hidden by the disk of the planet itself led to the deduction that the planet has rings. In 1676, observations of occultations by Jupiter of its own moons enabled Danish astronomer Ole Roemer to calculate the speed of light. As revealed in April 2016 by Franck Marchis, an astronomer with the SETI Institute during a Benjamin Dean Lecture at Morrison Planetarium, data from multiple observers tracking the occultation of a star by an asteroid enabled him and his team determine the shape of the asteroid and the fact that it has a moon. Amazing what can be learned from a simple wink or two!

Weather permitting, soon after sunset on March 4, watch Taurus the Bull wink as the first quarter Moon slowly whacks it in the eye. With binoculars, look just east of the Moon and see if you can spot Aldebaran as the darkened lunar limb approaches. For observers in San Francisco, the star will disappear behind the edge of the lunar disk at 7:02 p.m. PST, but times for other locations will vary, so check here if you’re in a different city. For San Franciscans, Aldebaran will reappear from behind the bright edge of the Moon at 8:16 p.m. PST.

Tracking occultations is just one way that amateurs can make significant and wide-ranging contributions to astronomical research. We can track timings of variable stars, search NASA image databases for particular features on the surface of Mars, or even hunt for extrasolar planets. You don’t need big telescopes or huge government grants to do some serious science!