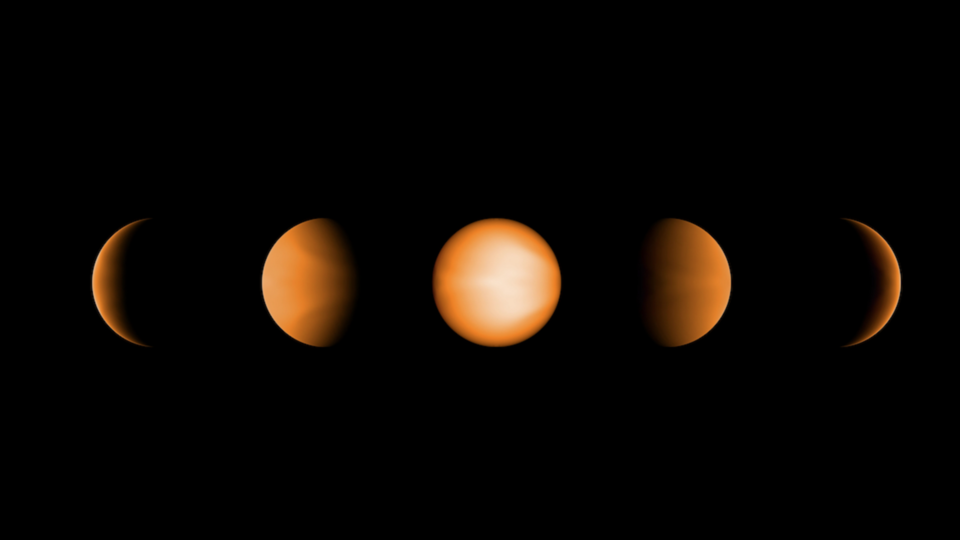 Léon Foucault opened his arms in greeting as he spoke to a few dozen guests gathered in the Meridien Room of the Paris Observatory in February of 1851, “Friends, I welcome you to the public opening of our great pendulum.”

He then lifted a glowing candle, and held it up to burn a string restraining the pendulum’s bob, continuing, “As you see the pendulum appear to change its plane of oscillation, you directly observe evidence that our home, Earth, rotates on its axis.” A few moments later, the flame severed the string, sending the pendulum on its first swing.

Today, hundreds of Foucault Pendulums are on display around the world, including one here at the California Academy of Sciences. When our docents engage with guests, the conversation often shifts from the mechanics of the pendulum’s behavior to the implications of Earth’s rotation on life. How would life have formed and developed if half the planet was always in sunlight?

WASP-121b is a planet type called a “hot Jupiter.” Hot Jupiters are gas giants similar to our Jupiter, with an orbital radius that puts them much closer to their parent star. WASP-121b orbits its star at 3% of the distance between the Sun to Earth, and its “year” is only 1.3 Earth days. At that distance from its star, its warm-side atmosphere heats up to 2,500 °C (4,500 °F), which puts it in an even warmer class of ultrahot Jupiters!

Ultrahot Jupiters also have a “cold” side, which can be 1,000 °C (nearly 2,000 °F) cooler than the hot side. On Earth, we have measured temperatures ranging from –89 °C (–128 °F) in Antarctica, and 56 °C (133 °F) in the aptly-named Furnace Creek, California. While this 150 °C (300 °F) variation seems extreme to humans, atmospheric conditions across this range are relatively consistent, such that we can breathe the air anywhere on the planet. In contrast, the difference in temperature for an ultrahot Jupiter is so extreme that molecules that are stable on the dark side may fall apart on the sunny side!

We learn about what materials make up planets using a technique called spectroscopy. Every atom and molecule emits a unique set of light at specific wavelengths depending on the elements it contains. Because of these different patterns, we can look at the light emitted from a material and determine what components make up the sample. This works both for light generated on Earth, where we can inject energy into a sample of gas (like a neon sign), and in space, where the light we receive from distant bodies can be observed by a telescope.

By using spectroscopy (and other methods, such as estimating the density of objects), we know that gas giants have generally similar compositions to each other. Like stars, most of their matter consists of hydrogen and helium, with between 3 percent and 13 percent heavier elements such as oxygen and iron. Gas giants also have clouds in their upper atmosphere made of compounds including ammonia (NH3) and water (H2O).

One mystery that researchers are currently exploring is why ultrahot Jupiters don’t seem to have as much water as we expect. A paper recently released proposes a theory that the planets do have a standard atomic composition overall, but the extremely hot temperature of the day side of the planet causes molecules (including water) that flow there to quickly disassociate.

On Earth, if we heat water to above 100 °C (212 °F), it will evaporate into steam and disperse into the atmosphere. But even in that gaseous state, it remains a water molecule, made up of two hydrogen atoms and one oxygen atom (and one day might condense within a cloud and fall on us as rain). When we burn flammable gasses such as methane (CH4), we know that part of the heat released is due to creating water from the hydrogen in the gas and oxygen in the air. We can also split water into hydrogen and oxygen gas through a process called electrolysis, which uses electricity to add enough energy into the water to allow it to break apart.

The new theory suggests that at 2,500 °C (4,500 °F), the hot side of WASP-121b is energetic enough that molecules are quickly exposed to enough energy to break their chemical bonds, releasing the component atoms to float about individually. The idea is bolstered by observation of water spectra at the boundary between night and day sides, where the planet is hot enough to emit light visible from Earth, and just cool enough that molecules can form without immediately disassociating.

We have it pretty easy here on Earth, far enough from our star to have abundant liquid water, and a day-night cycle that gives us some time to cool down!

Want to get hands on experience with spectroscopy? Sometimes, our Academy docents have a cart on the floor with spectrometers and a couple of element samples to observe. Look for the cart with a colorful periodic table on the front!

Want to try to help scientists find undiscovered planets—maybe even an ultrahot Jupiter or two—outside our Solar System? Try looking at real data on Planet Hunters!