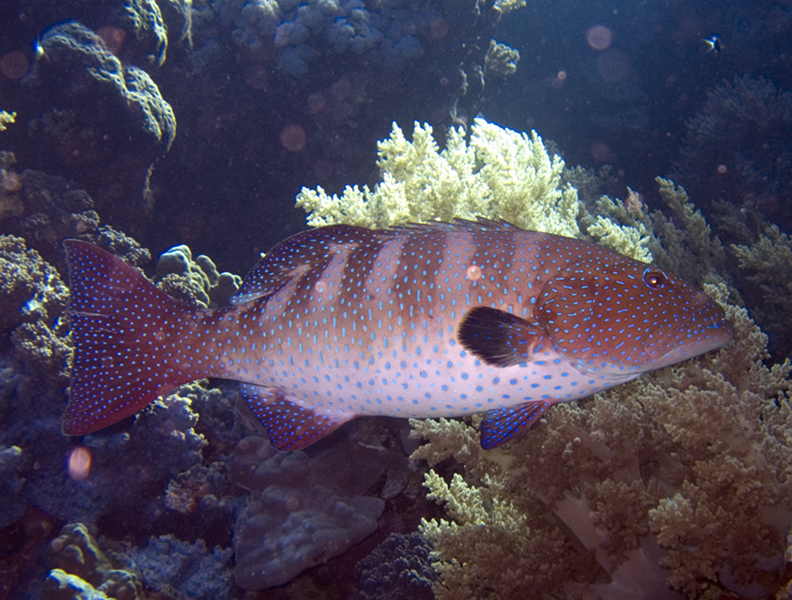 At over three feet, you'd think the solo coral grouper would be threatening enough. Threatening sure, but a successful lone hunter? Well, not so much, according to National Geographic News Watch:

When hunting alone, groupers only catch their prey about 1 out of every 20 attempts.

So the grouper teams up with the even fiercer moray eel, or the very large Napolean wrasse, to go hunting. The fish are looking for smaller coral reef fishes that hide from their predators under rocks and coral. When the grouper detects the hiding prey, it signals its hunting friend and together they both flush the prey out of hiding.

The cooperation, however, ends there. Whoever gets the prey, eats it whole. There's no sharing of the spoils. Still, for the grouper, it's worth the shared hunting, says National Geographic News Watch:

When they have help, the ratio is significantly better—about one out of seven.

What's most significant about this shared hunting are the signals the grouper makes to its partner during the hunt, say scientists. Researchers studying the fish observed dozens of events where groupers performed upside-down headstands with concurrent head shakes to indicate the presence and location of particular prey to cooperative partners. Their study, published last week in Nature Communications, call the groupers' signals "referential gestures". From the abstract:

It’s likely that these gestures have been understudied in non-primate species, say Academy researchers, who point to hunting dogs and even bee dances as potential consideration for referential gestures.

The researchers of the study say that the mental processes underlying these gestures in fish, apes and ravens are unclear and may well vary among these taxa. Their findings point to the fish having developed cognitive skills according to their particular ecological needs.

Whatever the cause, these hunting tactics are pretty extraordinary. Videos of the behaviors can be found here. For more information on the study, visit the University of Cambridge website.