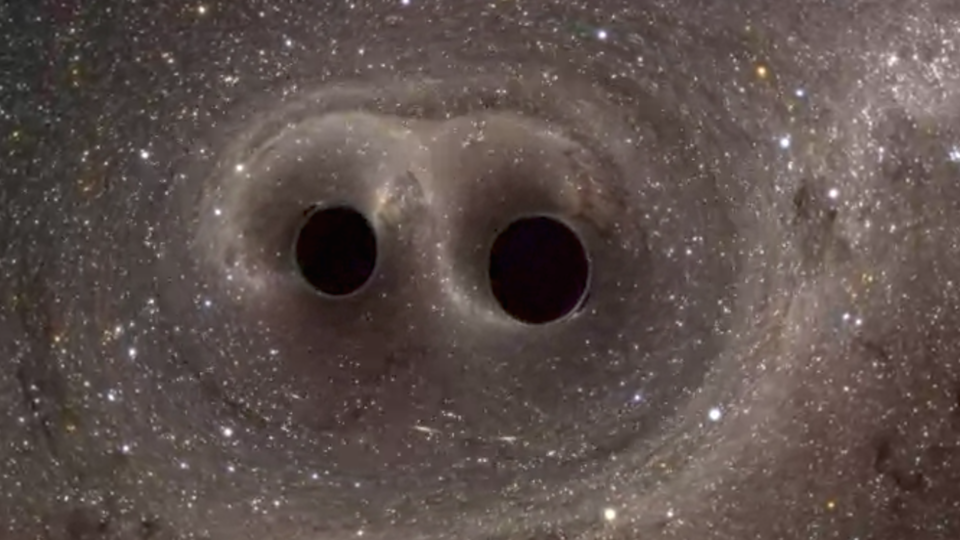 Black holes are notoriously difficult objects to learn about due to their dark nature; they are so incredibly dense that even light is unable to escape from their surface. Astronomers can therefore only study black holes indirectly, using infalling matter to infer small bits of information, or occasionally by observing stars that orbit around black holes at spectacularly high speeds.

In late 2015, the Laser Interferometer Gravitational-Wave Observatory (LIGO) detector gave the first direct measurement of not just a black hole, but a pair of black holes spiraling into each other and merging (for more information see our story here). Now the question is how these binary black holes form—together or as a matched set? To find out, astronomers are exploring an entirely new observational technique.

As these binary black holes gradually fall toward one another they expel energy in the form of gravitational waves, a sort of ripple in space that travels outwards in all directions. Gravitational waves themselves had been predicted for roughly a century, but the “ripple” they create is so phenomenally subtle that the precision of observations needed to find them was tremendous. Many attempts were made, but it required the sensitivity of the recently upgraded LIGO to detect these waves.

LIGO is able to achieve its remarkable sensitivity by observing patterns in laser signals with immaculate care. (Don’t worry, those lasers aren’t coming from space—they’re generated here on Earth!) Two finely-tuned laser beams travel down four-kilometer long tunnels perpendicular to one another; the lasers then bounce off mirrors back toward their origin and combine together. This whole setup forms what is called an interferometer. Under normal conditions these lasers meet with completely opposite phases and cancel each other out (they “interfere” with one another), but when the path length of one of the lasers changes, the combined beam experiences only partial cancellation. Using the remaining signal, LIGO can create a very detailed description of how that path changed; many phenomena can cause such changes, including the ripples in space due to a passing gravitational wave.

The scale of LIGO is so large (several hundred times longer that most commonly used interferometers) that even the slightest variations will produce a signal: micro-earthquakes or even heavy traffic, for example. This incredible sensitivity gives LIGO the ability to detect gravitational waves, but also requires several detectors spread around the world to account for and remove any local sources. LIGO currently has two of these sites up and running, with at least three more scheduled to open in the future.

Comparing these observed gravitational waves to theoretical models, astronomers can work backwards and determine the fundamental properties of binary black holes both before and after the merger. A new paper, published today in Nature, investigates the spins of the black holes to gain some insight into their formation. At least two different descriptions of binary black hole formation exist, but determining which one is correct has been challenging.

One possibility is that the binary black holes formed from stars of similar mass that were already orbiting each other. If those stars reached the end of their lives at roughly the same time, they would continue to orbit each other even after they completed their transformation into black holes. In this case the the stars would have formed together, and their spins would very likely be in the same plane as the binary system orbits.

Another possibility is that merging black holes meet each other in the wild, forming separately but not joining the binary system until later. These “dynamical” binary black holes, forming via gravitational interactions inside clusters of stars, would have their own individual spins largely unrelated to the plane they orbit each other on.

Until now it was effectively impossible to determine which of these processes was primarily responsible for binary black holes, since astronomers had no data to hold the theories up against. With the LIGO results, the team reports that, based on the observations made so far, dynamical black hole binaries seem to be the favored formation mechanism.

LIGO has thus far made three confirmed detections of black hole mergers, with one more detection that was likely a merger, but not with high enough confidence to definitively declare it. This is a small sample but scientists expect to observe several mergers per year. The authors mention that while the evidence so far gives good odds towards the dynamical model of black hole binaries, they’ll need about ten more observations before they can confirm it, which they estimate should take just a few years.

This discovery is important because it marks the first previously unanswerable question that gravitational wave astronomy is able to probe; astronomers have always been limited to electromagnetic radiation, light, as their only tool for learning about the Universe. As more gravitational wave observatories come online, and the accuracy and sensitivity of the detections continues to improve, the number and breadth of discoveries will grow. Not only are gravitational waves going to answer questions we couldn’t previously test, they’re going to prompt questions we didn’t know to ask.