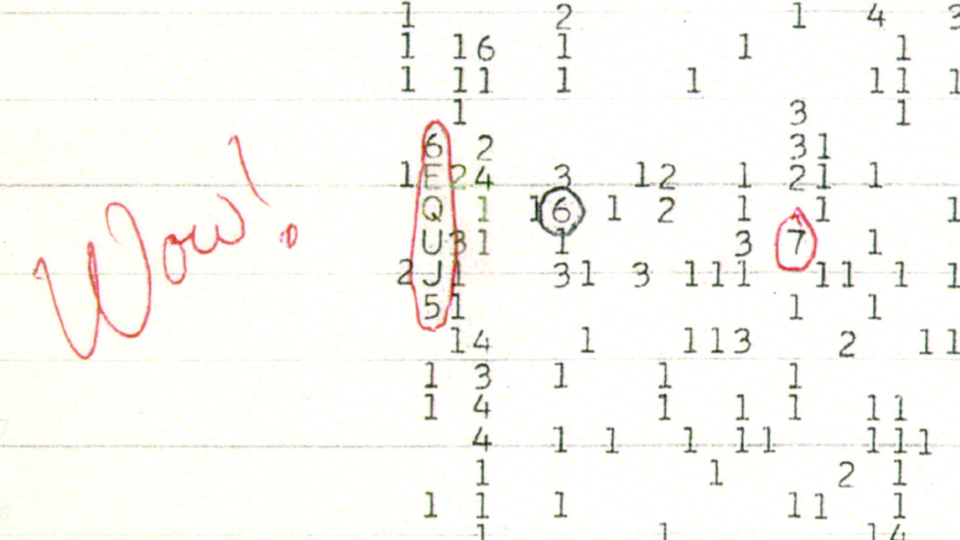 Editor's note: We published an update to this story here.

In 1977, astronomers operating the “Big Ear” radio telescope at The Ohio State University detected a puzzling burst of radio noise at 1420 MHz, lasting for 72 seconds and emanating from the constellation Sagittarius the Archer. So powerful and unexpected was the burst that one team member wrote “Wow!” on the readout, and the transmission was thereafter referred to as the “Wow!” signal. It was never detected again, and after eliminating one possible explanation after another, from a stray transmission from one of our own orbiting satellites or an airplane to some previously-unknown radio-emitting celestial phenomenon, the signal was hailed by some as possible evidence—maybe even the best—of extraterrestrial intelligence.

This situation sounds rather like that surrounding the strange fluctuations in the brightness of Tabby's Star, which some have sensationalized and attributed to a so-called “alien megastructure.” We wrote about that here and here.

However, a more prosaic explanation for the “Wow!” signal has been presented by Antonio Paris of the Center for Planetary Science in Tampa, Florida. In a paper appearing in the Journal of the Washington Academy of Sciences, he suggests that the signal may have come from one of two undiscovered comets that were in the same part of the sky at the time. In followup studies, subsequent appearances by both comets—between November 2016 and February 2017—yielded the detection of similar signals from one of them, Comet 266/P Christensen. In addition, signals from yet three other comets were found to resemble the 1977 burst.

With this evidence, the theory now being floated is that the radio emissions come from clouds of hydrogen surrounding the comet nuclei, the frequency of which the Big Ear was tuned to. The reason that the signal was never detected again, Paris says, was simply because—as is typical of comets—266/P had moved out of that part of the sky.

Now about that alien megastructure...