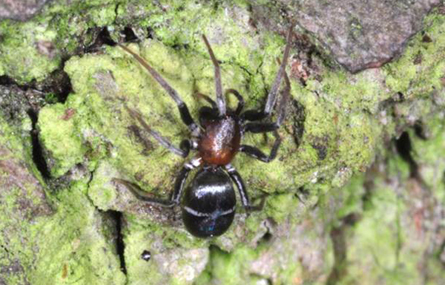 Even though most of them are harmless, spiders tend to have a bad reputation. But now, two publications find that maybe this bad rap is warranted.

The first, published this month in Behavioral Ecology and Sociobiology, looks at Micaria sociabilis, a small ground spider. Like several other spider species, M. sociabilis demonstrates sexual cannibalism, where one gender eats the other before, during, or after mating. Unlike most other sexual cannibals, however, for M. sociabilis, it’s the males that do the dining.

Females invest much more energy into egg production than males do in sperm production, which tends to make them pickier about who they mate with.

But why male cannibals? Czech scientists Lenka Sentenská and Stano Pekár decided to find out by watching M. sociabilis for about two years in the lab. Throughout the research, the spiders were well-fed to discount cannibalism due to hunger.

Over the course of 160 male-female spider encounters, the researchers noticed that when the males ate the females—and about one third of them did chow down—it was often prior to any mating. They also noted that when dining on a member of the opposite sex, the male spiders didn’t seem to discriminate between the size of the female or whether the female had previously mated. But when looking at the age of a female, the scientists found that the male spiders preferred to eat older females. And in fact, the males ate the older females about 60% of the time they were introduced. A brief video of the cannibalism is featured here. (Yum!)

“Our study provides an insight into an unusual mating system, which differs significantly from the general model. Even males may choose their potential partners and apparently, in some cases, they can present their choice as extremely as females do by cannibalizing unpreferred mates,” Sentenská and Pekár explain.

Another study, published last week in Ecology Letters, finds that for the species Anelosimus studiosus, it pays to be cruel.

Spiders in this species come in two distinct varieties—aggressive and docile. Aggression is passed down through the parents. Researcher Jonathan Pruitt wondered which temperament might be more successful in nature. So he paired them up in the lab—creating some aggressive-aggressive pairs, some docile-docile pairs, and some mixed. He then took the pairs, 90 in all, back into the woods where they were originally collected and watched them reproduce and colonize over the next five years.

For half of the pairs, Pruitt meticulously kept predators away. He left the rest to fend for themselves. For the tended spiders, the population sizes were similar after five years. But for the others, it was quite a different story.

On the other hand, three-quarters of the aggressive-aggressive colonies remained. Survival of the meanest, perhaps? At least when invaders threaten, says Pruitt in ScienceNOW. “Species without defense might be driven to extinction by enemies.”