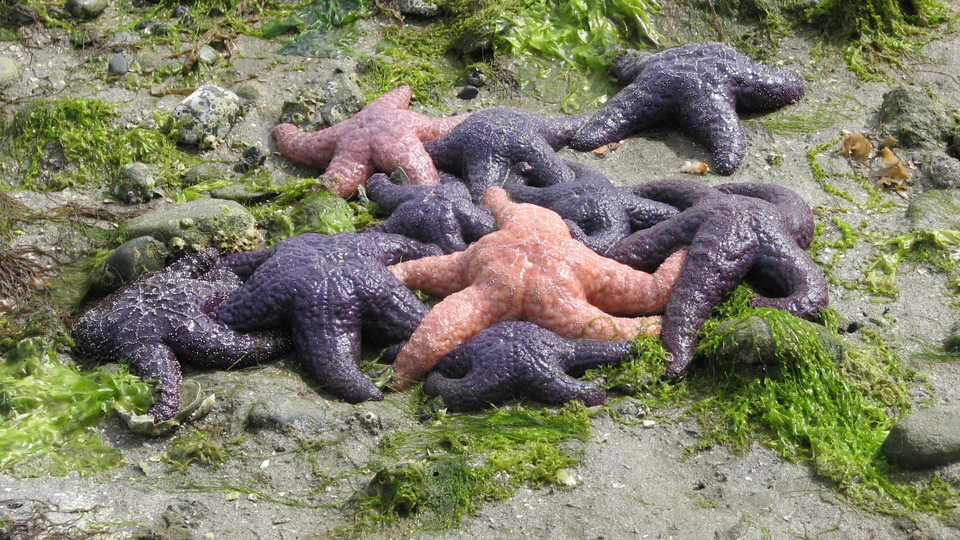 “Starfish are the gateway invertebrate,” the Academy’s Rebecca Johnson once told me, and she should know. As a marine biologist and citizen science coordinator, Johnson understands what engages people with ocean life. And starfish are more than just a gateway for humans. They are also an important keystone species, vital to the health of an ecosystem, keeping other species in balance.

When starfish, or sea stars, began dying-off three years ago along the west coast, from Baja California to Alaska, Johnson was one of the scientists on the front lines, witnessing this sea star wasting disease first hand. “We had heard the reports from the subtidal surveys in Vancouver and Washington that started circulating over the summer of 2013,” she says. “As soon as we could, Alison Young and I went out and did a whole reef search and were shocked to basically see no stars at all. We then organized our volunteers to do a whole reef search and re-surveyed some of our permanent plots. We saw 95 percent declines in starfish numbers in most of our plots. I also started our iNaturalist project then to track the wasting and also where people were seeing healthy stars.”

In fall of 2014, Johnson, Young, and their army of citizen scientists began to see some signs of hope that the sea star population was on the rebound. “We have seen an uptick in numbers, first small stars, most likely juveniles in 2014, and now a mixture of juveniles, medium-sized, and larger stars,” she explains. “I haven't run the numbers, but I would say we see about 50 to 60 percent as many ochre stars (Pisaster ochraceus) as we used to. We have yet to see any Pisaster brevispinus or Pycnopodia helianthoies return. Those two species were especially hard hit. There are also big decreases in the numbers of six rayed stars—Leptasterias.”

Scientists in Oregon, reporting last month in PLoS ONE, share similar findings, both in the overall losses of ochre stars and the resurgence of those juveniles. Around the same time as the initial starfish rebound, a group of scientists determined that a virus known as densovirus caused the disease, and using museum collections, like those here at the Academy, the scientists also determined that densovirus has been dormant in starfish for decades. So why did it cause so many problems in 2013? We interviewed Academy microbiology expert and Chief of Science Shannon Bennett about this when the findings came out. “This is indeed a puzzle,” she said in 2014. “New research is showing that some viruses may be present at low levels in their hosts but not cause disease until there is stress on the system. The authors suggest that some kind of environmental change may have occurred that has either increased animal susceptibility or enhanced transmission of the virus.” Warmer waters were one of the factors to blame at the time, but the recent PLoS paper found no such correlation. “I know a lot of people, especially Ian Hewson and his lab at Cornell [the team that found the densovirus] are working on this question,” says Johnson. “I don't really know. It seems like although the wasting is very widespread, the timing and conditions that lead to its virulence are not the same. We put temperature loggers out at our sites to see if we can get a handle on temperature changes at a fine scale. So maybe if we see something strange in the future or as we track the recovery, we will have more data.”

The effects of these large scale die-offs on such an important species are felt up and down the coast. The Oregon team is seeing an uptick of mussels, and Johnson and her colleagues have seen more barnacles at their sites. But perhaps the most dramatic changes have been reported from the Sonoma and Mendocino coasts where there has been a huge decline of kelp, causing a ripple effect throughout the ecosystem, with starved abalones washing ashore. The California Department of Fish and Wildlife reports that one of the causes is sea star wasting disease. With fewer starfish, the urchin population bloomed, decimating all of the kelp.

With the community of professional and citizen scientists here and the Oregon scientific team witnessing the effects of sea star wasting disease first-hand, we’re able to compare changes like these in ecosystems with data collected before sea star wasting disease had even emerged. “Things like this really highlight the need for long-term study and lots of eyes on the ground,” Johnson says. “We need to keep track of what things look like now so we have data to understand changes that we don't even expect and couldn't possibly predict. This is why I love and believe in the power of citizen science. We are working to build and cultivate a group of knowledgeable stewards who know a place really well and share their knowledge. In my opinion, this is the way forward. The only way to collect the data we need to save biodiversity and the only way to build a community that cares and fights for its survival.”