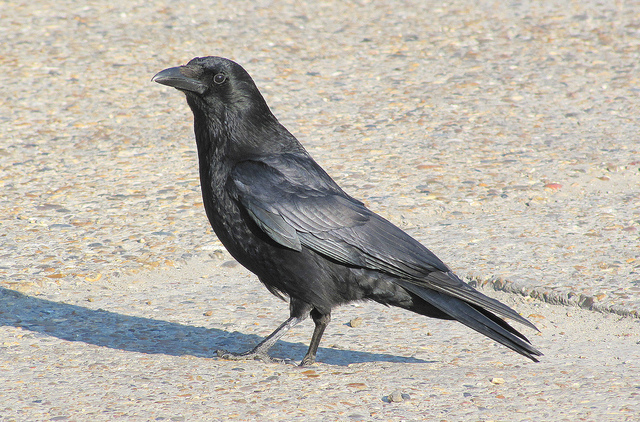 Can birds read? While a new study provides evidence of avian intelligence, no, our feathered friends aren’t literate (as far as we know).

Canadian researchers, working in France, have found that birds foraging on roads and highways vary the amount of time they take to leave the asphalt when they see a car approaching. And it appears to depend on the posted speed limit.

During Pierre Legagneux’s commute he noticed that birds let him drive closer if he was traveling on a slower road. Using a modern, hi-tech tool—a stopwatch—the scientist monitored the birds’ “flight initiation distances” (FIDs) from the safety of his speeding car.

“FID is basically the distance that the car is from the bird when the bird takes off,” explains Academy bird expert Jack Dumbacher. “When a car is moving slowly, the bird can wait until the car gets pretty close, but when the car is moving fast, it has to begin taking off when the car is still very far away—just to make sure that it can avoid being hit. He was able to measure this pretty easily on his commute by multiplying his speed by the time it took to reach the bird.”

And what he found was astonishing! His actual speed had nothing to do with the FID. But the posted speed limit did. The birds’ FID was consistently farther away for faster roads. For roads with a 20 kilometers per hour posted sign, the birds’ FID was 10 meters; 90km/hour signs, 25 meters; and 110km/hour, 75 meters.

“The authors aren’t exactly sure how the birds know, but it appears to have more to do with the AREA than with the oncoming car,” Dumbacher says. “The birds are not assessing the speed of the car, but what speed they THINK the car OUGHT to be going in that area.  And thus, the best predictor in the models was the actual posted speed limit.

“The method is simple and elegant—and something that he was able to do while commuting and paying attention to traffic. (Apparently there aren’t laws against operating a stopwatch while driving in Europe.),” Dumbacher continues.  “All he had to do was jot down 1) his speed, 2) the speed limit, and 3) the time it took to reach the spot where the bird took off.  From his citations, it looks like something like this has been studied before, but this is a cool and interesting article—something that a high school student could do for her science fair project (if she were old enough to drive...).”

The research is published in Biology Letters.