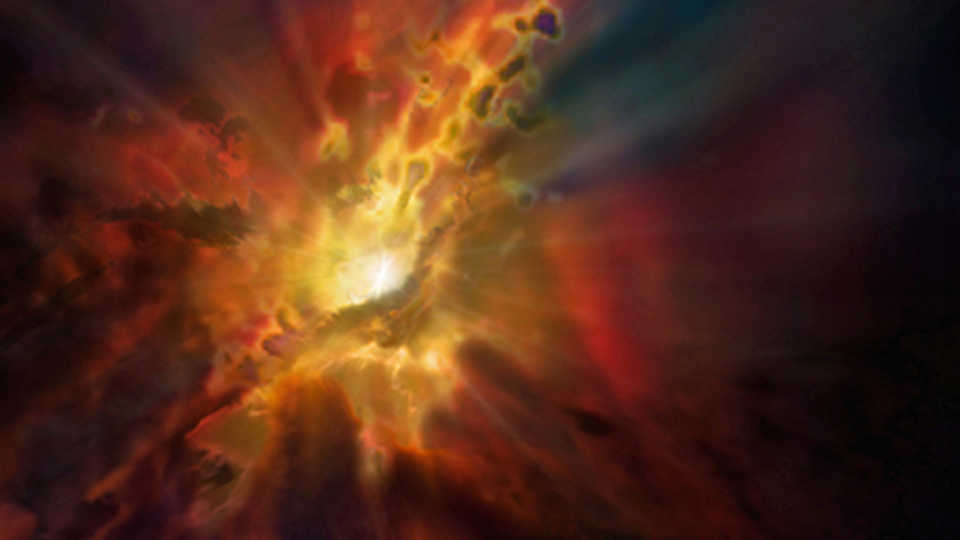 The Case of the Purloined Planet

Did the Sun pick another star’s pocket? A hypothetical world proposed in January 2016 by CalTech’s Konstantin Batygin and Michael Brown hasn’t even been found yet, but some astronomers are already saying that it might originally have belonged to another star and was stolen by the Sun.

Planet Nine, a hypothetical super-Earth we reported on in January was posited as an explanation for the curiously-oriented orbits of six Kuiper Belt objects, with the long axes of their highly-elliptical orbits tending toward the same general direction. The probability of this orbital orientation occurring without gravitational influence from a massive, as-yet-undiscovered object is estimated to be about seven-thousandths of one percent. Using computer models, Batygin and Brown proposed the existence of a giant world about ten times the mass of Earth with an orbit around the Sun that takes it from as close as 40 billion kilometers (24 billion miles) to as far as 140 billion kilometers (87 billion miles away) that seemed to be a good fit.

That orbit—far beyond the orbit of Neptune—is so large that another team of astronomers at Lund University in Sweden (Mustill, Raymond, and Davies) asks in the April 26 issue of Monthly Notices Letters of the Royal Astronomical Society if Planet Nine might actually have originated around another star that was a member of the same birth-cluster as the Sun, then got snatched away when the two had a close encounter about 4.5 billion years ago.

According to lead author Alexander Mustill, “Planet Nine may very well have been ‘shoved’ by other planets, and when it ended up in an orbit that was too wide around its own star, our Sun may have taken the opportunity to steal and capture Planet Nine from its original star. When the Sun later departed from the stellar cluster in which it was born, Planet Nine was stuck in an orbit around the Sun.”

Although the Lund group’s computer modeling suggests that such a planetary plundering might be possible, others disagree, supported by their own models. In another study, Gongjie Li of the Harvard-Smithsonian Center for Astrophysics and Fred Adams of the University of Michigan at Ann Arbor suggests that the chances of producing the proposed orbit of Planet Nine from a planetary theft are low—less than about one percent.

Still, if confirmed, it would be a very interesting development. As Mustill says, “It is almost ironic that while astronomers often find exoplanets hundreds of light years away in other solar systems, there's probably one hiding in our own backyard." –Bing Quock

The persistence of 22-year-old Michelle Kunimoto, who just graduated from the University of British Columbia with a Bachelor’s Degree in astronomy, may have resulted in the discovery of four new extrasolar planets. However, they won’t officially be designated exoplanets until they are independently confirmed.

Scouring data from the Kepler spacecraft’s list of candidate objects, or Kepler Objects of Interest (KOIs), Kunimoto found that one is about the size of Mercury, two are Earth-sized, and the fourth is slightly larger than Neptune. That last object—designated KOI 408.05—is the most interesting, being located in the habitable zone of its star, which is 3,200 light years away and already known to possess four confirmed exoplanets. The possible fifth planet orbits with a Mars-like period of 637 days, and that explains how it was overlooked by NASA.

The transit detection method used by Kepler looks for dips in the amount of light we see from a star as an orbiting planet moves between the star and Earth, blocking part of the star from view. This method is biased toward objects with shorter orbital periods—to establish that a transit is caused by an orbiting planet rather than some other phenomenon, astronomers would like to observe at least three transits. From the one model that we’re familiar with, an Earthlike planet should take about the same amount of time that Earth does to orbit its star, so three transits would be expected to occur regularly over roughly three years. Kepler’s planet-hunting data were collected over a four-year period from 2009–13, time enough astronomers who now analyzing the information to detect only two orbit cycles of KOI 408.05. Of the nearly 5,000 planets and planet candidates detected by Kepler, only 20 have orbits longer than that of KOI 408.05.

Although its orbital period is longer, indicating an orbital distance more like that of Mars than that of Earth, the planet is still thought to reside within the habitable zone of its star. Dubbing it a “warm Neptune,” Kunimoto and her team (which includes her professor, Jaymie Matthews, who is also a member of Kepler’s advisory team) postulate that, like the giant planets of our solar system, KOI 408.05 may also have a large family of moons whose possibly-rocky surfaces could potentially provide a hospitable environment for life.

On Target for Gravitational Wave Detector

In February, we reported on the first detection of gravitational waves by the ground-based Laser Interferometer Gravitational-Wave Observatory (LIGO), a full century after Albert Einstein predicted their existence. This week, scientists from the European Space Agency (ESA) reported that we’re one step closer to detecting more of these small ripples in space and time, with successful results from the LISA Pathfinder mission.

LISA Pathfinder was launched in December 2015 and reached its operational orbit roughly 1.5 million kilometers (930,000 miles) from Earth in the direction of the Sun about two months later. The goal of the mission is to place two test masses in freefall, with the observatory monitoring their relative positions as they move under the effect of gravity alone. While LIGO can measure gravitational wave signals in frequencies from 10 Hertz (cycles per second) to several thousand Hertz, LISA Pathfinder can measure much lower frequencies, from 0.1 milli-Hertz to one Hertz, and without interference from seismic, thermal, and terrestrial gravity noises on Earth.

And the first measurements are a success! “We can determine the distance of the two free falling test masses to less than the diameter of a single atom,” says Gerhard Heinzel, of the Albert Einstein Institute and Leibniz Universität Hannover. With this achievement, ESA will move forward with plans to develop a much pricier, large space observatory capable of detecting gravitational waves emanating from a wide range of exotic objects in the Universe. –Molly Michelson

A team of scientists using the Atacama Large Millimeter/submillimeter Array (ALMA) in Chile have observed three clouds of cold, clumpy gas streaming toward a black hole at the center of a massive cluster of about 50 galaxies called Abell 2597 (over one billion light years from Earth), providing the first direct evidence that black holes feed on clouds of cold gas. The findings were published this week in Nature.

“Although it has been a major theoretical prediction in recent years, this is one of the first unambiguous pieces of observational evidence for a chaotic, cold rain feeding a supermassive black hole,” says Grant Tremblay of Yale University. “It's exciting to think we might actually be observing this galaxy-spanning rainstorm feeding a black hole whose mass is about 300 million times that of the Sun.”

The three large clouds, each potentially as massive as a million Suns and up to 10 light years across, are falling towards the black hole at nearly 355 kilometers per second (800,000 miles per hour) and are only about 300 light years from falling in. It is unknown however, whether not not all of the material will be consumed. Previously, it had been though black holes fed off of steady streams of hot, ionized gas.

“The simple model of black hole accretion consists of a black hole surrounded by a sphere of hot gas, and that gas accretes smoothly onto the black hole, and everything’s simple, mathematically,” says Michael McDonald of MIT. “But this is the most compelling evidence that this process is not smooth, simple, and clean, but actually quite chaotic and clumpy.”

The observations suggest that a black hole’s accretion (or fueling) process may be much messier than originally thought. Rather than a steady, uniform meal, black holes may slowly graze on a steady diet of diffuse hot gas, but then occasionally consume clumps of cold gas that come nearby.

“This diffuse, hot gas is available to the black hole at a low level all the time, and you can have a steady trickle of it going in,” McDonald says. “Every now and then, you can have a rainstorm with all these droplets of cold gas, and for a short amount of time, the black hole’s eating very quickly. So the idea that there are these two dinner modes for black holes is a pretty nice result.”

Researchers are planning to use ALMA to search for similar cold gas clumps as black hole fodder in other galaxies to determine if such phenomena is common. –Elise Ricard