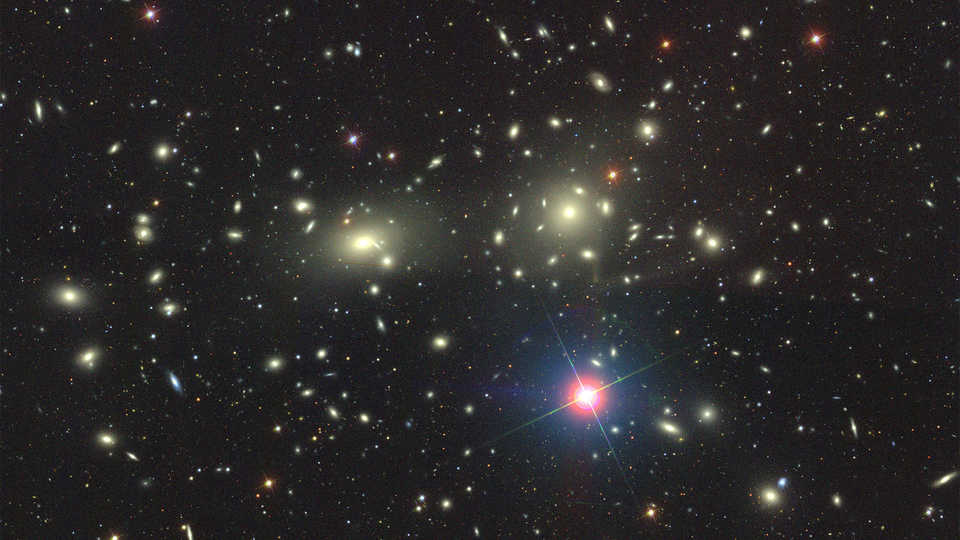 With the planet Mars recently at opposition, stargazers currently have an excellent opportunity to observe and appreciate the Red Planet. It’s at these times—when Earth and Mars are closest—that features can be seen much more clearly, including dark, rocky patches and the bright polar ice caps. As a result, well-equipped amateur astronomers can produce detailed images that may rival those that come from professionals. During the opposition of 2012, astronomers saw unusual, cloudlike phenomena that were estimated to be at an altitude of 250 kilometers (155 miles), where no clouds had been seen before. These anomalous features developed over several hours and persisted for more than a week, baffling astronomers who suggested everything from asteroid impacts to volcanism to auroras.

A possible explanation for these clouds involves a recent analysis of data from the European Space Agency’s Mars Express, which has been orbiting the Red Planet since 2003. Among its instruments is one that studies solar particle interactions resulting from coronal mass ejections (CMEs)—violent eruptions of charged particles and radiation from active areas on the Sun’s surface. CMEs can affect Earth by interfering with radio communications, damaging delicate electronics, causing power blackouts, and—most benevolently—creating auroras in our atmosphere. The sightings of the mysterious martian clouds in 2012 coincided with CMEs, and a similar cloud was observed in 1997 by the Hubble Space Telescope, coincident with yet another CME. However, these clouds are far brighter than any known auroras seen on Mars, so auroras may not be the easy answer.

According to David Andrews of the Swedish Institute of Space Physics and the lead author of the paper reporting the analysis in the Journal of Geophysical Research, “The jury is still out as to what physics is at play here, but given the altitude of the plume, we think that plasma interactions must be important. One idea is that a fast-travelling CME causes a significant perturbation in the ionosphere resulting in dust and ice grains residing at high altitudes in the upper atmosphere being pushed around by the ionospheric plasma and magnetic fields, and then lofted to even higher altitudes by electrical charging. This could lead to a plume effect that is significant enough to be detected from Earth by astronomers.”

Wisely eschewing a wild guess at a causal connection, he adds, “At best, all we can say is there is an interesting correlation between two rather extreme events.”

While the effects of space weather on Mars are intriguing, much more is known about space weather affecting Earth, and in a paper published in Nature Geoscience on May 23, a team of NASA researchers led by solar scientist Vladimir Airapetian of the Goddard Spaceflight Center suggests that life on our planet may owe its existence to the antics of a rowdy young Sun four billion years ago. Although the Sun at 1.5 billion years old was only about three-quarters as energetic as it is today, it may nevertheless have experienced a turbulent youth, with violent “superflares” erupting on its surface. Although rare in modern times (luckily), superflares may have occurred so frequently billions of years ago that they provided enough energy to warm what otherwise would’ve been a cold ball of ice 150 million kilometers (93 million miles) away. The probability of superflares on the young Sun is based on observations of young, sunlike stars by NASA’s planet-seeking Kepler spacecraft, which discovered adolescent stars producing as many as ten superflares per day, compared to perhaps one per millennium that might occur on the Sun nowadays.

With a still-developing magnetic field weaker than at present, Earth was not as well-shielded from the particles and radiation emitted by the superflares. These, according to Airapetian’s group, would have interacted more readily with nitrogen and carbon dioxide in the atmosphere, producing nitrous oxide, a greenhouse gas 300 times more potent than carbon dioxide. The Goddard team calculated that if the amount of nitrous oxide in the atmosphere were as little as one percent that of carbon dioxide, that would’ve been enough to warm the planet enough for liquid water to exist.

In addition, the energy pouring through the magnetic field may have been the spark that kickstarted the process that got life started on Earth, as demonstrated by Stanley Miller and Harold Urey in their groundbreaking 1952 experiment. The recipe was simple: combine water, methane, ammonia, and hydrogen (constituents of Earth’s early atmosphere), zap with energy (in their experiment, electricity), and—presto!—amino acids were formed. Could the radiation from a superflare produce the same result?

On the other hand, too many superflares—and too much energy—would be lethal. Although a planet’s distance from its star must be within the habitable or “Goldilocks” zone, it’s a bit more complex than that. The effect of space weather, combined with other factors, also has to be “just right.” –Bing Quock

Heading to Mars on Plasma Rockets

How will humans travel to Mars? Make sure our rocket “doesn’t break,” says UCLA grad student Gary Li. “You can't have your rocket breaking on you halfway to Mars, there aren't any space tow companies as far as I know.” Li was one of the participants in the UC Grad Slam last month, and his three-minute presentation, “Traveling to Mars with immortal plasma rockets,” won third place.

“I originally became interested in plasma rocket technology because it sounded like something out of science fiction,” Li explains. “Who wouldn't want to work on technology that looked like it came straight out of Star Trek?”

Plasma rocket technology could be how we transport humans—and their stuff—long distances in space in the future. “Plasma rockets, formally known as ‘electric propulsion,’ have an amazing fuel efficiency compared to traditional chemical rockets. By switching to plasma rockets, a spacecraft going to Mars would only need one-tenth of the fuel needed by chemical rockets,” he says. Without all of the fuel, there would be more room to bring necessities. “We can bring more useful things such as food and materials for building martian houses for the astronauts.”

Currently, the power required to get a plasma rocket to Mars quickly is an obstacle, Li says, as is the thruster (another term for rocket), which Li’s work is trying to solve. “The plasma tends to damage the walls of the thruster, eventually causing the thruster to break.” His idea? Plasma re-deposition.

“The fundamental idea is that the piece of the wall that breaks off can somehow ‘re-deposit’ back onto the wall, repairing itself,” he explains. “There are two scenarios under which this can happen: one, the wall material contains microstructures, such as microscopic pillars protruding from the surface, whereby wall particles that break-off fly towards the pillar and stick there. And two, the wall particle flies into the plasma and is ionized (becomes positively charged), and is subsequently attracted back to the wall by electric forces. Both scenarios are explored by experimenting with different microstructured materials and plasma conditions for the plasma re-deposition effects to be maximized.”

This summer, Li will be studying a concept plasma rocket with the Air Force, returning to Los Angeles in the fall to continue his re-deposition experiments. But he won’t be spending his Grad Slam winnings any time soon. “I'll probably save it for my future trip to space.” –Molly Michelson

The discovery of a massive young protocluster of galaxies 12 billion light years away in the constellation Bootes was reported this week in the Astrophysical Journal. The Mayall telescope at Kitt Peak National Observatory in Arizona and the Keck II Telescope at W. M. Keck Observatory on Mauna Kea provided the data that led astronomers identifying the protocluster.

Not only is it big, it is the most voluminous structure known at an incredible distance of about 12 billion light years away, meaning that we are seeing this structure as it was 12 billion years ago, when the Universe was only 1.8 billion years old (that’s a mere 12 percent of its current age).

Protoclusters are precursors to giant galaxy clusters that we see closer to us (in both time and space). “The protocluster will very likely grow into a massive cluster of galaxies like the Coma cluster,” says Kyoung-Soo Lee of Purdue University.

Young, massive structures like this are extremely rare, not just to find but also in simulations of the cosmos (in other words, when we plug the laws of physics into a computer and replicate the history of the Universe, few such protoclusters show up in the simulations). Additionally, the formation and early history of massive galaxy clusters is not well understood. So, “the discovery and confirmation of one distant and massive protocluster is very exciting,” says Naveen Reddy of UC Riverside, “but it is important to find a large sample of these so we can understand the possibly varied formation history of the population as a whole.” –Elise Ricard