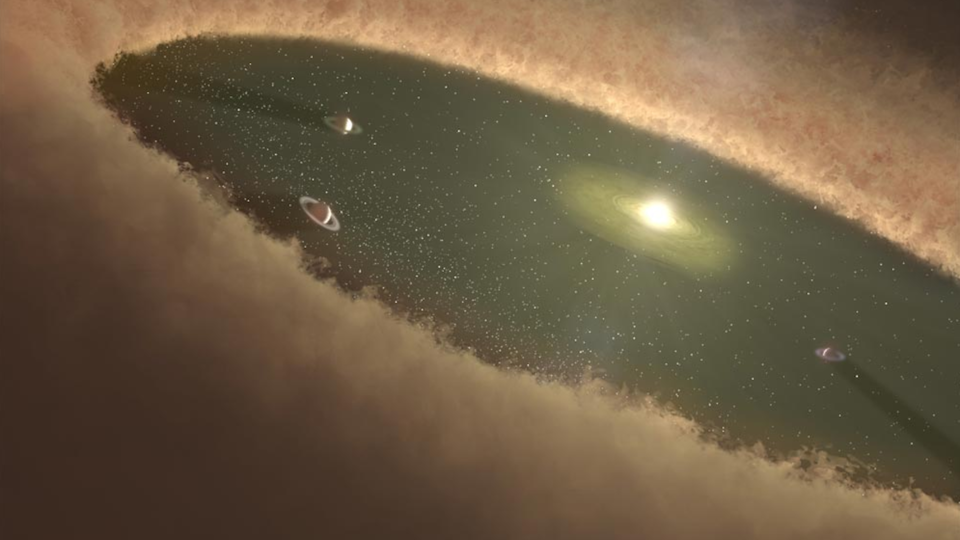 Comet Catalina—Coming to a Sky Near You

Now just past its closest approach to the Sun, Comet C/2013 US10 Catalina is entering the northern sky and is climbing into the predawn sky. Over the coming month, its highly-inclined orbit will take it north of the plane of the solar system, where skywatchers may be able to follow it, appearing as a fuzzy blob as it moves through the stars of the constellations Virgo the Maiden and Bootes the Herdsman through the end of 2015 and into January 2016, passing the bright star Arcturus on New Year’s Day.

First thought to be an asteroid when it was discovered in 2013 by the University of Arizona’s Catalina Sky Survey, the object was designated US10, but further observations helped refine its orbital characteristics, and astronomers have established that it as it swung around the Sun, making its closest approach on November 15, it attained escape velocity—the speed at which it will be able to escape the Sun’s gravitational pull. This will result in its being ejected from the solar system, making this appearance our first and only opportunity to observe this frozen visitor from deep space.

Although some astronomers have forecast that the comet’s brightness may peak in late November, becoming visible to the naked eye, no one is certain as to how bright it will become, and observers would be wise to keep in mind the wisdom of famed comet-hunter David Levy, who has discovered a total of 22 comets: “Comets are like cats. They have tails, and they do precisely what they want.” –Bing Quock

The south pole of Saturn’s moon Titan is just entering winter, and it’s a harsh beginning to the very cold season. NASA scientists estimate that temperatures there likely reach a bone-chilling -238° Fahrenheit (–150° Celsius). And while earthlings may think winter seems to last forever here on our planet, each season on Titan lasts about seven-and-a-half Earth years, so spring is a long way away for the south pole.

Scientists started observing seasonal changes on Titan when the Cassini spacecraft first arrived at Saturn in 2004. At the time, it was mid-winter at Titan’s north pole (and summer in the south). Cassini’s camera and infrared instrument (CIRS) have been tracking seasonal ice clouds disappearing in the north pole and forming in the south pole of the moon ever since.

The size, altitude, and composition of these polar ice clouds help scientists understand the nature and severity of Titan’s winter. CIRS data shows that the ice particles in the clouds are made up of a variety of compounds containing hydrogen, carbon and nitrogen, and that they were weaker in the north pole than they currently are in the south. A new detection, announced last week at 47th Meeting of the American Astronomical Society (AAS) Division for Planetary Sciences (DPS), has found a massive ice cloud system in the south which supports the idea that the onset of winter is much harsher than the end.

“When we looked at the infrared data, this ice cloud stood out like nothing we’ve ever seen before,” says Carrie Anderson of NASA’s Goddard Space Flight Center. “It practically smacked us in the face.”

“The opportunity to see the early stages of winter on Titan is very exciting,” says Robert Samuelson, a Goddard researcher working with Anderson. “Everything we are finding at the south pole tells us that the onset of southern winter is much more severe than the late stages of Titan's northern winter.”

Cassini will continue to observe the seasonal changes on Titan and its south pole until the mission’s end in 2017. –Molly Michelson

The first direct image of a forming planet was published this week in Nature.

The star, LkCa 15, is approximately 450 light-years away in the constellation Taurus. Orbiting the young Sun-like star is a large debris disk, leftover material from the star’s formation called a protoplanetary disk. According to current understanding, planets form by gathering this leftover material, drawing it into the proto-planet rather than staying in the disk or falling into the star. Eventually, this clears a lane in the disk where the planet can orbit unobstructed. LKCa 15 is a three planet system and researchers were able to hone in on one of the clear sections and capture an image of the planet LkCa 15b still in the process of forming.

Studying planetary formation poses many challenges. The planets of our solar system, including Earth, are are well past the formation stage, and until 20 years ago, we hadn't even detected a single planet outside our solar system for comparison. Now, we know of nearly 2,000 exoplanets, all of varying ages and in different stages in their life, but to date only about 10 have been directly imaged, all fully formed.

The young proto-exoplanet was first detected in 2011 (when the discovery was also touted as “the first direct image of a planet in the process of forming,” hmmm). Coincidently, the two lead authors of the latest publication, Steph Sallum of University of Arizona and Kate Folletteof Stanford, began studying the same star for their own PhD projects just a few months ago. Sallum’s research used the Large BInocular Telescope (LBT) in Arizona while Follette used the University of Arizona’s Magellan Telescope and its Adaptive Optics System, MagAO, in Chile.

Capturing sharp images of distant objects from Earth is very difficult, mostly due to atmospheric turbulence—the mixing of hot and cold air which also causes stars to appear to twinkle. Imaging a distant planet, as opposed to a star, is even more challenging.

“The difference in brightness between a star and a young exoplanet is usually comparable to the difference between a firefly and a lighthouse,” says Follette. “It’s very hard to isolate the light from the planet when it is so faint and so close to the star from our point of view. But, because we could focus on a special color of light where the planet is glowing very brightly, the signal was significantly stronger than what we normally look for.”

These considerations make the find a big step forward not just in our understanding of planetary formation, but also our ability to directly image distant celestial objects. –Elise Ricard

In the shorthand of exoplanetary discoveries, “Earth-like” often shows up as a synonym for “habitable.” But that appears not to be the case for the object breathlessly described as the “most Earth-like planet ever discovered” when its discovery was announced less than a year ago.

A lot of things go into the estimation of a planet’s habitability, and Kepler-438b boasts the highest estimated Earth Similarity Index, a number calculated to estimate the “Earth-likeness for solar and extrasolar planets.” The calculation compares a planet’s estimated radius, density, escape velocity, and surface temperature to those of Earth. All well and good, but other factors can affect how habitable a planet might be…

It turns out that Kepler-438b’s parent star (Kepler-438, unsurprisingly enough) emits high-energy superflares every few hundred days. About ten times as powerful as anything we’ve ever seen on the Sun (and equivalent to about 100 billion megatons of TNT), the coronal mass ejections (CMEs) that likely accompany such events could wipe out life on the most Earth-like of planets!

We can still hold out a sliver of hope, according to David Armstrong of the University of Warwick, whose team announced the bad news on Wednesday. “If the planet, Kepler-438b, has a magnetic field like the Earth, it may be shielded from some of the effects. However, if it does not, or the flares are strong enough, it could have lost its atmosphere, be irradiated by extra dangerous radiation, and be a much harsher place for life to exist.”

Not great news in the hunt for Earth 2.0, but a worthwhile reminder that habitability is a tricky thing. –Ryan Wyatt