Have You Heard About the Pirate Planet?

Sorry, just kidding. Actually, it's called 2015 RR245, because the discovery image was taken in 2015 by astronomers using the Canada-France-Hawaii Telescope as part of the Outer Solar System Origins Survey (OSSOS). The object itself wasn't noticed in the image until 2016 by J.J. Kavelaars, of the National Research Council of Canada. Quickly described as a dwarf planet, this is not the hypothetical Planet Nine that Konstantin Batygin and Mike Brown of Caltech proposed in January—it’s too small for that, with a diameter estimated at 700 kilometers (435 miles). That makes 2015 RR245 smaller than Ceres, which at 950 kilometers (590 miles) across is currently recognized as the “dwarfiest” of the five officially-recognized dwarf planets. In contrast, the other dwarf planets—Eris, Haumea, Makemake, and Pluto—are at least several times its diameter, and the hypothetical Planet Nine is expected to be a super-Earth, with about ten times the mass and two to four times the diameter of our homeworld.

For now, 2015 RR245’s orbit around the Sun is estimated to take about 700 years, bringing it from a close point of 34 au (short for “astronomical units,” one of which is equivalent to the average Earth-Sun distance, so the closest point lies 34 times as far from the Sun as Earth) to about 120 au (120 times as far) at its farthest. It is currently inward bound and expected to reach its nearest point to the Sun around 2096, by which time astronomers should have far more advanced technologies available to observe distant bodies.

As for its name, the discovering team has the privilege of submitting a proposal to the International Astronomical Union after several years’ of further observations so that its orbit is better understood. Following official naming conventions for solar system objects, its formal name should have absolutely nothing to do with pirates. –Bing Quock

The coldest known object outside of our solar system now offers the first evidence of the existence of clouds of water or water ice outside of our home base, according to a UC Santa Cruz study. The object? A brown dwarf known as WISE 0855, about 7.2 light years away from Earth.

Brown dwarfs form the way stars do, through the gravitational collapse of a cloud of gas and dust, but without gaining enough mass to spark the thermonuclear fusion that makes stars shine. At about five times the mass of Jupiter, WISE 0855 more closely resembles the gas giant than our star—its temperature is about 250 kelvins (–10°F), making it nearly as cold as Jupiter, which is merely 130 kelvins (–225°F).

Given that temperature, astronomers conducted an active search for water clouds, says lead author Andrew Skemer. “We would expect an object that cold to have water clouds, and this is the best evidence that it does.” Previous observations of the brown dwarf,publishedin 2014, provided tentative indications of water clouds based on very limited photometric data. But Skemer, a co-author of the earlier paper, knew that obtaining a spectrum (which separates the light from an object into its component wavelengths) would be the only way to detect the object's molecular composition.

Using the Gemini North telescope in Hawaii, Skemer and his colleagues obtained an infrared spectrum of the failed star, which provided the first details of the brown dwarf’s composition and chemistry. “It’s five times fainter than any other object detected with ground-based spectroscopy at this wavelength,” Skemer said. “Now that we have a spectrum, we can really start thinking about what's going on in this object. Our spectrum shows that WISE 0855 is dominated by water vapor and clouds, with an overall appearance that is strikingly similar to Jupiter.”

The one difference between our gas giant and the brown dwarf? Phosphine. Phosphine forms in the hot interior of the planet and reacts to form other compounds in the cooler outer atmosphere, so its appearance in the spectrum is evidence of turbulent mixing in Jupiter’s atmosphere. The absence of a strong phosphine signal in the spectrum of WISE 0855 implies that it has a less turbulent atmosphere.

The study is published in Astrophysical Journal Letters. –Molly Michelson

Astronomers have caught the very first glimpse of a frost line in the protoplanetary disk of a young star. The observations of V883 Orionis, 1,350 light-years from Earth in the Orion Nebula Cluster, were made using the Atacama Large Millimeter/submillimeter Array (ALMA), and the findings were published this week in Nature.

The frost line, also referred to as the iceline or snowline, is the region around a young star where the temperature is cold enough for water (and other volatile compounds such as carbon dioxide, methane, and ammonia) to condense into solid ice grains.

Around young Sun-like stars, this line is typically found about three au from the star. In our solar system, the frost line lies in between Mars and Jupiter. However, observations of V883 Orionis revealed that a sudden, powerful increase in the brightness of the young star pushed its frost line out to approximately 40 au, or roughly the radius of Pluto’s orbit in our solar system. It is thought that outbursts like this are common during stellar evolution, so as a young star evolves, the frost line does not remain a fixed point, but actually moves inward over time.

Why does this matter? Planets, asteroids, comets, and other objects all form from the debris disk of material leftover from a star forming. Depending on the distance from the star within the protoplanetary disk, different materials condense. Within the frost line water vaporizes, and the conditions likely favor the formation of smaller, rocky planets such as Mars and Earth. Beyond it, all of that ice allows for the rapid formation of ice balls and comet-like bodies, which facilitate the formation of massive gaseous planets such as Jupiter. Understanding frost lines and how they are influenced by the evolution of their star gives insight into the formation of planetary systems.

“The distribution of water ice around a young star is fundamental to planet formation and even the development of life on Earth,” explains Zhaohuan Zhu of Princeton University. “ALMA’s observation sheds important light on how and where this happens in protoplanetary disks when young planets are still forming.” –Elise Ricard

Exoplanets with More Than One Sun

Last week’s announcements, both online and in Science, of the discovery of a planet orbiting within a triple-star system in the constellation Centaurus the Centaur was met with a great deal of excitement for several reasons, one of which being that—as implied by research team lead Kevin Wagner of the University of Arizona—it shouldn’t exist.

Although other planets in triple-star systems are known, this one is different. The planet, known as HD 131399Ab, is about four times the mass of Jupiter and circles its star (relatively) closely, at about twice the distance of Pluto from the Sun. A pair of smaller stars orbits much farther out, twirling about their common center of gravity. For half of its 550-year long orbit, the planet’s three suns are in its sky. Then, when the single star and the pair are at opposition, one rising as the other sets, the surface experiences constant sunlight.

Astronomers say that the planet is under the gravitational influence of all three stars, which is an inherently unstable situation, and they don’t know how long its orbit will remain stable. That determination will have to wait for further observations that will help define the orbit more precisely. “I’d venture to say this is the weirdest orbit of any exoplanet we’ve ever found,” said Wagner. “We know of no other planet in a configuration like this.”

Scientists are also excited by the fact that they’ve been able to image the planet, using the European Southern Observatory’s Very Large Telescope in Chile. Despite the fact that more than 3,000 exoplanets are known, direct images of them are few and far between, and although other methods of detection have produced convincing evidence of these other worlds’ presence, there’s something reassuring about actually being able to see them.

It was once thought that the competing gravitational pulls within a multiple star system would wreak havoc with planetary orbits, making their existence short-lived if not altogether unlikely. The key to orbital stability, as explained by R. S. Harrington at the 1979 conference on Life in the Universe at Ames Research Center in California, is that in the case of a binary system, the planet(s) must orbit very close to one star or very far away from and circling both, thus evading any gravitational tug-of-war between them. Orbiting two stars makes a planet circumbinary, and nearly two dozen are known so far.

In addition, nearly thirty confirmed planets reside in triple-star systems, where a tight binary pair and a single star orbit widely about each other. Here, in no case does the planet circle all three stars, so none can be called “circumtrinary” (as much fun as that word is). In most instances, the planet orbits either the single star or one component of the binary pair, and in only one case so far, does it orbit both stars of the binary pair within the trinary system. See how confusing it can get? But wait, there's more.

Are there planets in systems with four stars? Amazingly, two examples have been found, and the increasing number of exoplanets in multiple star systems has astronomers rethinking what they thought they knew about solar system formation and planetary migrations.

Wagner concludes that the diversity of worlds and planetary configurations is greater than many would’ve thought possible, and that planets in multi-star systems may be just as numerous as planets in single-star systems. –Bing Quock 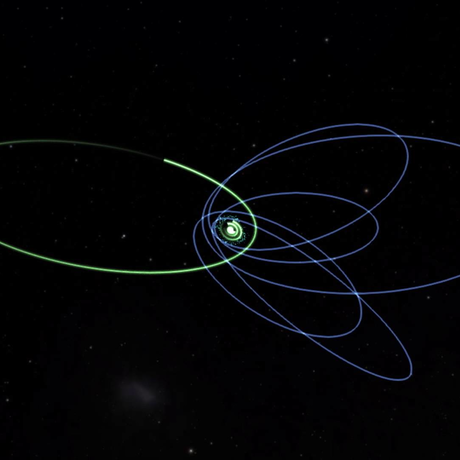 Astronomers have evidence of a ninth planet in our solar system. 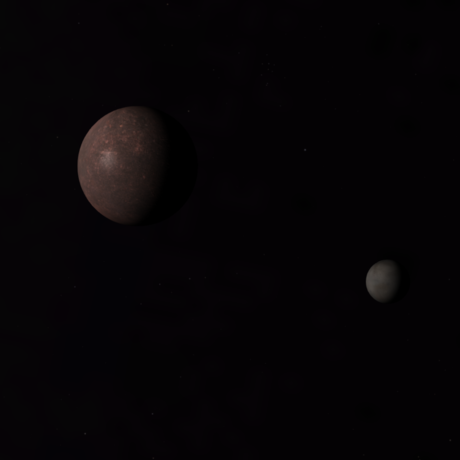 Space Friday: A Moon for Makemake, a Comet without a Tail, and Exomoons

News from Mars, a dwarf planet moon, a manx comet, and surprising, potential exomoons in the Kepler-32 system. 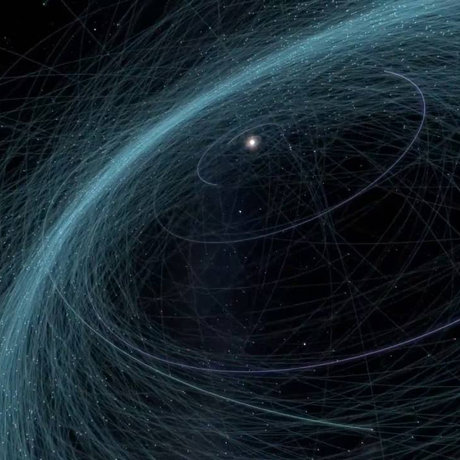 Simulations reveal that our planetary system had a violent past, when giant planets changed their orbits. 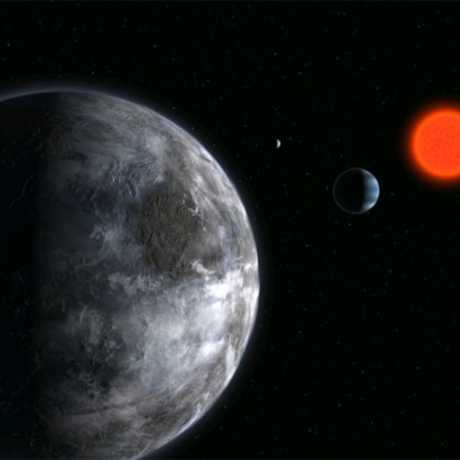 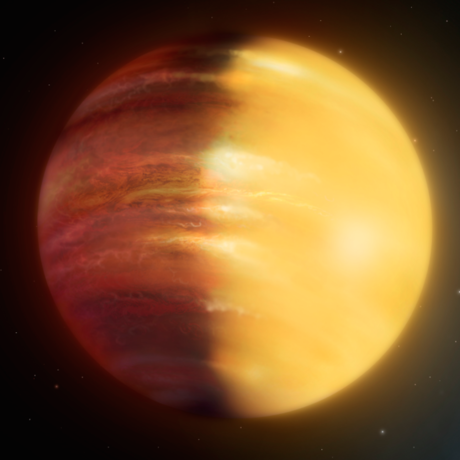 Asteroids, Juno Results, plus Rubies and Sapphires
This week's space news includes defending ourselves from asteroids and an exoplanet with a bejeweled sky.
image-standard 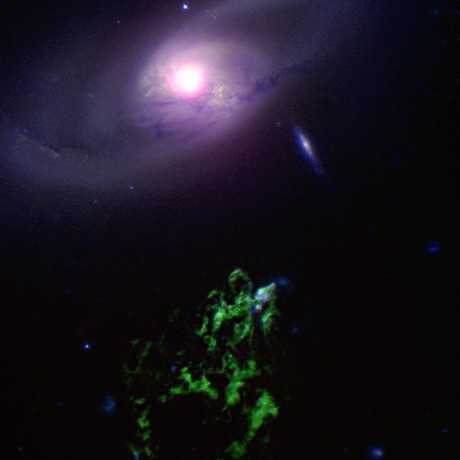