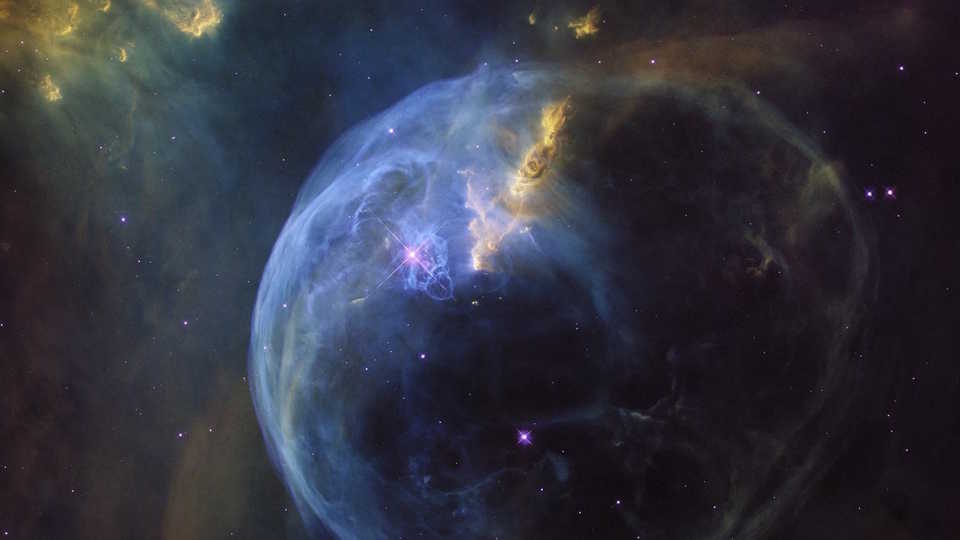 The Hubble Space Telescope turns 26 this weekend, and if you’re an orbiting observatory known for beautiful images, what better way to celebrate your birthday than to release a gorgeous new image?

The Bubble Nebula (affectionately catalogued by astronomers as NGC 7635, Sharpless 162, and Caldwell 11) has been imaged by Hubble previously, but the new birthday picture shows the entire, nearly spherical structure that earned the nebula its name (the cute one, at least, since the ones with numbers all come from catalogs). What’s blowing the bubble? Powerful stellar winds from the bright star near the center of the image.

If course, you may notice that, although the star occupies the center of the official image, it doesn’t reside at the center of the nebula itself—a fact that astronomers find puzzling, especially given the symmetry of the surrounding nebula.

The colors seen in the Hubble image aren’t actually what you’d see with your own eyes, even if you had Hubble-sized peepers. Instead, specialists translate Hubble data into colors we can interpret (resulting in imagery famously derided in one 2003 L.A. Times article as being “too good to be true”), and even when the observations occur in the spectrum observable by the human eye, the colors don’t always map into what we would see through a telescope eyepiece. In the Bubble Nebula image, for example, we’re seeing emission lines from nitrogen (in blue), hydrogen (in green), and oxygen (in blue): radiation from the hot central star causes these atoms to emit light at very specific wavelengths. But the nitrogen and hydrogen emission both occur in the red part of the spectrum (at very nearly the same wavelength) and the oxygen emission appears green to the unaided eye. Spreading these observations into more widely separated colors makes it easier for astronomers to tease out structures in the nebula (to understand what’s going on), and admittedly, it also makes for an attractive image.

Just to the right of the star in the image, you can find bright yellow cometary knots, larger in size than our own solar system but far less massive. We can only observe these structures in relatively nearby nebulae, so astronomers get excited when high-resolution images such as this birthday picture become available for close scrutiny. Which means this is much more than a pretty picture! It’s also helping us understand how these nebula evolve over time.

BTW, if you happen to run a planetarium, you can download high-resolution frames of a fulldome video exploring the Bubble Nebula… Pretty sweet! Maybe it’s because the European Southern Observatory, which runs Hubble outreach for the European Space Agency, is building a lovely new visitors center that will feature a state-of-the-art planetarium. –Ryan Wyatt

How far do some galactic cosmic rays travel? Not as far as you might think, according to a study published this week in Science. Astronomers used NASA’s Advanced Composition Explorer (ACE) spacecraft to look at some of these cosmic rays, which true to their name, originate within our galaxy, but outside of our solar system.

The team focused on several galactic cosmic rays that contain a radioactive form of iron called iron-60. Iron-60 is created inside massive stars when they explode and is then blasted into space by the shock waves from the supernova. Some iron-60 in the debris from the destroyed star is accelerated to cosmic-ray speed when another nearby massive star in the cluster explodes and its shock wave collides with the remnants of the earlier stellar explosion.

These iron-60 cosmic rays are fairly rare—ACE has detected about 300,000 galactic cosmic rays of ordinary iron, but only 15 containing iron-60—but also easier to trace. They can't travel in straight lines because their electrical charge causes them to respond to magnetic forces, forcing them along convoluted paths following the tangled magnetic fields in our galaxy. In addition, iron-60 is radioactive with a halflife of 2.6 million years, meaning over that time, half of it will self-destruct, decaying into other elements (cobalt-60 and then nickel-60). If the iron-60 cosmic rays were created hundreds of millions of years or more ago, or very far away, eventually there would be too little left for the ACE spacecraft to detect.

“The fact that we see any iron-60 at all means these cosmic ray nuclei must have been created fairly recently (within the last few million years) and that the source must be relatively nearby,” says NASA Goddard’s Eric Christian, “within about 3,000 light years, or approximately the width of the local spiral arm in our galaxy.” That may sound far away, but it’s all relative. A few thousand light years is nearby because the vast swarm of hundreds of billions of stars that make up our galaxy is about 100,000 light years wide.

Given that distance, the researchers have narrowed down the origin of these cosmic rays to several clusters of massive stars within a few thousand light years, including Upper Scorpius (with 83 stars), Upper Centaurus Lupus (134 stars), and Lower Centaurus Crux (97 stars). –Molly Michelson

As we learn more and more about planets orbiting other stars (extrasolar planets or more simply exoplanets) and compare them to our own solar system, we see evidence that these systems undergo their own process of evolution. Forming from great, spinning disks of dust and gas, planets migrate in or out, affecting other bodies in orbit about the same stars with their gravitational pulls—a process illustrated in the current Morrison Planetarium feature, Incoming!

This interaction between planets might play a major role in the story of the as-yet-unobserved “Planet Nine,” postulated by Konstantin Batygin and Michael Brown of Caltech, as mentioned here and here. Batygin and Brown suspect that a so-called “super-Earth” may orbit the Sun far outside the orbits of the other planets. A super-Earth is defined as being more massive than Earth but not as massive as Neptune (in fact, the alternative term is “mini-Neptune”). Interestingly, super-Earths have been found to be quite common among extrasolar planets, but our own solar system appears to stand out in the crowd by not having one. However, if Batygin and Brown are correct, there might be one after all. They suggest that the gravitational pull of Planet Nine is re-orienting the elliptical orbits of a number of other distant dwarf planet-like objects in a way that would be very unlikely to occur otherwise.

Then again, according to a new paper by Rebecca Martin and Mario Livio, our solar system may have had one in the past. They base this on the observation that in about half of the exoplanetary systems found, planets or debris have been detected in orbits closer than Mercury’s. Martin and Livio speculate that if a super-Earth had formed very close to the Sun, it may have swept that region clear of debris, depriving the other inner planets of material, possibly explaining the relatively small size of the terrestrial worlds Mercury, Venus, Earth, and Mars. Eventually—perhaps due to the gravitational influences of Jupiter and Saturn as they migrated in and out before finally settling into their current orbits—the super-Earth may have spiralled inward, to be consumed by our star. This sequence of events, they posit, could explain the comparative cleanliness of the intra-mercurial region as well as the lack of a super-Earth in the present-day Solar System.

Mike Brown was a content advisor for Incoming! and presented a lecture at Morrison Planetarium in October 2015 about objects in the outer solar system as part of the Benjamin Dean Lecture Series, teasing the audience about the possibility of a “true ninth planet.” Livio also presented Dean Lectures at the Academy in 2001 and 2013. –Bing Quock

Another New Companion for the Milky Way

From the Southern Hemisphere, stargazers can spot two companions to the Milky Way Galaxy—a pair of faint, fuzzy smudges of light known as the Large and Small Magellanic Clouds, both easily observed with the unaided eye. Known to the Persian astronomer Al Sufi in 964, these were named after Ferdinand Magellan, who organized the first circumnavigation of the globe in 1519–22, and are classified as “dwarf galaxies.” About four dozen galactic companions are known, comprising a subgroup of the larger Local Group, the loose aggregation to which the Milky Way belongs, along with two other large galaxies—the Andromeda Galaxy and the Triangulum Galaxy—each with its own swarm of smaller companions.

Astronomers have just added one more galaxy to the Milky Way’s posse—one that Gabriel Torrealba and colleagues at the University of Cambridge have dubbed “the feeble giant.” In a paper submitted to arcXiv.org, a pre-print repository administered by Cornell University, the team identifies the galaxy as the Crater 2 dwarf (after its location in the springtime constellation Crater the Cup). It’s invisible to the human eye and has gone undiscovered for so long because its stars are so sparsely distributed across a diameter of perhaps 7,000 light years. This would make it the fourth largest of the Milky Way’s companions, after the Magellanic Clouds and a third known as the Sagittarius Dwarf Elliptical Galaxy (SagDEG).

The interesting thing about these companions is that the gravity of the Milky Way could be either tearing them apart, or pulling them toward each other for an eventual merger. Astronomers have suspected that this would explain the irregular shapes of the Magellanic Clouds, and SagDEG is thought to be in the process of being similarly disrupted. According to Torrealba, the Crater 2 dwarf is near a group of three other recently-discovered dwarf galaxies and a globular star cluster that may all be falling in toward our galaxy—an act of “galactic cannibalism” that may be how the Milky Way got to be so big: by gobbling up smaller galaxies. Food for thought. –Bing Quock