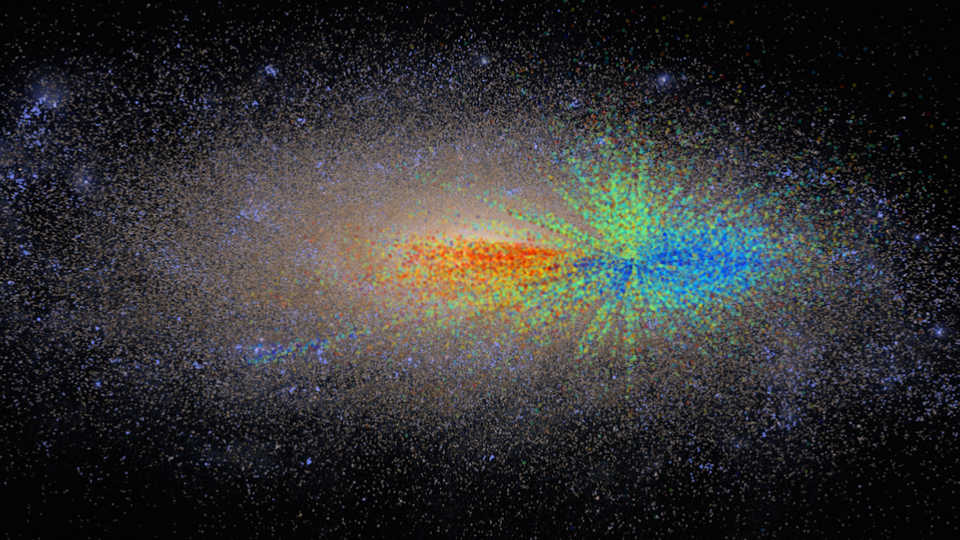 For today’s stories from the 227th Meeting of the American Astronomical Society (AAS) held this week in Kissimmee, Florida, I’m going to stay fairly close to home (in one way of describing it) by sharing new discoveries related to our Milky Way Galaxy.

The Milky Way is home to hundreds of billions of stars, including our sun. From one side to the other, our spiral galaxy spans about 100,000 light years: meaning that light, the fastest thing we know, travelling at 186,000 miles (300,000 miles) per second, takes 100,000 years to cross from one side of the galaxy to the other. Right there, we have several numbers, all of which are pretty hard to wrap our brains around… Hundreds of billions? That’s dozens of stars for every person on Earth. 186,000 miles (300,000 kilometers)? That’s more than seven times around Earth. 100,000 years? That’s roughly as long as our species has existed on this planet.

So, two stories from the local news, taking that perspective…

Melissa Ness of the Max Planck Institute for Astronomy described her work using the latest data from the Sloan Digital Sky Survey (SDSS), which has transformed astronomy by observing spectra (plural of “spectrum,” basically light fingerprints) of millions of objects both near and far. From an object’s spectrum, astronomers can determine what it’s made out of, how quickly it’s moving or rotating, and much more. Ness and her collaborator Marie Martig worked with stellar spectra from the SDSS Apache Point Observatory Galaxy Evolution Experiment (APOGEE) to determine the masses and ages of stars in the Milky Way Galaxy.

By design, APOGEE includes thousands of stars that have also been observed by the Kepler mission. Kepler measures the light curves of stars (changes in their brightness over time), which, taken together with APOGEE’s spectra, allowed Ness and Martig to determine the masses of the stars. No mean feat in and of itself, but then, knowing the masses of these stars, the astronomers could look for similar stars in the larger APOGEE data set (about 150,000 of ’em altogether) to associate masses with them as well… And then estimate ages of 70,000 stars (in this case, red giants) based on their known masses! Ness and Martig had to devise whole new methods and techniques to accomplish this, resulting in an unprecedented map of stars’ ages in the Milky Way.

One press release includes an illustration of the results: the oldest stars appear (colored red) in the direction of the galactic center, while younger stars (colored blue) are concentrated along the plane of the Milky Way and flare outward in the direction away from the galactic center (see image above). As Ness noted, “The Milky Way formed from the inside out.” Not a surprise, honestly, but with the added details about individual stars, we can improve our understanding of how the galaxy took shape.

(If you’re itching for SDSS results farther from home, check out their page of recent press releases. Today’s announcements included news about distant galaxies and a missing quasar, all far, far outside our galaxy.)

The Milky Way includes not just stars but gas and dust as well, and astronomers can study the gas in particular to tease out features of the galaxy. But an announcement at this AAS meeting hints at a new technique, dubbed “galactoseismology” by Sukanya Chakrabarti of the Rochester Institute of Technology.

Chakrabarti noted ripples in Milky Way gas distribution, and like any good scientist, she asked what would cause such a thing… Her insight was to seek out a disruption to the gas, much like an earthquake disrupts Earth’s mantle, sending seismic waves through our planet’s interior. Thus, “galactoseismology” was born.

Her computational models suggested that the ripples could result from a dwarf galaxy interacting with (you could say “colliding with”) the Milky Way: a relatively small collection of stars speeding through the galactic plane and leaving galactoseismic waves in their wake. She made the prediction in 2009, but it proved terribly difficult to confirm. Because the interaction occurred in the plane of the Milky Way (the part most crowded with stars, particularly those young’ns that Ness identified), looking for the small number of stars involved in the collision was seemingly impossible.

Her estimates indicated that the remnants of the dwarf galaxy should lie about 300,000 light years distant on the far side of the Milky Way. Talk about a needle in a haystack! Luckily, nature provides astronomers with a few powerful tools for determining distance, including rather bright and reliable Cepheid variables. Cepheid stars pulsate with a rhythm that depends on their brightness, so if you know the beat of the stellar tune, you can determine the star’s distance. (Astronomers call Cepheids and related phenomena standard candles, because their predictable brightness allows for the calculation of their distance, like knowing that a dim light bulb of known wattage must be farther away than a brighter light bulb of the same wattage.) Chakrabarti and her colleagues went off in search of Cepheids in the part of the sky where she expected to find the dwarf galaxy that impacted the Milky Way.

And this week, she announced success! After discovering Cepheids and confirming they resided about 300,000 light years away, her team also measured the speed at which the Cepheids (and by extension, their home dwarf galaxy) were speeding away… About 450,000 miles (around 725,000 kilometers) per hour! Just about right for the intergalactic event that created ripples in the Milky Way’s gas.