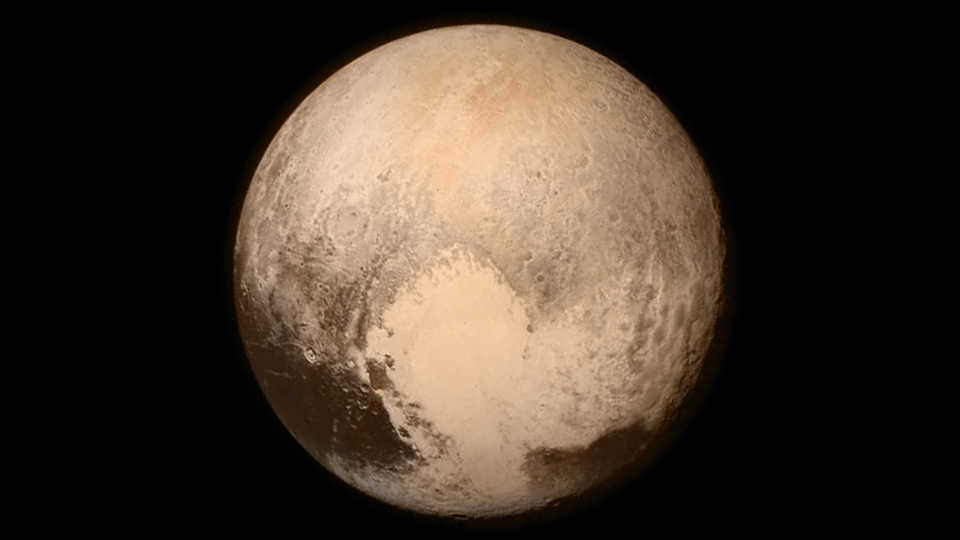 ­Discoveries in the Pluto System

The feeling in the air was electric at Wednesday’s NASA press conference, where representatives from international media saw the release of high-resolution images and early science from the New Horizons flyby of Pluto, now confirmed as the largest known object in the Kuiper Belt just beyond the orbit of Neptune. Scientists revealed pictures of a dynamic world with 11,000-foot (3,500-meter) mountains of ice and relatively few impact craters, indicating geologically-recent resurfacing—not just on Pluto but also on its largest moon, Charon. Indeed, the announcement that Charon is “active” drew a round of excited applause.

Speaking of the moons first, the team—led by principal investigator Alan Stern—started with Pluto’s outermost known moon, Hydra (what Stern jokingly referred to as “Hydra-therapy”). Taken from a distance of about 400,000 miles (650,000 kilometers), the image of the tiny, irregularly-shaped moon is heavily-pixelated, yet its two-mile-per-pixel resolution indicates visible dimensions of 28 miles by 19 miles, or nearly twice the size of Phobos, the bigger of Mars’s two moons. No distinct surface features are discernable, but variations in brightness can be seen, suggesting a reflectivity of about 45% (that is, reflecting nearly half the light hitting it), which in turn is interpreted as a result of bright water-ice covering parts of the surface. “New Horizons has finally nailed the basic physical properties of Hydra,” says Hal Weaver, New Horizons project scientist. “We’re going to see Hydra even better in the images yet to come.”

Turning to the large, 790-mile (1,270-kilometer) diameter moon Charon, the scientists displayed a crisp image that revealed a prominent dark patch resembling a mare on Earth’s Moon. In a reference to J.R.R. Tolkein’s “Middle Earth” series, imaging team scientists have unofficially dubbed this area “Mordor.” Also visible in the image is a long, deep crevice estimated to be four to six miles deep. Stretching across the center of the moon’s image and spanning 600 miles (1,000 kilometers) is a series of cliffs and troughs of unknown origin. And of course, there are surprises, including the apparent lack of craters on Charon—fewer than on similar-size moons, such as Dione or Tethys, which circle Saturn. The low number of craters indicates that the surface of Charon has been fairly recently covered over, and exactly what happened has scientists mystified. Understanding the processes involved will come from deductions based on a careful count of the number and distribution of craters seen on Charon’s surface.

As for Pluto itself, the science team announced that they had also unofficially named the bright, heart-shaped region visible on Pluto’s surface “Tombaugh Regio,” in honor of Pluto’s discoverer, Clyde Tombaugh, some of whose ashes are carried aboard New Horizons. A narrow-angle, high-resolution image of a region on the edge of Tombaugh Regio showed the aforementioned tall mountains, which scientists believe are composed of rock-hard water ice, as neither nitrogen or methane ices would be strong enough to hold together to that height.

Like Charon, Pluto also displays a relatively small number of craters, which indicates recent resurfacing and puzzles planetary scientists. Other moons have shown internal activity, such as Jupiter’s volcanic Io and Europa with its sub-surface ocean, or Neptune’s largest moon, Triton, with its active geysers. These moons orbit giant planets whose colossal gravity flexes and stretches the moons, warming their interiors and driving processes that cover old craters with fresh layers of ice or lava. In the absence of such a huge body, what causes the recent resurfacing that we see on Pluto and Charon? Speculation is that there might be ice-volcanoes or geysers, as on Triton, but none have been seen so far, so at this very early stage, planetary scientists are considering other possible mechanisms, such as heating from the decay of radioactive elements, as on Earth.

Another phenomenon currently observed on Pluto and no other body in the Solar System is the “hydrodynamic escape” of its atmosphere into space. Understanding this process and how it interacts with the amount of solar energy the planet receives can help to understand the process as it occurred in the past on other planets, including the primordial Earth.

Scientists will surely be surprised by findings released in future press conferences, and although New Horizons is now millions of miles beyond Pluto, it will take 16 months for all of the data from the encounter to be sent to Earth in small packets at a slow transmission speed carried by a very weak signal. Meanwhile, New Horizons presses farther into the Kuiper Belt for one more encounter with a member of this far-flung zone of the solar system, sometime in 2018 (see below). Stay tuned—there’s more to come from this hardy space traveler whose journey is far from over! –Bing Quock

After a triumphant visit to the Pluto-Charon system, what’s next for New Horizons? When traveling about eight miles (nearly 13 kilometers) per second with no fuel to slow you down, hanging around is not an option. After taking photos of Pluto and Charon, stockpiling spectroscopic data and atmospheric measurements, and beginning the laborious transmission back across the ever increasing distance to Earth, New Horizons will likely start a new mission objective—exploring a second Kuiper Belt Object.

Back in 2014, the Hubble Space Telescope examined New Horizons’ trajectory and tried to find something out there that would be a likely second target for a flyby… Easier said than done: it took a while to pick out candidates since they are dim and far from the Sun! Hubble was able to put forward a few candidates, dubbed PT (for “Potential Target”) 1 through 5. After evaluating these targets, PT4 and PT5 were quickly crossed off, along with PT2 a while later, but PT1 and PT3 are still possible targets.

What are they like? We will not know for a while, since the nearer (and most likely smaller) PT1 is dimmer. It is officially designated 2014 MU69 and could be reached within four years. It lies closer to New Horizons’ current trajectory and wouldn’t require as much of an expenditure of propellant to change direction, but there are concerns that later course corrections might be propellant intensive, since its dimness implies some uncertainty about its exact position. In contrast, PT3, also known as 2014 MT70, would require more of the remaining resources to reach, but it could be a valuable scientific target due to its larger size and greater distance from the Sun.

Thankfully, this decision does not have to be made for a few months yet, so the New Horizons team can rest for a few weeks and collect the data that have been eagerly awaited for years. The craft still has power and propellant enough for now, with some hope that perhaps a third target might one day be possible, but who knows what’s on the horizon? –Josh Roberts

Black Hole Too Big for its Galaxy

And now for something completely different…

Just because media attention has been focused on New Horizons’ historic flyby of Pluto, it doesn’t mean other astronomy research has come to a halt.

An article published in Science this week describes something quite the opposite of a local dwarf planet—an “over-massive” black hole detected in a typical star-forming galaxy 11.7 billion light years away, putting it at about two billion years after the Big Bang.

Most galaxies are thought to have supermassive black holes millions times more massive than our Sun, at their center, usually making up 0.2-0.5% of the mass of the entire galaxy. Black hole CID-947, however, is quite a bit larger. “The black hole has roughly one-tenth (10%) of the mass of the host. The black hole is massive compared with the normal host galaxy,” said Benny Trakhtenbrot, of the Swiss Federal Institute of Technology. “The measurements correspond to the mass of a typical galaxy. We therefore have a gigantic black hole within a normal-size galaxy.”

CID-947 appears to have grown much faster than its host galaxy, and faster than current models would have predicted. Not only that, but star formation also still continued along with the black hole’s expansion, challenging theories that radiation and gas emitted by expanding black holes would stifle the creation of new stars.

The incredible find, however, does support research that suggests black holes may have grown incredibly rapidly in the early universe, when it was on average much smaller (and thus denser) than it is today. This could have helped black holes back then consume “an almost continuous inflow of gas without ‘burping’ too much of it back into the galaxy,” Trakhtenbrot said. –Elise Ricard