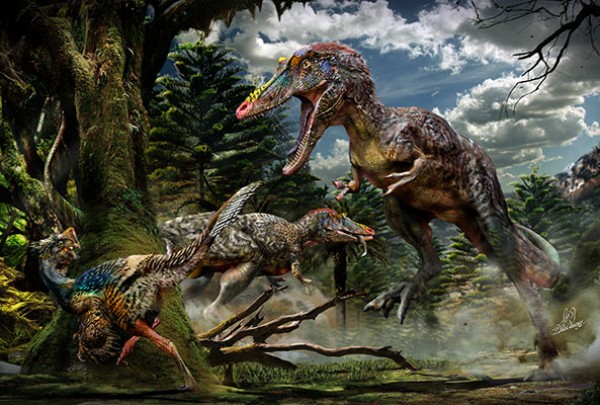 Although they weren’t actually dinosaurs, pliosaurs were some tough marine creatures in the Jurassic. Up to 49 feet long, these top ocean predators had strong jaws and sharp teeth and would’ve been scary to bump into in dark corners of the sea 100 million years ago. But, as New Scientist reports this month, the reptiles did have a sensitive side.

Using a groundbreaking technique of looking at CT scans of pliosaur fossils, British scientists determined that the nerves connecting the snout to the brain were very sensitive. Recent research found the same is true in modern day alligators and crocodiles (see our Science Today video for more). And this keen sense of touch might have served a similar purpose in early reptiles as it does today. Lead author Davide Foffa told New Scientist, “This kind of sensing system would have complemented the animals’ vision in turbid water,” to help catch  prey, perhaps.

From sensitive to tough… Another study using groundbreaking techniques was published this week in the Journal of the Royal Society Interface. Researchers at the University of Manchester, using synchrotron-imaging techniques, discovered that many predatory dinosaurs shrugged off the impact of massive trauma. Fossil bones often showed a multitude of grizzly injuries that had healed on their own, but would prove fatal to humans if not medically treated.

“It seems dinosaurs evolved a splendid suite of defence mechanisms to help regulate the healing and repair of injuries,” says Phil Manning, one of the authors on the paper. “The ability to diagnose such processes some 150 million years later might well shed new light on how modern medicine might use Jurassic chemistry in the 21st Century.”

Speaking of tough… Meet the Dobermann dinosaur, or Pinocchio rex, as some are calling this new species of dinosaur discovered in Mongolia (pictured above). Its name comes from its elongated skull and long, narrow teeth—creating quite a snout compared to its tyrannosaur brethren. Qianzhousaurus sinensis (its real name) lived until around 66 million years ago, when all of the dinosaurs became extinct, likely as the result of a deadly asteroid impact. “This is a different breed of tyrannosaur,” says study co-author Steve Brusatte. “It has the familiar toothy grin of T. rex, but its snout was much longer and it had a row of horns on its nose.  Though Iit might have looked a little comical, but it would have been as deadly as any other tyrannosaur, and maybe even a little faster and stealthier.”

And one quick non-dino headline we didn’t want you to miss… Remember when we reported on Kelp Watch 2014—an effort led by California scientists to test West Coast waters for Fukushima radiation? Well, the results are in from the first samples and there were NO Fukushima radioisotopes discovered in West Coast Giant Kelp or Bull Kelp.