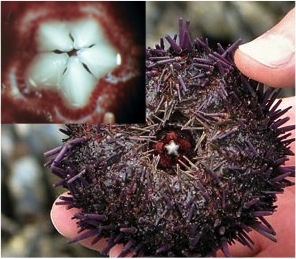 To survive in a tumultuous environment, sea urchins literally eat through stone, using their teeth to carve out nooks where the spiny creatures hide from predators and protect themselves from the crashing surf on the rocky shores and tide pools where they live.

Scientists agree that the rock-boring behavior is astonishing, but what is truly remarkable is that despite constant grinding and scraping on stone, urchin teeth never, ever get dull. The secret of their ever-sharp qualities has puzzled scientists for decades, but now a new report in the journal Advanced Functional Materials has peeled back the toothy mystery.

Pupa Gilbert, of the University of Wisconsin-Madison, and her colleagues studied the self-sharpening mechanism used by the California purple sea urchin to keep a razor-sharp edge on its choppers.

“The sea urchin tooth is complicated in its design. It is one of the very few structures in nature that self-sharpen,” says Gilbert, explaining that the sea urchin tooth, which is about .8 of an inch long, is a biomineral mosaic composed of calcite crystals with two forms -- plates and fibers -- arranged crosswise and cemented together with super-hard calcite nanocement.

Between the crystals are layers of weaker organic material. By striking the teeth with microscopic, diamond-tipped probes, the scientists found that the teeth break along these organic layers.

The scientists think the organics are predetermined weak spots in the teeth that allow parts of the material to "tear" away, similar to perforations in a sheet of paper. This means the teeth, which grow continuously, can regularly shed damaged areas to keep a well-honed edge.

Knowing the secret of the ever-sharp sea urchin tooth, says Gilbert, could one day have practical applications for human toolmakers. “Now that we know how it works, the knowledge could be used to develop methods to fabricate tools that could actually sharpen themselves with use,” notes Gilbert. “The mechanism used by the urchin is the key. By shaping the object appropriately and using the same strategy the urchin employs, a tool with a self-sharpening edge could, in theory, be created.”