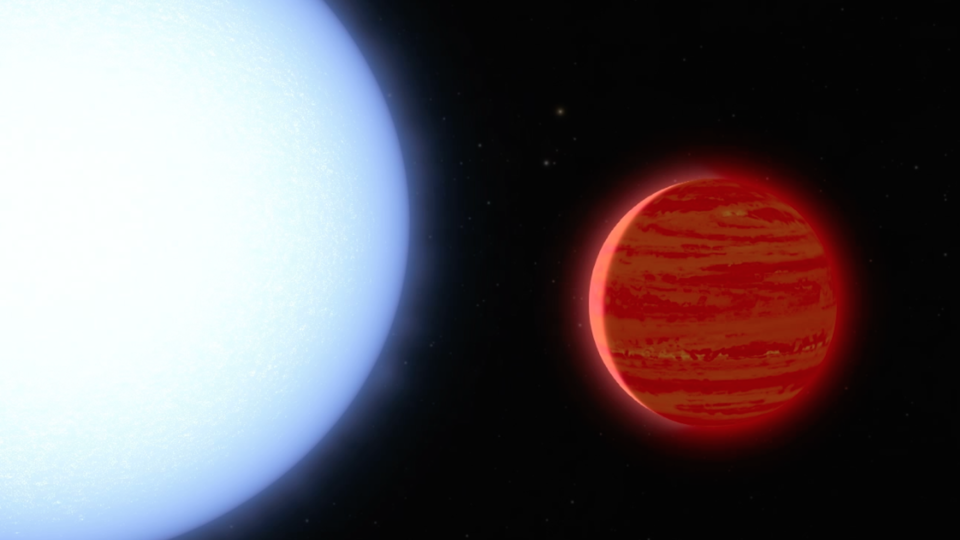 Today’s announcement of the hottest known exoplanet arrives just days after a completely separate announcement about the discovery of a cool failed star relatively close to the Sun.

The planet shatters the record for hottest yet discovered. Blasted by ultraviolet radiation from its parent star, the Jupiter-sized planet KELT-9b has a dayside temperature approximately the same as the surface temperature of a K star—just slightly cooler than the Sun!

The chilly “star” (really a brown dwarf, which skirts the categories of planet and star) doesn’t set any records, but it’s only slightly warmer than the planet Jupiter. And it’s so faint that standard sky surveys failed to pick it up.

A planet hotter than a star? A “star” nearly as cool as a planet? Aren’t stars supposed to be hot and planets cool…? Were our elementary school textbooks lying to us or what?

These discoveries reveal that nature doesn’t follow the neat categorizations that humans prefer. Instead, science is revealing a universe of phenomena that grow seemingly more complex as we uncover more details. And researchers are upgrading their toolkit of techniques to find more oddballs and outliers. Both these recent announcements relied on approaching the scientific process a little bit differently…

KELT-9b is not a typical planet. Astronomers estimate its dayside temperature at 4,300°C (7,700°F), which will likely cause molecules to split apart and the planet’s atmosphere to evaporate. The high price a planet pays for residing around a hot, short-lived A star with a surface temperature nearly twice that of the Sun! We have discovered only six planets in orbit around A stars (out of the thousands known exoplanets), which makes KELT-9b an important find, that can help astronomers understand how planets evolve around such scorching stars.

The planet gets its name from the telescope that discovered it, and KELT is not a typical telescope: the acronym stands for the “Kilodegree Extremely Little Telescope.” In an era when observatories tend to build bigger and bigger telescopes, KELT stands out for taking a different approach. The KELT North project seeks out interesting exoplanets by focusing attention on relatively bright stars, which allows for follow-up observations by bigger telescopes that can tease out detailed properties of the exoplanets’ atmospheres. As you might guess, KELT-9b is part of the ninth system the project has discovered.

Looking at the list of 60 authors on the Nature paper announcing the KELT-9b result, you begin to realize what a collaborative effort modern astronomy is… The 60 astronomers come from 45 different institutions around the globe! It’s nice to know that science can still bring people together. Lots of people!

The brown dwarf researchers took a very different approach to collaboration. The newly-discovered planet is the first to be announced by the Backyard Worlds project, which relies on a network of more than 37,000 volunteer citizen scientists to help sift through copious amounts of data. Talk about lots of people coming together to do science! (The project is looking for both brown dwarfs and the predicted ninth planet in our solar system, since the two phenomena can be spotted in the same data.) Less than a week after the website launched in February, four different users reported the discovery of an unusual object, and after follow-up observations confirmed that they’d found a brown dwarf about 100 light years away, they wrote a paper and made the announcement last week.

(By the way, Backyard Worlds was spearheaded by astronomer Jackie Faherty, who did the follow-up observations to confirm the brown dwarf. I wrote about a night of observing with Jackie in a threepartarticle that appeared on the Academy’s website four years ago…)

As scientists get more and more creative about approaches to making discoveries—whether it’s using an “extremely little telescope” or deploying citizen scientists as collaborators—we can expect to find more surprises in the increasingly complex universe we inhabit.