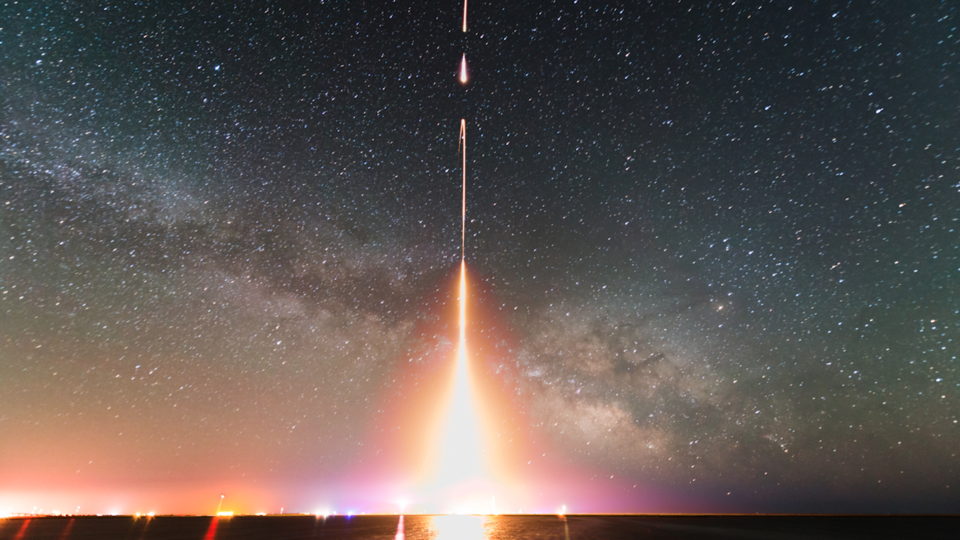 With the recent news of the failures of the Antares resupply mission (see below) and the Virgin Galactic crash, here are some space travel silver linings: student spaceflight projects will continue, an MIT scientist sees asteroids in the near future of human spaceflight, and sounding rockets observe orphaned stars.

When Orbital Sciences’ privately-built Antares rocket exploded in a launch catastrophe on October 28th, the Cygnus commercial cargo vehicle atop the rocket—loaded with roughly a ton of supplies intended for the International Space Station—was lost in a ball of flames.

Comprising roughly a quarter of the cargo weight were eighteen science experiments submitted by students in grade schools and colleges throughout the U.S. and Canada, selected from nearly 1,500 proposals. These were projects designed to study the effect of microgravity on the growth of various crystals, plants, and invertebrates, or on certain biochemical interactions, all under the umbrella of the Student Spaceflight Experiments Program, which gives students the opportunity to design, implement, and analyze scientific experiments conducted in space.

At first, it was incorrectly reported that an experiment from seventh- and eighth-grade students at Bay Area schools Mark West Charter and Riebli Elementary had also been destroyed, but this turned out not to be the case, much to the relief of the students. Their experiment had been sent to the Space Station earlier in the summer and returned to Earth on November 1st. However, patches the students had designed commemorating their experiment were traveling aboard the ill-fated Antares and were lost in the explosion.

Undaunted by the accident, students who lost their work were described as “resilient“ by their teachers, understanding that failure is part of the learning process and resolving to trying to get their experiments launched on a future flight—perhaps even on Orbital competitor SpaceX’s resupply mission in December.

A comment in Nature last week describes how we have to get beyond our fears of asteroids striking the Earth (a real fear, to be sure), and look at how we can use these space rocks to further human spaceflight. Author Richard Binzel of MIT describes the current plan to survey NEAs, or Near Earth Asteroids, as a fine and necessary idea, and he suggests using this new map to test how asteroids could become stepping stones for a manned mission to Mars.

There are plenty closeby to start with, he says. “The first missions might last weeks and not go far; later excursions could last months and venture successively farther into interplanetary space, proving that Mars is within our grasp.” He brings the subject up now in hopes that Obama will make it a funding priority in the 2015 federal budget. (Although the new congress could make that an uphill battle…)

A small rocket with a big finding

NASA’s sounding rocket experiment, the Cosmic Infrared Background Experiment, or CIBER, returned results this week that may redefine what we know about galaxies. Publishing in today’s edition of Science, a team of scientists reports CIBER detected a surprising surplus of infrared light in the dark space between galaxies. The glow is thought to be from “orphaned” stars flung out of galaxies. This could mean that galaxies don’t have a set boundary of stars, but instead stretch out to great distances, forming a vast, interconnected sea of stars.

“The light looks too bright and too blue to be coming from the first generation of galaxies,” says study co-author James Bock, principal investigator of the CIBER project from Caltech and JPL. “The simplest explanation, which best explains the measurements, is that many stars have been ripped from their galactic birthplace, and that the stripped stars emit on average about as much light as the galaxies themselves.”

“It is wonderfully exciting for such a small NASA rocket to make such a huge discovery,” says Mike Garcia, program scientist from NASA.