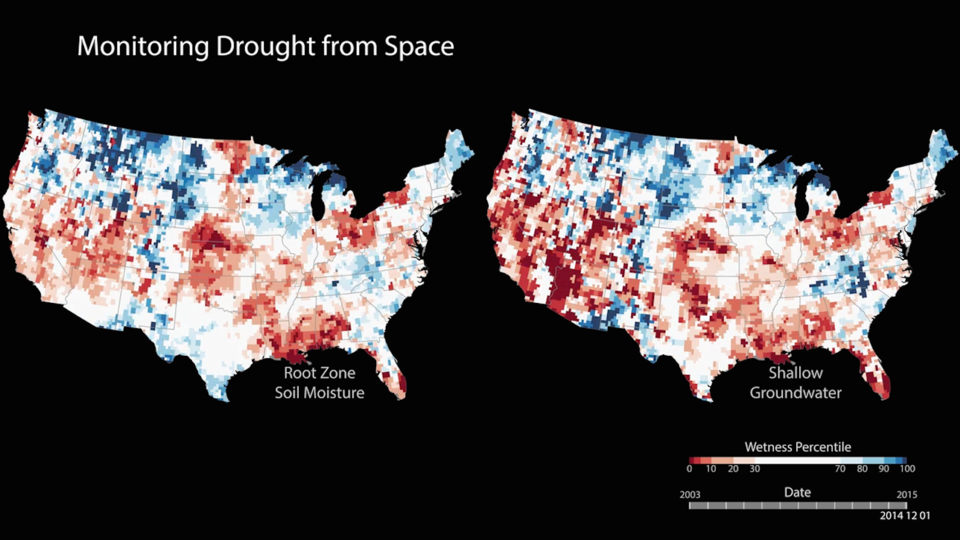 Are you wondering how California can still be drought-stricken, despite all of the rain we’re receiving? Well, believe it. NASA scientists, reporting this week at the American Geophysical Union (AGU) meeting in San Francisco, quantified the amount of water needed to replenish California’s losses due to the three-year drought: 11 trillion gallons, or 42 cubic kilometers.

How can they get so exact? Satellite data. The GRACE satellite was launched in 2002 to measure Earth’s shape and gravitational field, and it can actually detect how much water is gained and lost on a monthly basis. The other data come from the Airborne Snow Observatory (ASO), which provides high-resolution observations of the snowpack in the Sierra Nevada and elsewhere. (We wrote about ASO’s first data collections last year.)

“The 2014 snowpack was one of the three lowest on record and the worst since 1977, when California’s population was half what it is now,” says ASO principal investigator Tom Painter of JPL. “Besides resulting in less snow water, the dramatic reduction in snow extent contributes to warming our climate by allowing the ground to absorb more sunlight. This reduces soil moisture, which makes it harder to get water from the snow into reservoirs once it does start snowing again.”

At the AGU meeting, Jay Famiglietti of NASA’s Jet Propulsion Laboratory (JPL) described how the GRACE data can determine when the drought began in 2011, and how much water is needed to get back to normal conditions at a specific time of year. He likened the current deficit to the equivalent of ten Lake Orovilles or one-and-a-half Lake Meads.

Two-thirds of the depletion is in groundwater losses in the Central Valley, which GRACE is also able to observe in great detail. Data show we’re losing about ten cubic kilometers per year, and it’s directly correlated with the amount of surface water the state allocates each year—the more allocated, the more groundwater lost. Famiglietti compares it to a tennis ball bouncing down a flight of stairs, “without intervention, we will lose all of the groundwater.”

“It takes years to get into a drought of this severity, and it will likely take many more big storms, and years, to crawl out of it,” says Famiglietti.

With the current (and hopefully future) rainfall in the new year, perhaps future data from GRACE and ASO will provide slightly wetter pictures, and a smaller number than 11 trillion gallons.