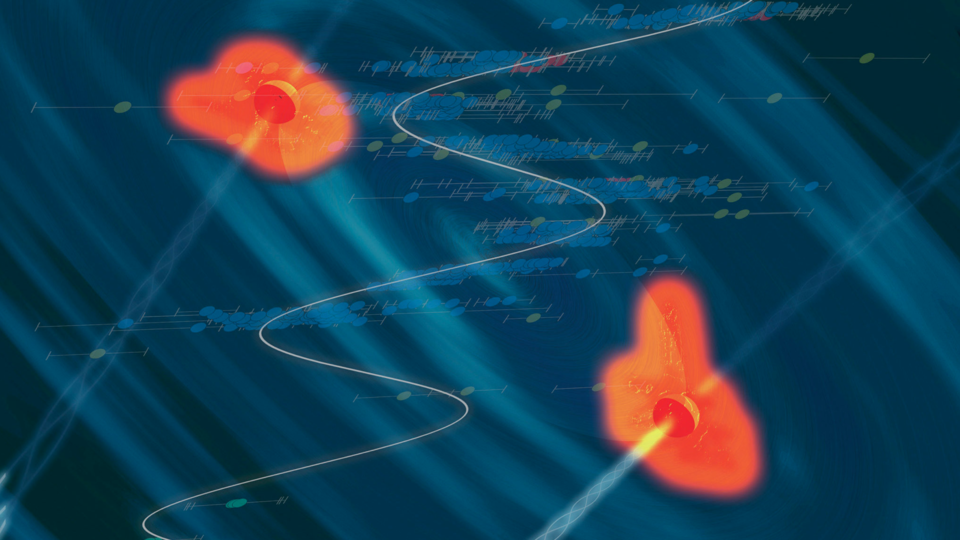 Of Unicorns and Pulsars

“It’s like finding a unicorn, then it also turns out to be a baby unicorn,” said Joeri van Leeuwen of the Netherlands Institute for Radio Astronomy, describing the discovery of pulsar J1906+0746 during a press conference at the 225th meeting of the American Astronomical Society in Seattle this week.

And then, shortly after the unicorn is spotted, it vanishes…

In 2004, J1906 basically appeared out of nowhere—a very bright, rapidly-fluctuating radio source detected at the Arecibo Observatory. Radio astronomers know these phenomena well, rapidly-spinning stellar lighthouse beacons known as pulsars. Tiny, city-sized stars spin at incredible speeds, focusing radiation in narrow beams we can detect only when we lie directly in their path.

In the case of J1906, it spins once every 144 milliseconds. That’s right, a star the size of San Francisco spinning almost seven times a second!

Turns out these things are relatively easy to spot and the sky is well studied, so radio astronomers don’t expect to find new ones very often.

But it gets weirder. Evidence indicated that J1906 also seemed to have an invisible companion, with the two objects orbiting each other every four hours—as rare as a unicorn, in van Leeuwen’s analogy. Estimates of the age of the system suggested it was very young in astronomical terms, only about 100,000 years old—thus a baby unicorn.

Van Leeuwen and his collaborators set out to deduce the properties of the invisible companion, and they announced their results this week. Through precision measurements of the system’s attributes, they figured out that the mystery object has about the same mass as the pulsar, so it could be either a neutron star or a white dwarf. But the two objects are in such a tight orbit (zipping around each other every four hours, remember) that their gravitational influence on one another has some very strange consequences…

Good ol’ Einstein gave us the Theory of General Relativity just a century ago, and it makes strange predictions about the behavior of objects in intense gravitational fields. We usually describe this as a warping of space-time, and in the case of the pulsar and its companion, it means that the pulsar’s rotational axis is shifted tiny bit with each orbit. (Van Leeuwen and his team produced a couple great animations showing how this all works.) These tiny changes add up to about two degrees per year. Not much, but…

That’s why the unicorn is disappearing. Over time, the pulsar’s lighthouse beacon no longer lines up with Earth, so we no longer see the flash of the pulsar’s radiation as it spins on its axis. Thus, the unicorn appears out of nowhere in 2004, and eventually fades from view a decade or so later…

But mark your calendars! By van Leeuwen’s estimate, the unicorn will reappear in 2170.

This week, scientists using ground-based telescopes and running hundreds of thousands of computer simulations announced that they have discovered a potential supermassive black hole merger. The Catalina Real-Time Transient Survey (CRTS) monitors light sources across much of the sky, and George Djorgovski of Caltech and his colleagues used the telescopes in the survey to focus on quasars that varied in brightness.

The researchers sifted through CRTS observations of 247,000 known quasars and discovered 20 candidates for these supermassive black hole pairs. And of these, they chose the quasar emitting from the galaxy PG 1302-102 to study more closely. It has a strong, clean signal that appears to repeat every five years or so. “It has a really nice smooth up-and-down signal, similar to a sine wave, and that just hasn’t been seen before in a quasar,” says Caltech’s Matthew Graham.

The short duration of repetition leads the researchers to believe that the two black holes are close to merging. “The black holes in PG 1302-102 are, at most, a few hundredths of a light year apart and could merge in about a million years or less,” says Daniel Stern, a scientist at NASA’s Jet Propulsion Laboratory.

This particular event could even “provide a preview of what will happen in our own Milky Way galaxy in a few billion years when it collides with the neighboring Andromeda galaxy” and the supermassive black holes at the center of each galaxy merge, according to the New York Times.

Over the past two and a half years, NASA’s Curiosity rover has gathered ample evidence in and around Yellowknife Bay that Mars used to be a much warmer and wetter place, far more suitable for life than it is today.

Now, Curiosity has returned images that some researchers are suggesting may show fossilized evidence of ancient microbial Martians!

Noffke is a world expert on microbially-induced sedimentary structures (MISS), which form when microbial mats interact with sediments in shallow water. Last year, Noffe reported the discovery of the potentially oldest signs of life on Earth, a 3.48 billion year-old microbial structure in the Western Australia's Dresser Formation.

Penelope Boston, a geomicrobiologist at the New Mexico Institute of Mining and Technology, notes, “Along with the recent reports of methane and organics on Mars, her findings add an intriguing piece to the puzzle of a possible history for life on our neighboring planet.”

Many are vigilant to note, however, that while Noffke has been extremely careful in her analysis, her report is not a definitive proof that these structures were shaped by biology. To collect evidence of this would require investigating the site itself with the proper tools and instruments, and most likely brings samples back to Earth, a feat that has yet to be accomplished.

“All I can say is, here’s my hypothesis and here’s all the evidence that I have,” Noffke says, “although I do think that this evidence is a lot.”

With science media buzzing over ESA’s Rosetta mission to Comet 67/P Churyumov-Gerasimenko, don’t forget that there’s another comet in the news right now—the “Christmas Comet” of 2014. From very dark locations, it has been spotted with the unaided eye as a fuzzy smudge.

While clearly not a so-called “Great Comet” bright enough to see without even trying, Comet C/2014 Q2 Lovejoy—or just Comet Lovejoy for simplicity’s sake—is easy to find. Currently passing the constellation Orion the Hunter, it’s well-placed for observing in the evening sky and within easy reach of binoculars, although more serious equipment and the right kind of camera are needed to observe the delicate, 4.4 million mile-long tail. Astronomers have been thrilled by the tail’s complex behavior, complete with several disconnection events where the tail or a portion of it appears to become detached from the comet’s coma.

Having passed closest to Earth on January 7, the comet is now moving away from us, but it is still approaching the Sun and will continue to brighten until shortly after it passes the Sun on January 30 and eventually returns to deep space. Comet Lovejoy will return to the inner solar system in about 8,000 years, so we recommend trying to spot it now!

(Images are available here or here.)

Delayed three times by technical issues, Space Exploration Technologies (SpaceX) is expected to launch its fifth Commercial Resupply Services mission (CRS-5) to the International Space Station on the morning of January 10, bringing with it 2.5 tons of supplies, science payloads including the Cloud Aerosol Transport System (CATS) to measure and map pollutants in the atmosphere, and an IMAX 70mm movie camera.

By the time many of you read this, you will already know if that flight has gone as planned. But the most attention-getting aspect of CRS-5 is not even one of the mission goals, and something NASA hasn’t even mentioned so far in any of its press releases about it. It’s part of SpaceX’s plan to develop the ability to reuse the first stage of its Falcon 9 booster by flying it to a landing pad and touching down vertically on extendable landing legs—something not even NASA can do.

This unprecedented capability is a cornerstone of SpaceX’s approach, which will ultimately capitalize on the reusability of its rocket components to reduce launch costs. The technology needed to fly the rocket to a pinpoint landing will be incorporated into the company’s Dragon spacecraft, which will eventually make powered landings on the ground after returning to Earth from space, rather than parachuting into the ocean and waiting for a pickup, which has been the NASA tradition since the days of the Space Shuttle.

Although the company has twice proved the concept of powered landings into water, SpaceX CEO/CTO Elon Musk downplayed expectations and said that the attempt to land on an unmanned football field-size landing barge had only a 50-50 chance of success. During the coming year, SpaceX will test a modified Dragon space capsule, dubbed “Dragonfly,” to see if they can give their Dragon space capsule wings of its own.