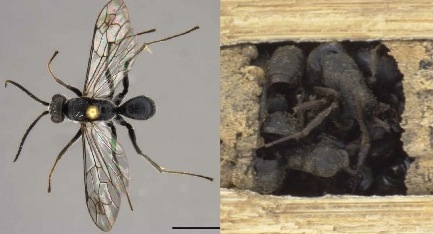 Meet Deuteragenia ossarium, a new species of spider wasp that lives in southeast China. Spider wasps get their names from the arachnids they parasitize—females catch and paralyze their victims, hide them, lay an egg and let their larvae use the spider as food, slowly killing their host until the larvae emerge as full-fledged wasps.

Some spider wasps construct nests for their larvae and spider hosts in cavities, digging holes or occupying pre-existing hidden pockets in wood or other substances. They may separate brood cells with thin walls of plant debris, resin, or soil. Once they’ve finished constructing the nest, laying eggs, and providing food (i.e. the spider), some females construct an outermost vestibular cell to close the nest. After construction, female wasps abandon the brood and do not care for their offspring anymore. But how do they know their larvae are safe from predators?

The scientists were surprised to discover that 73 of these nests “had a vestibular cell filled with dead ants,” according to a study published today in PLoS ONE. “These nests contained between one and six brood cells, each provisioned with a single Agelenidae spider,” the report continues. The species of ants varied—up to nine different species were tallied—but the dead ant nests only belonged to one species of spider wasp—and a new one at that!

The ant-carcass-protected nests had substantially fewer attacks from other parasitic wasps and flies, and the authors believe that the dead ants provide protective chemical cues that camouflage the wasp nest as a large ant nest.

The dead ants in the vestibule also give the new spider wasp its name—the bone- house wasp or Deuteragenia ossarium. Ossaries are ancient sites where human bones were deposited. “This reminds us of historical bone-houses in monasteries and graveyards, which over time were filled with piles of human bones,” the authors write.

“Our discovery demonstrates in an impressive way, what fascinating strategies of offspring-protection have evolved in the animal kingdom,” says lead author Michael Staab of the University of Freiburg.